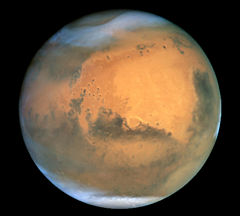 Twitter is all the rage these days. Taking the concept of a constantly updated Facebook or MSN status and running with it, there are thousands of users updating their every move via web or cell phone.

Yesterday afternoon the Mars Phoenix Lander posted this on its Twitter:

followed a bit later by:

Whoohoo! Was keeping my eye on some chunks of bright stuff & they disappeared! Sublimated! So it can’t be salt, it’s ice.

Those who know me know I’m a giant space and astrophysics nerd and I’m very excited by this news. Confirmation of water ice just below the surface further opens the door to the possibility that life may have existed in Mars’ less barren past. It’s not exactly Bradbury or anything, but even the presence of the building blocks of life is proof that Terra isn’t the only place in the solar system where life can be found.

I only hope that at some point in my lifetime we can place several high tech probes on Jupiter’s moon Europa since that’s the most likely place to find currently existing life. Like many I believe that the best chance of finding it lies deep under that crusty ice surface, probably surrounding volcanic vents much like the teeming colonies of life in similiarly inhospitable places in the deepest reaches of earth’s oceans.

As for those who could give a flying toot about life on other worlds remember this… a colony may survive by melting that subsurface ice some day (and it may be the beginning of terraforming mars in some distant future) and the only true guarantee of the survival of the human race is to get off this planet and start spreading even further. Shitty Bruce Willis movies aside, we’re one asteroid or comet away from extinction and we’re more than overdue.

Congrats to the Phoenix team, you’ve hit the jackpot already and the mission isn’t even half done.