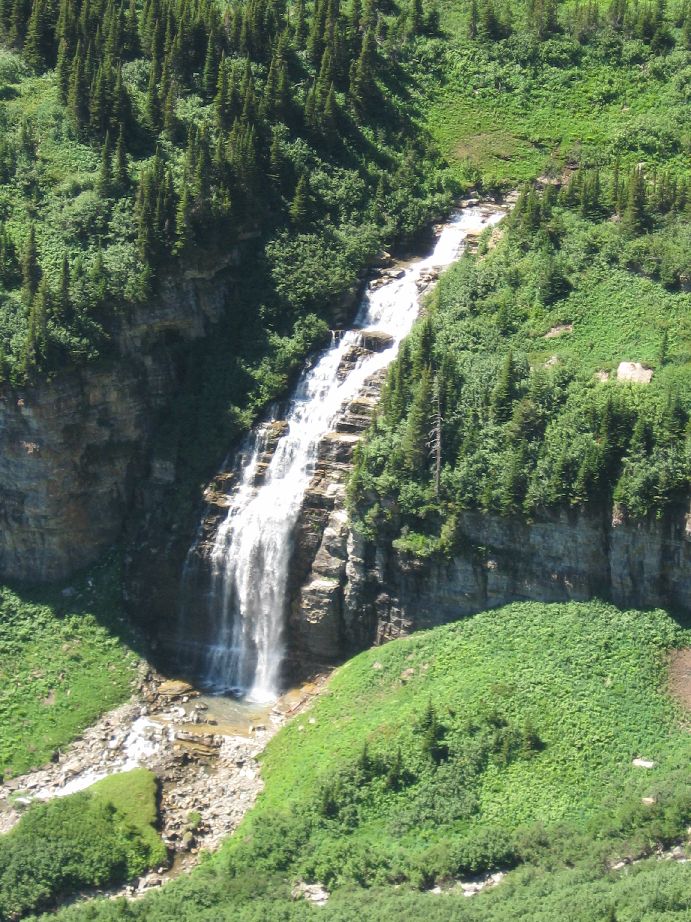 I love Glacier Park in Montana it’s one of the most beautiful places on earth and features the “Going to the Sun” highway. This wild trip up to the top of the mountain is a bit rough on the old transmission but it’s worth it for views like this.

Logan pass lies just above that waterfall and marks the start of the downward slope. Unfortunately the parking lot up there had about a 30 minute wait for a spot so I didn’t get to go for a hike. Glacier is also known for it’s mountain goats but we only really saw one specimen, far less than the 800 or so on my last visit. This one was a little bit closer though.

Heading down the mountain was less fun though. After getting stuck behind someone who’s car was obviously about to explode who was doing 12mph. Soon after we ran into this lovely sight.

A fantastic 30 minute wait to go through a one lane only lineup.

We had a rather large change in plans and day 5 was more or less a travel day. We ended up in Butte, Montana where we stumbled upon a pretty fantastic Mexican Restaurant. I heartily recommend Christina’s Cocina Kitchen in Butte if you’re ever there. Bring a map and the address though, it was a bitch to find.

Day 6: Idaho: Craters of the Moon

Due to our change in plans we ended up going down further south and checking out the Craters of the Moon National Monument in Idaho. It’s a fairly recent (geologically speaking) lava bed covering a good chunk of southern Idaho and while not really moon like (since it was named back in the 19th century that can be forgiven) it was fascinating.

It’s one of the only easily accessible lava beds in North America and has numerous flow remnants from multiple volcanic events over thousands of years. 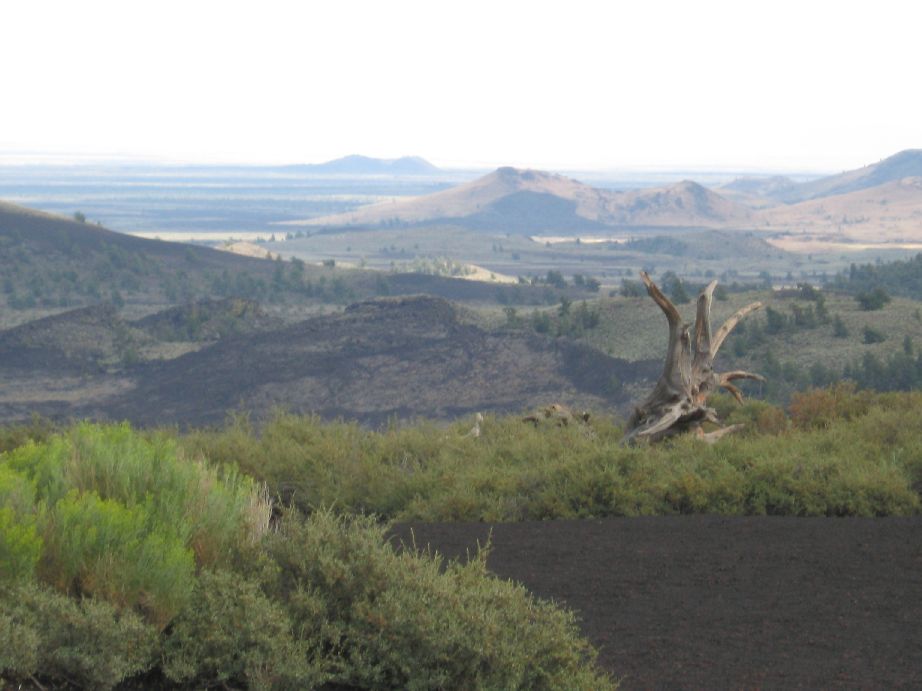 It was very hot though and we were baking by one of our later hikes. That view is from the top of a hill that seemed like a good idea at first but in truth was a 200 foot climb at an starting altitude that was rather vicious for those of us who are used to living a little closer to sea level. One of the fun things about the park is the “easily” accessibly lava tube caves. 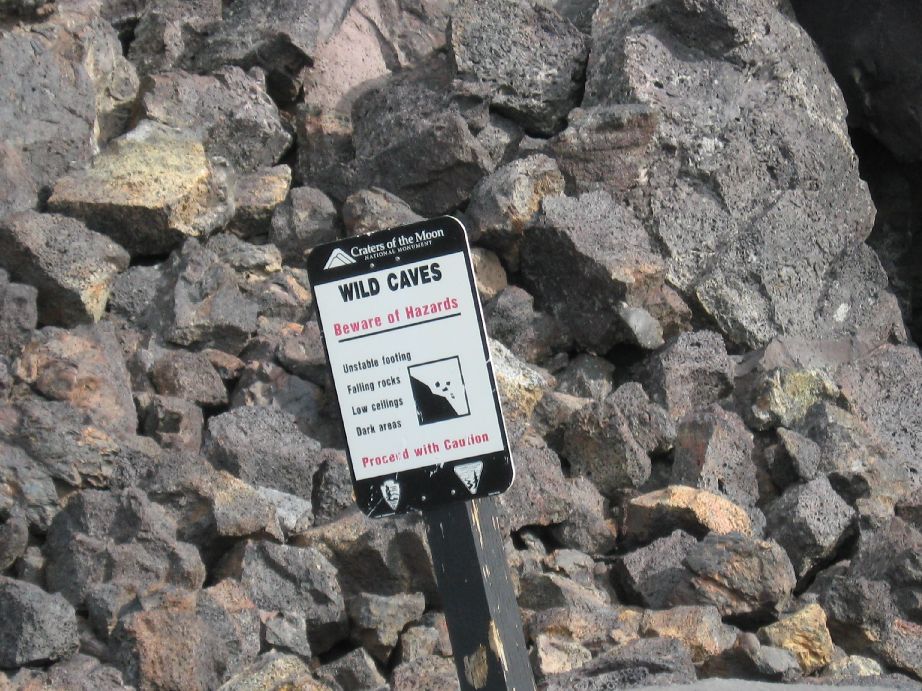 The inside was even darker, no way of really going inside without a flashlight. The walls were such bubbly looking porous rock that you could imagine the magma flowing there and slowly cooling.

This one in particular had a very tight opening that opened up into a wider cavern underneath. Once inside you found ice (lava is a very good insulator) with a layer of icy water overtop. That made up the entire floor of the cave so I didn’t go far. Here’s hoping for some more in depth spelunking later in the trip. 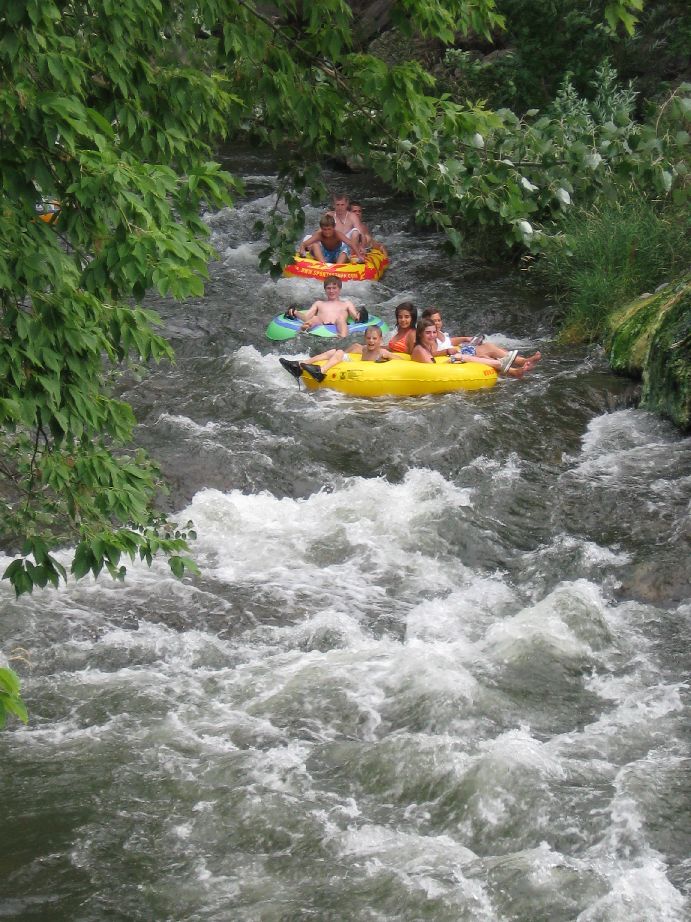 We almost ended up at Lava Hot Springs for a Time Share Condo. I’m glad we didn’t, it was a blast for a day, and likely would have been for two but likely would have been dull after that. We came for the (lovely) hot spring pools but also enjoyed some of the unexpected tubing. A bit wilder than the Apple River in Wisconsin closer to home (and a lot shorter ride) and lots of fun. Painful though, I’m nursing a gash in my hand and a massive thigh bruise at the moment.

Tomorrow we’ll actually be settling in for a few days in the same place and doing some Yellowstone and related touring and hopefully some real whitewater rafting.