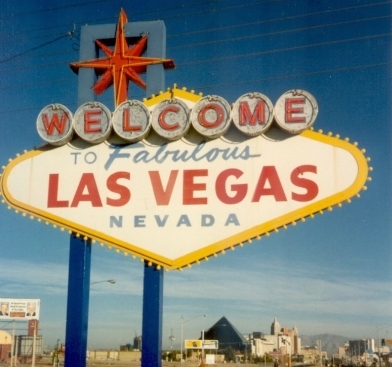 We are in the middle of a global economic recession. Though I certainly wasn’t in any doubt about it before, I had it systematically reinforced during my recent visit to Las Vegas. Things are bad in Sin City… and getting worse.

…more after the break…

I arrived late on a Wednesday night and (though admittedly it was hardly a peak time) the airport was deserted except for my flight. A thin stream of passengers from my A320 snaked through the empty terminal. Row after row of Wheel of Fortune machines chirped for attention, their vacant seats a portent of things to come. Passing into the main baggage hall things were a bit more lively, but after grabbing my wheel bag I was still able to grab a cab immediately from a waiting line set up for at least 500 people.

My cabbie on the way to Bally’s was a lively soul and on a journey made quite a bit longer by a minor accident in front of us on the way out of McCarran he told me quite a bit about the town. Jim told me that he was a former construction equipment operator unable to find a job and in the vegas of the past decade, that’s saying something. Over 20 major casino-resort projects in Las Vegas have been cancelled, with many more scaled back or on permanent hold. Perhaps the most glaringly obvious of these is the Echelon Place, a massive complex on the former site of the Stardust at the north end of the strip. Originally envisioned as a 5000+ room resort with multiple hotels and a massive casino and conference center, most of the outer section has since been cancelled and the core of the project (the 3000+ room main hotel) stands roughly 1/3 completed construction on hold since August of last year, and unlikely to resume before at least 2010. It’s a gaping hole at the north end of the strip and there is now a solid gap between Steve Wynn’s boring monstrosities and the friendly old Sahara (we need not mention the festering pit known as the Stratosphere)

Unfortunately, the (lack of) construction of the Encore had other dire consequences. As part of an elaborate land/casino/retail land swapping deal involving Harrah’s, the Encore Group, McDonalds, the Rand Corporation and the Reverse-Vampires the Westward Ho was purchased and closed. Apparently the shiny new McDonalds on the site was built as a replacement for the one on the encore site when Harrah’s bought the Ho. Harrah’s then flipped the Ho over to the Encore owners in exchange for the Barbary Coast (which is a pretty good deal in anyone’s book given the Ho’s miniscule strip frontage.) The dire consequence was of course the loss of the strip’s best deal…the 99 cent slurpee sized Margarita

The other two new mega projects on the strip that are still in full swing were nearing completion as we visited. City Center is truly ridiculous in scale though it at least has some interesting buildings. Fontainebleau on the other hand appears to be following the Wynn trend of unexciting design with a faux classiness that’s just as cheesy as the themed resorts in its own way. The Cosmopolitan’s problems appear to continue as I heard next to nothing about it while I was there and I bet the Jockey club owners are thrilled to lose their parking for no reason. Caesar’s continues their quest to fill every square inch of their property with new towers emblazoned with bare breasted “Roman” statues and the Planet Hollywood (nee Aladdin) is building a new eyesore of a tower for their ugly and boring casino.

The construction agency wasn’t the only area obviously feeling the pinch. Jim told me that the hookers had been getting far more aggressive, with plenty of robberies and a lot more busts. This certainly seemed to be borne out by later observations and cab conversations. Even the prices on the cards handed out by the cricket slappers were dropping into the cellar. As my friend the Professor pointed out… $35 seems underpriced even for the fattest and homeliest of vegas callgirls.

Signs of economic downturn were everywhere, after dumping my bags and going looking for my friends I noticed row after row of empty slot machines and unstaffed table games at what is normally at least a fairly busy time of night. By the time I finally caught up to my group at the Sahara I had really noticed just how few people there were on the sidewalks compared to my last visit. This was particularly noticeable on a visit to Fremont downtown where despite it being barely midnight on a Friday night the Experience was more or less completely shut down, and most casinos fairly empty. It’s especially unfortunate timing given that people have finally put some money into sprucing up some of these classic places again (the remodeled interior of the Nugget is gorgeous) and may have trouble recouping their investment without selling out to someone else. It also likely means that much needed facelifts on places like the (Union) Plaza are likely not happening, particularly sad for a place that was once Biff’s casino in Back to the Future II. It was all extra depressing, most of downtown succeeds on people being wild and having fun despite the extra seediness. Despite winning a solid $150 at Blackjack that night I had zero desire to return downtown for the rest of the trip.

Gaming wise, poker rooms were rarely even half full, even during tournaments and the longest I ever had to wait for a seat at a low limit blackjack table was 5 minutes. Craps was somewhat harder to get at, but mostly because most casinos only had one or two tables running with the rest completely shuttered. For the poorer visitor like myself it was actually quite nice, since many casinos responded with lower limits. Heck, even the Bellagio is spreading a $1-2 NLHE game these days. Unfortunately it meant that I never got around to playing Omaha, Stud or Razz for fun since if the game was running it was always at least 5-10.

I made my contribution to keeping Vegas going through restaurants, cab fare and show tickets. My gambling take, which I originally thought was down, turned out to be up $50 after I retallied. Certainly not the $500-$1000 USD I should have been taking home but for a couple of ridiculous sub %5 river cards, but coming home positive is nothing to sneeze at. If you’ve never been to Vegas it’s actually a great time to visit, prices are low, hotel promoters are getting desperate  and show tickets for almost everything are easy to come by at a discount. Everyone should hit Las Vegas once, even if they aren’t a gambler.

Gambling, If I had a Million Dollars, Nostalgia, Poker, Things that are hot, Travel, Vegas

Next Post: A venetian, a roman and a greek walk into a bar…