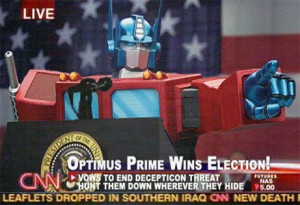 The other day I was at the drugstore trying to choose a birthday card for my team to give to our boss when I noticed a familiar face peeking out from the kids birthday section. The shining silver mouth, the oddly expressive eyes and the almost batman like points of his head were all instantly recognizable. It was Optimus Prime, the world’s greatest father figure and since it was a sound chip card he was “getting a signal to wish me a happy birthday.” Now don’t get me wrong, I have an amazing father. He’s a patient and kind (if slightly odd) man who is a genuine inspiration to me. However; Optimus Prime is a robot.

Let’s go through the reasons for Prime’s supremacy as a father figure.

Robots fit the classic North American strong father figure archetype perfectly. Tall, strong, barrel-chested (truck-chested?) and able to defend his family, when you boasted that “my dad could beat up your dad” as a little kid you’d win pretty much by default.

Growing up, how cool would it have been to pull up at the front door of your elementary school in a giant shining truck that drives itself?

Peter Cullen’s iconic voice inspires the autobots to fight against impossible odds. Could you possibly resist doing your homework or eating your veggies with that voice chiding you gently? What about bedtime stories? I’m sure Fred Savage would have preferred Optimus Prime over Colombo.

There are too many examples to list, indeed at times some would argue that Prime seems to be far too noble. Honestly though, is that even possible in a father?

5. You’d get to see and do things other humans never will

Want to see Cybertron? How about exploring other planets? Wouldn’t a transforming robotic power suit be cool to have? You might even get a career in space. Sure, we all know that once in a while you’ll get kidnapped and put in mortal peril. Don’t be scared… Starscream or Rumble will end up in charge of guarding you and you’ll be able to escape through their sheer incompetence.

6. Never be late for soccer practice

Even if he can’t drive you there himself he can always pull that little wheelie robot out of his trailer and send you off in that. Heck, worst case scenario he can just order Bumblebee to be your bitch like he always was for that Spike Witwicky kid. (Incidentally, how come Sparkplug named his son Spike, but Spike named his kid Daniel… shouldn’t he have gone with Chainsaw or Carburetor or something?)

7. You’ll never have to hire a moving company

Just think, not only can he carry all your stuff off to college or a new job in his trailer but he can transform and hand boxes in through the window of your crummy 5th floor walkup and save you some stairs.

8. He’ll be around for the long haul

Sure all those sad farewells may tug on your heartstrings a bit, but he never seems to die permanently. There are things to be said for a near immortal dad. Eventually you would have seen it happen often enough that you could probably make some decent coin betting on his resurrection.

The coolness of this cannot be overstated…

Is it any wonder that some of us cried when he died in Transformers: The Movie?* We all knew that Ultra Magnus and Hot Rod(imus) were no replacement for this icon of leadership, masculinity and parental excellence. Even watching the abominations created by Michael Bay the presence and dignity of the voice rises above the schlock. I can almost bear slow motion running from explosions and random meaningful stares into sunsets when it’s narrated by Peter Cullen. If only Frank Welker had been involved too…