Is there anything worse than being on a 1-lane highway? Up until now you’ve been cruising down a two lane divided, people are moving at a decent pace. Maybe you’re in a hurry, maybe you’re not, but you’ll get there reasonably close to when you expected. Then you lose a lane…
Instantly, every 5th driver around you turns into a moron and an annoyance. We’ve all been there, and you know any kind of predictability for arrival time goes out the window. This isn’t the biggest issue if you’re heading out just to take a sightseeing drive, but when (like me) you’re trying to catch a ferry it becomes problematic. 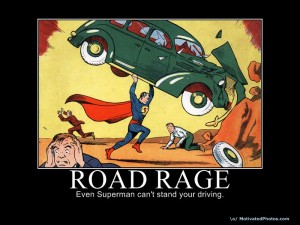 1.    The Sunday Driver: Only drives their car over to town a couple times a week. Doesn’t understand that the car can go faster than 50km/h (31ish mph) despite being in an 80 or 100 zone.

2.    Old Man in a Hat: Similar to the Sunday driver but will often go a bit faster. Unfortunately he brakes for almost anything (including sunshine) and takes forever to get back up to that speed. Also changes lanes at a pace more appropriate to an oil tanker.

3.    Nervous Nellie: Possibly a new driver, but just as likely not, they’re nervous about everything. Likely a city driver that doesn’t often get on the highway. The key symptom on a 1 lane each way undivided is that they flinch every time a car comes the other way.  This often leads to them slowing down, or even more dangerously actively slamming on the brakes anytime an opposite direction car passes. Particularly annoying (and dangerous) at night when their nervousness climbs into panic and no matter how far back you stay you’ll still risk hitting them.

4.    Captain Curvaphobic: Some of the most frustrating people to try to pass, this type is absolutely terrified of even the slightest bend or curve in the road.  The moment the road turns from a straight line he’ll drop his speed by 15-20 km/h. Those of us who like to use our cruise control find them absolutely infuriating. What’s worse is the moment you’re back on a straight section of road where you can actually pass, he’ll accelerate again and make it difficult.

5.    Shepherd and his Sheep: The Shepherd is likely one of the above types who has gathered 5-10 sheep who are too nervous to try to pass him, but are sticking so close together than someone who comes up from behind needs to pass the entire herd at once or becomes part of it and exacerbates the problem. Most of the time periodic passing lanes can break this up, but this part of Ontario doesn’t seem to believe in them.
a.    Likely Driving: Everything under the sun.

6.    Trailer Tom: Usually a pretty similar situation as the shepherd. Often slow because they’re pulling a large trailer with a ridiculously underpowered light SUV or Minivan or even worse a car (enjoy the yearly transmission replacement morons.) The sheep in this case find it harder to pass since the two vehicle train is longer to pass. I’m not as anti-caravan as the Top Gear guys (I quite enjoy camping) but come on, if you’re planning to pull one buy something with the power train that can handle it.

7.    The Explorer: We’ve all seen this guy in town too, usually a tourist trying to find a specific street and slowing/stopping at every intersection trying to read street signs. On this kind of highway he’s the guy who either can’t read a map or simply can’t remember a road number. Everytime you pass a sign indicating an upcoming turnoff or split he’ll be slowing and swerving as he tries to read a map and drive at the same time. In some cases he’ll do this for hours, apparently so bad at reading maps that he can’t even tell that he’s not even in the ballpark of his exit yet. Why people can’t print off a google map or make a quick sequential list of the Highways/Roads/Exits they’ll before I they leave on a trip to an unfamiliar area I’ll never understand.

8.    The Big Heavy Truck: You’re driving down one of these roads and off in the distance is a farmyard or gas station with a soul crushing sight. Waiting to exit: a massive double load tractor trailer. You hope and pray that it’s either turning left, or that the traffic flow is constant enough in front of you to not let it in. Of course it won’t be, and you’ll find yourself slowed to a crawl as this behemoth struggles to make it up to 50 then takes another five minutes to get to 85. God help you if this is a hilly road, because this truck is so full of anvils, tungsten or cows that it has to slip into a crawler gear and put on blinkers to climb. Soon there will be a train of 30 cars behind you, but none of you will be able to pass because a stadium parking lot worth of cars will suddenly be travelling the other way at perfect intervals, except when there’s a double yellow line.

9.    The “I have an expensive car that obviously has cruise control but I’m not using it and driving you to madness”: Maybe it’s just me, but I see these guys all the time.  You’ll be driving down the road at 105km/h or whatever and come up behind one of these guys. Prepping to pass, you’ll suddenly find them pulling away from you, so you re-engage cruise and relax again. Suddenly around the next bend you’ll be up near their bumper again, whatever cell phone call they’re on having distracted them into slowing down. This time you decide, screw it I’ll pass them so I can just stay cruising. No luck, they’ll pass you back a few minutes later.

I don’t understand why it’s so much to ask for me to be able to put on my cruise control and enjoy the drive. If you aren’t comfortable driving on the highway, take a bus… the greyhound network here in Southern Ontario is reasonably good and likely wouldn’t put you into a stress induced early grave. My personal pet peeve though is the last type, mostly because there often seems to be active malice behind their actions as opposed to the just general stupidity of the other offenders. I’m not actively pushing for a death race 200 style combat/point system…or maybe I am? 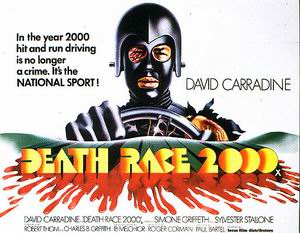 Hmmm, I think we’re on to something here. Now I just need to come up with a terrible nickname, a fun modding/paint scheme for my Mazda3 along with an alluring female navigator for the nude group massage scene.

A man can dream…

p.s. What about the Toaster (main weapon: flamethrower?) painted in chrome and restyled to look like an old school Toaster. Hell we could even put a cylon eye on the front and mix that joke in.

Check out the shirt here

p.p.s. If you haven’t seen the original Death Race 2000 you really should, it’s amazing.