Apologies if the next two updates are rough, both were written while I was in quite a tired state.

Just after posting the last update I heard about the terrible quake in Japan and the subsequent tsunami warnings for NZ. Thankfully anything that got there wasn’t going to be an issue that far up the hills in Auckland so I slept pretty soundly..

The next morning I was joining up with my tour group and heading east into the Coromandel region. Made the fun mistake of almost getting on the wrong adventure tours bus, but eventually I was picked up by the bus heading in the right direction. To Chris and Jodi it turns out I do have your tour guide, great guy though misguided since he says you’re wonderful people.  I’m the only canuck on the tour and the rest are a fairly diverse mix, a couple aussies, several brits, several germans and a scattering of other euros.

We started out with a stop at Mt. Eden, a mostly (hopefully?) quiet volcano that was once home to a Maori fortified village or Pa. Climbing the road at high speed in a tour bus (though the adventure tour ones are tiny nimble ones) turned out to be training for later that day. Once at the top there were great views of Auckland in all directions and a path around the cone. The depths of the cone are a sacred Maori site so people are asked to stay out. We also heard about april 1 1985 where a group of students started a large tire fire then phoned in Volcano tips to local news outlets, causing a 1km radius to be evacuated at 6 in the morning. 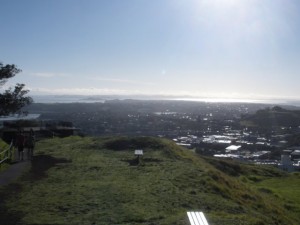 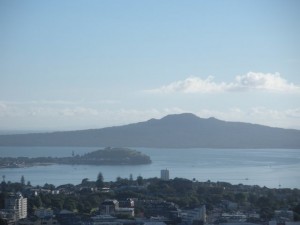 On the way to Coromandel we passed through lots of rolling farmland covered in rich Volcanic soil. Every few kilometres there was a road information sign. Most were now saying, Tidal Surges or Tsunami Warning, stay off beaches. Our tour guide insisted that we’d completely miss the surge since we were supposed to be doing a sunset kayak. We had a quickie food stop where I picked up some delicious pear cider and some lunch. Lunch was by the side of a swimming hole well known by our guide, and nearly got the bus stuck between some trees and the bank. Two stoned old dudes came down not long after and showed us how  to place some bread in the water and lure some freshwater eels, very cool to see. Getting to the coast from there was an intense road, endless switchbacks and blind corners over sudden cliffs. Amazing, but I don’t even our driver. 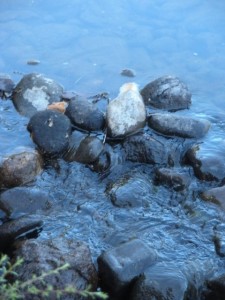 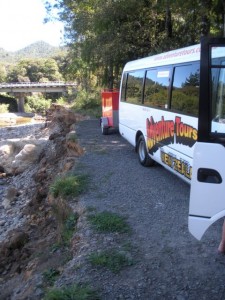 Once we arrived at the town of Hahei, the plan of action for the afternoon was a quick swim, followed by a sea kayak expedition into Cathedral Cove. I’m told the bay we were swimming in was used for some of the shots in Voyage of the Dawntreader, I’ll have to go back and look but I can absolutely believe it. Beautiful blue green water, lots of islands keeping the waves manageable and some great body surfing. Unfortunately the government didn’t feel the same way, and just as we were about to depart on our Kayaks we found out that a warning for further surges was still in force. Despite knowing nothing would happen the operator had to say no and because the walk down the cliff had been washed out in a storm some months previously we didn’t get to see the cove. Sad, but saves me some money for other excursions. (Update: watch was apparently cancelled only 30 mins after had to give up waiting) 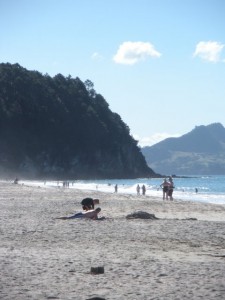 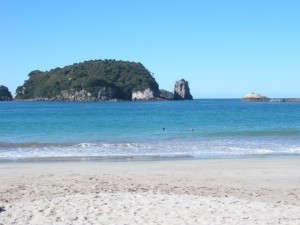 Instead since the tides were better, though behaving wackily we went down to the hot water beach. Another reminder that we’re all clambering around on top of a volcano that wants to kill us during what is clearly a seismically interesting season. Hot water bubbles up through patches of the sand and as your feet sink deeper they begin to burn. It’s a fascinating sensation, and many people dig their own hot tubs in the sand. Again Tsunami time messed things up for us though as the tide could not decide if it was going out or not and we couldn’t really dig tubs. Sinking into bubbling hot sand was still a blast, though if you waited too long you got some tingling feet.

Our meal that night was a giant barbecue prepared by Ali our guide, meat to order, potatoes and veg and ice cream for dessert. Absolutely delicious and served right next to my first really good view of the southern hemisphere stars. In fact the stars were shining so bright that we walked back down and along the beach enjoying the view over the pacific. My first view of the southern cross, great view of visible milky way and a gorgeous moon hanging above the bay to the north.