Good god this was a long day of driving. We started out with an early morning transit to Christchurch, but were nowhere near the damaged areas.  Would have been interesting, but even now the locals are being kept out. Oddly enough we were actually changing drivers again here, and the next driver we`re only getting until Queenstown.  Combined with our changeover to the North Island bus back up to Auckland we`ll have had 5 drivers for our 3 weeks, which seems a little excessive.

The rest of the day was solid driving with periodic sightseeing and bathroom stops. We passed the Castle Rock formations which really reminded me of the climactic battle area in the first Narnia movie. Very pretty, especially after a short walk to the top. Apparently it`s a very popular free climb area.

Arthur`s Pass was next, apparently it`s only relatively recently that this road was finished (late 90s) and good god the original road must have been scary by the looks of the original path. We had lunch at a cafe up there then began to make our way down to the west coast. Once we hit the Tasman Sea coast we were into the region where most of the greenstone(jade) that`s sacred to the Maori comes from. Most of the stores in the town of Hokatika that were selling it actually let you walk in amongst the craftspeople as they worked on the stone. It was definitely neat to hit both coasts in a single day, but our journey wasn`t over yet. 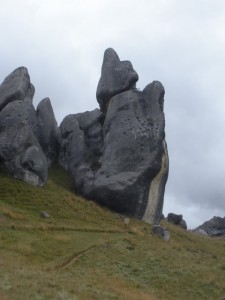 We had to get to the Franz Josef glacier by the end of the day, which given our two hour delay and extra time picking up the new driver in Christchurch meant we didn`t hit the Franz Josef township until almost 6. It took us a while to check in with our glacier guides for tomorrow, then check in at the hostel. This is the first time I`ve had fault with E.T.`s opinion on lodging or food, but his description of this place is nice was certainly pushing it. Since arriving we (the boys) have been given a room directly next to the laundry, just down from the kitchen and at the base of the main stairs. It faces directly onto the main courtyard with full glass doors and 2 busloads full of Contiki types (heavily 18-20 year olds and stupidly heavy drinkers) so we`ll likely get a lovely serenade come closing time. Neither of the bunk beds have ladders to the top, our laundry was contaminated by some weirdass fleece material that may have ruined some of Niall`s shirts and the bathroom has an amazingly loud fan that automatically comes on and stays on long after the light is turned off. Lastly, our included meal tonight had the already late start time of 7:45, and despite our pre-order didn`t arrive on the table until almost 8:30, when we`d all eaten at noon. Sadly we`re staying two nights here, I`m sure it`s nicer if you`re in a single (even being upstairs would be better) or camping in the campground portion, but our room feels hostel-y to the worst. Hopefully the contiki types are moving on tomorrow so we can all get some sleep after our big hike.

Now that dinner is done I`m taking advantage of a free evening with internet that functions (I say this now, but the younguns are probably sponging it all up atm) to hopefully throw up the last 4 or 5 days of blog posts and a few pics. Hope everything is cool with everyone back home. Remember you CAN get me at the usual emails if you need me. 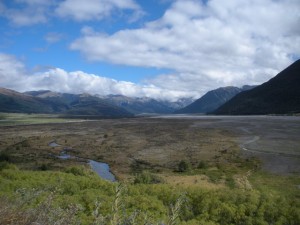 Sure enough, the connection is shitty, it’s taken me an hour just to put up the text blog version. I’m going to very slowly add some photos until my time runs out though.