The following two posts are combined into one because I’m exhausted and running out of internet time.

I sit now in our alternative night stop in lieu of our Christchurch return. It’s a rafting lodge which is probably seeing the most offseason accommodations it ever has. I wish we had time to go rafting but sadly it’s a power-drive back to Wellington tomorrow, then to Auckland the next day. While I sit here I watch the reflection in the window of the doorway as the female half of our German couple checks  for at least the 5th time if her boyfriend is back in the room yet. The place has one hallway and she would have seen him if he’d come in, but no, there she is again lurking in the doorway.

Today started after a surprisingly sound sleep in our Royal Hotel, in my case I suspect simply because it was a solid pillow for once.  After a quick breakfast we’d boarded Princess and headed down to the Central Otago Rail Trail. Formerly a rail line bringing passengers into the area during the gold rush, the rails have been removed and the resulting well graded right of way turned into a massive mountain bike/horse/hiking trail through some gorgeous scenery. This morning we did a 33ish km chunk of it from near Naseby down to Hyde. We had sections passing livestock, little sheep faces and bored looking cows. (Fun fact: New Zealanders have 10 sheep for every 1 of them.)There are also a ton of deer farms in this area and it’s very odd to see a field full of deer placidly looking at the bus heading by instead of running in fright.

Our section of the trail ended at a really nice little cafe overlooking a vast expanse of rolling hills and farms. I’m quickly becoming repetitive with comparing NZ to Canada, but it’s true New Zealand seems to combine most of Canada’s scenery types into a nice compact package. In any case I was very much reminded of the foothills of the Rockies in places along the trail. It’s very much uniquely New Zealand as well though. Nikki and Naama actually got lost in the beginning as we all took off without realizing their bikes were still being adjusted, so by the time they arrived at Hyde we’d all had time to have a lovely lunch/snack, much better than yesterday’s atrocity. 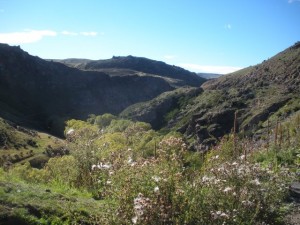 The rest of the day was getting to the Rangitata Gorge rafting lodge via a few stops. We had a brief stop at a very large open pit gold mine, something most of the Europeans hadn’t seen before. Next we headed down to the Pacific coast and visited the Moeraki Boulders. These boulders are very smooth near spherical bubbles of rock that have fallen out of the muddy coast onto the beach and look as if they’ve washed in from sea. They have strange veins of quartz looking material that makes them look very alien to the landscape. Very neat though, and I couldn’t resist getting a few photos. 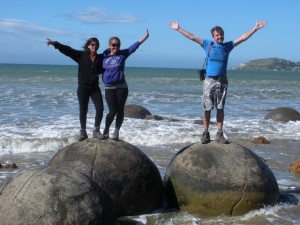 The lodge itself is nice enough, though we got here quite late and can’t really enjoy the scenery (especially with a 6:30AM departure on tap for tomorrow) so it will have to go on the list of places to come back to next trip here. Our rooms tonight have 9 beds but we’re sharing just the boys so it’s only 5 of us. This is a particularly good thing given that three of them are third level triple-decker bunks that have got to be close to 10 feet off the ground. This is our last real night on tour as half of us will be getting off at Christchurch (Andrea and Simone left today to go to Dunedin for a bit rather than sit around in CHCH waiting for their flight with little to do.) We’ll be dropping off five more I think and picking up 8 people who will be starting their south island tour, but we’ll only be sharing the bus with them as far as the ferry in Picton. Here’s Lisa again now, walking in as if it’s her room. I know they’re travelling together but go sit in the common areas together (and you know, talk to people) if you wanted to be together constantly you should have sucked it up and paid for a double upgrade. Of course if it was other people we wouldn’t care as much but frustration with them amongst the whole tour group is pretty high. 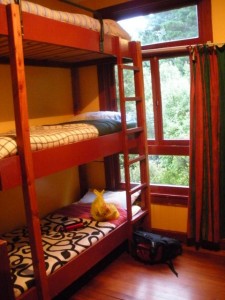 So a couple more days (and believe it or not a FIFTH driver) from now I’ll be heading out from New Zealand. I have to say that as great as this trip has been it’s done nothing more than whet my appetite for another visit. I think coming here with someone and sharing a camper van or something and hitting some of the spots I would have liked to have spent more time in would be great. Things like: More time in and around Auckland. Explore some of the rest of North Island, go back and do the Sea Kayak to Cathedral Cove when there isn’t a Tsunami warning. Do some diving once I’m certified and go snorkelling with the dolphins again (I could honestly do that every day.) It’s a beautiful incredibly welcoming country that has set a pretty high bar for Australia to match the rest of my trip. If I could suggest one thing to anyone coming here, don’t look at NZ all tiny next to Australia and think it deserves a 10th of the time. Everyone I’ve met has agreed that they’d wished they’d spent more time in New Zealand rather than just tagging it on at some tiny portion of a bigger trip. While I’m glad the tour is over (we’re all a little burnt out and need some downtime) I could easily spend more time here.

That said, I loved about 95% of this tour and most of what I didn’t was a result of the driver confusion caused by disorganization at head office about how many drivers were leaving since we’re sort of on the cusp of the end of the season. Our current guy is doing his best, but it’s his first time on Adventure Tours and they’ve given him pretty much zero help. Overall they’re great though, an older more mature crowd that likes to have a good time but isn’t up to 5am every night like Contiki. The groups are smaller. The real drivers are super knowledgeable(and Digger will get there soon if they keep him on here), point you in all the right directions and take you to spots you’d never find on your own or with one of the big buses. It has been a great overview of both islands on this one, but I’d recommend them even if you only have time for one island.

Sad day today as we sped from Rangitata to Picton. Along the way we made a couple stops in Christchurch dropping off roughly half of our remaining number. As I write this we’re sitting on the Picton to Wellington ferry which will arrive in the capital at around 9:30pm, making our time since leaving this morning roughly 15 hours… ouch. To make things worse, departure time tomorrow morning is 6:45am. Despite the length of the day we saw some nice sights and managed to persevere.

I felt bad as we all got up this morning for the 6:30AM departure. There were several other people staying in the lodge, but with the creaky old floors and 13 of us moving about grabbing showers and loading bags there was no way to stay quiet. I’m sure they’re bitching about the annoying tour group ruining their stay but we did the best we could. Low hanging fog over the narrow access road made the drive out a bit of an adventure as well as we ran across a fair amount of wildlife including a doe who was probably a farm escapee.

This time through Christchurch we got a much better view of some of the damage and would apparently have been within sight of the toppled cathedral tower in the city center. It reminded me a lot of photos from New Orleans. Obviously the scale of the damage is nowhere near as bad, but there is that same view of buildings with spraypaint codes denoting type of damage or just a simple NOGO. Old stone buildings were the hardest hit we saw (for the obvious reason) including a number of churches. One of them was obviously a beautiful old chapel in red brick, but most of the buttresses had given way and all the formerly stained glass arches were ragged holes. Many Victorian homes had obviously taken a long of damage as well. Some were missing walls, some had seen a collapsing porch draw off the entire front of the building. The nature of the earthquake means that damage in some areas appears kind of random, with newer buildings being condemned, but older places that look as if they’d fall down at the drop of a hat are open for business. There’s a definite hush about the city. The population has been diving since the quake and it shows. We passed a number of completely abandoned apartment and condo blocks, “For Sale” or “Not Reopening” signs were in many business windows and the traffic was nonexistent during rush hour. We passed the hospital visible in so many of the news stories and the number of cars parked everywhere nearby just sunk your heart. Temporary parking had clearly been set up in nearby areas and all of it was packed. At the same time, not far from the stricken city center there were people walking dogs and playing golf in the park, waving to passersby. 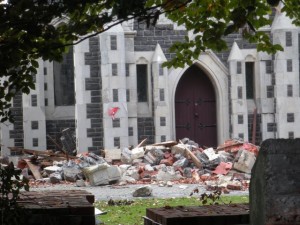 Leaving Christchurch we retraced the road we’d taken south from Kaikoura two weeks back. We didn’t see any dolphins from the road (our guide told us he’d seen orcas on one trip) but we did visit a colony of very cute seals. Even better, not far up the road there was a short walking path along a stream that the seal pups play in heading up to a waterfall. We were a bit disappointed to not find any seals in the pool, but on the way back down some happy barking alerted us to four juveniles playfighting in the stream. They’d found a small pool and were bouncing around in it. I really hope my video of it turns out well.

Since we had no way of making the 2PM ferry but the 6PM ferry didn’t require any kind of a rush we made a few stops like that, rounding up with another winery visit. This one was a much tastier one and even had a canuck behind the counter offering the tasting. They’re a fairly new winery and are striving to be zero carbon emission and the smallest ecological footprint possible. They’re also the largest single block vineyard in the southern hemisphere. I picked up a bottle that I’ll try to finish before Australia, otherwise it’ll be sealed up and I’ll hope for the best with it in my backpack.

In any case, it’s time to brave the on board food selection since we’ll be arriving too late for much to be open but it was too early to eat at the last food stop before the boat. Edit: food surprisingly ok, checked into hostel at 9:30PM sharp…

And thus ends the March portion of the travel blog, check my facebook page for some photo dumps  (I’m starting to get caught up) or check back here once I have cheap internet and I’ll post some once I’ve really tweaked them. Sydney beckons, then on up the gold coast. Only real firm thing on the agenda is visiting David from this tour in Brisbane and getting my PADI certification at some point.

Cheers for all the notes and things, I miss everyone.