I think at this point I’m going to give up on the day numbering since without an adventure tours brochure to check I’ll quickly forget (plus I already screwed it up anyway I believe.)

My last night in Auckland was rather bizarre. After a long long long drive from Wellington to Auckland, David and I checked into the YHA City but unfortunately we couldn’t get a room together. Despite only getting a 6-share (I wasn’t entirely sure I’d stay there but also wasn’t sure I’d be able to cancel in time so I went cheap as possible) I found myself upgraded again, this time to a real double. David ended up in a quad up nice and high. Niall was staying out in a hotel at the airport as he was leaving uber early and wanted a nice sleep for the limited hours he had, but for the meantime he left his bag in David’s room. I didn’t meet my roommate, but he had left pants neatly pressed and hanging as well as a lot of other tidy stuff so I joked with David that he must be German. (Kidding, I’ve met lots of nice normal German folks on this trip too)

We headed out to try to find a drink or two before we met the remaining ladies of the tour at a pub for dinner. The guys had spent more time with Auckland nightlife than I had, though given one of my two nights was me recovering from jetlag that doesn’t take much. We first went to a bar that had a rooftop garden patio that was really nice, but sadly reserved for a private function, so we left after a quick beer in the indoor portion. Walking uphill half a block we came across a few picnic tables in a narrow semi-alley filled with businesses. It was somewhat of an odd setup, the downhill curve of the alley meaning those tables must have had their legs precision cut to fit and stay where they were. In addition customers of both the pub we drank at and the little Korean noodle place next door seemed to use them. Eventually after eavesdropping I learned that the tables nominally belonged to the pub but that there was some sort of arrangement between the two businesses (I’m guessing they share the cost but they’re in the pub’s name because they’re licensed.) Makes sense for the pub, though they serve food there were also a fair number of people coming by for a noodle bowl, sitting at the tables then getting a beer when the waitress came by.

Dinner was in a pub that most of the AT gang had visited their night in Auckland before I joined the tour. Unfortunately it was fairly busy due to a trivia night so we ended up in the basement, but it was still a fun night of reminiscing and good natured grumbling over certain incidents. Things ended early though, after so long on the road and an early start we were all kind of ragged. Niall especially needed to get to bed since he wanted to be at the airport for 4ish in the morning.

I went back to my room to find that my roomie had been back but was not currently there. I was actually pretty thankful as the two plug outlet for the room was situated right over his bed in the middle of the wall (whoever did the wiring for that place is a moron.) Sadly, just as my laptop and ds had been charging for about 4 minutes in walked my roommate wearing nothing but a towel. He turned out to be not German, but a 75ish year old Brit who immediately announced that he was getting up at 4am. I told him that was fine and he was good to turn out the light when he was ready (I was going to write on my laptop and play some peggle or something) but inwardly I was groaning, having wanted a solid uninterrupted night’s sleep on the (at least moderately) comfortable beds at the place. Things got even better when about 30 minutes later after he’d dozed off and was snoring he started muttering then almost shouting unintelligible nonsense. Super fun, though he was at least back to mere muttering by the time I tried to sleep an hour or so later.

I’ll give the old guy credit though, he very quickly packed and left after his alarm went off and but for the ridiculously loud slamming doors of the Auckland YHA City I’d have only really been awakened for a few minutes. All too soon after that it was time for me to get up and make my way to the airport. Thankfully the airport bus that I’d bought a round trip for on my arrival had a pickup spot just as close as the dropoff had been. Sadly it was down the el-steepo street from the pictures and with my heavy bag and day bag my knee was seriously pissed off at me by the time I was at the bus stop. I said my goodbyes to Auckland as we headed south to the airport, but I know I’ll be back.

It was a little strange to have to do customs both exiting the country and upon arriving in Australia, but the staff in NZ were actual human about things (the woman serving me was very cute too which helps) and the post-customs security people were also friendly and very efficient. Though I had no idea there was an airport of the year award, it doesn’t surprise me that Auckland has won it. The absolute kicker though was the apparently brand new safety video from Air New Zealand as seen below, keep an eye out for everyone’s favourite kiwi Amazing Race host as well.

Air New Zealand has taken over from old style British Airways as the best airline experience of my life. Obviously the destinations you can take them to from Canada are somewhat limited, but honestly, if it’s just another $50 to take them vs. United or whatnot you should absolutely take the plunge. Genuinely friendly service with a sense of humour, great in flight food and entertainment and (from my experience anyway) comfortable planes. Kind of like golden era WestJet but offering a full package service. Update at the end of the trip to see if they’ve kept that up on my subsequent two flights of course.

Sydney’s coast was rocking as we landed so I wasn’t surprised that my first impression on exiting the airport to central train was wind. On my friend David from the NZ trip’s recommendation I’d booked into the Sydney Railway Square YHA hostel which is conveniently right next to the station I’d gotten off at. It’s actually built into part of the old mail yard where parcels were once loaded into mail cars to take across the continent or down to ships heading out to the rest of the empire. Some of the hostel rooms are even in old train carriages, though I’m in the main building. It’s quite nice and almost brand new, though suffers from some of the usual WTF design decisions of hostels over here such as not enough wall plugs.  Absolute kudos to them for the heavy doors to the main hall that still close semi quietly, sadly our window that we really HAVE to keep open opens onto the platform for the railcar rooms so it’s kind of wasted.

After settling in and answering a few emails I went around and explored the local neighbourhood a bit before flopping into bed and just watching some videos. I’d been tired to begin with and I’d completely forgotten that I’d gone back 2 hours so I fought to stay up longer than I really should  have. My roommates were a young Japanese kid who’d arrived when I did more or less, an older guy who I think was in town for a wedding judging by the nice suit he had hanging in his locker and a third guy who didn’t show up until late and who I didn’t hear come in. He unfortunately made up for this by having a cellphone go off at full volume at about 4am, jackass. After that I couldn’t really get to sleep again fully as I kept waking up imagining that we’d overslept and were keeping the bus waiting. My brain is bizarre.

Today I continued my program of resting my quite possibly significantly damaged knee by walking around 18-20 kilometers down into the oldest part of Sydney, across the harbour bridge and around Kirribilli, then back and around the Opera House, into the botanical gardens etc…etc… I really am quite clever sometimes :p . Coming back to the hostel later on I’m fairly sure I looked like I had a prosthetic. Still, a ton of beautiful buildings, views of the harbour and opera house shots despite it being a cloudy, windy day. On the way back to the hostel I also picked up some groceries as now that the tour is over I have zero provided meals and I can’t afford to cafe it every day, especially in Sydney. 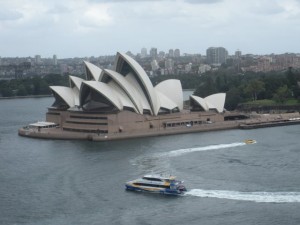 Walking around The Rocks was kind of neat, it’s an area that was the first rough and tumble ale and whores type district of the city and which has never really completely shed that rep apparently. According to the wiki page it’s partly gentrified, but still has a lot of low income residents in government housing and nighttime issues in some parts, somewhat amazing given the location and what the real estate must be worth. The side facing the Opera House and the Harbour Bridge is very gentrified with a ton of restaurants and shops as well as a museum and some boutique hotels. One would imagine this process will continue. Since it was Saturday there was actually a market on as well, so I picked up a cheap and delicious wrap from one of the vendors and found a great view of the Opera House to sit down and eat.

While walking about the Opera House, gardens and parks I seemed to run into “Everyone gets married in Sydney” day. No less than 10 couples taking photos, one actual wedding overlooking the harbour and a strange french couple recording video interviews with other tourists about how much people around the world are excited for their friend’s wedding back in Paris. While walking down to the waterfront earlier I’d heard a ton of church bells, I’m guessing most of these weddings probably occured nearby and I was seeing the aftermath. It was kind of funny to wonder how many wedding photos I’ll be in the back of though. 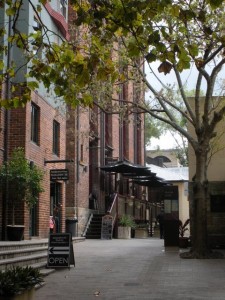 Once I returned with my groceries and pain I ended up spending this evening curled up in the lounge with my Australia travel guide, talking with people on occasion but mostly planning for future stuff and catching up on laundry. The exciting world of laundry on a Saturday night, is it any wonder I’m single. Most of the bars around here seem very clubbing/dancy though, and most of you know that it takes a loaded gun to get me to one of those in the first place, so going on my own is just not going to happen.

Tomorrow I’m planning to either hit Manly Beach or do some museums and markets depending on the weather. I still haven’t decided how long to spend in Sydney since I need to remember I’ll be here at the end of my trip too to catch my flight. If anyone who’s been here has any recommendations please shoot me an email or comment. 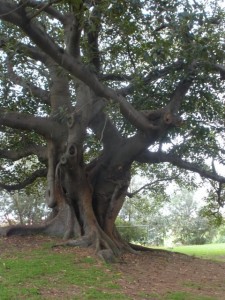