Still here on the Gold Coast with David though I expect I’ll be leaving soon. Because of the fact that Easter is so late this year it coincides with ANZAC day in Australia (their remembrance day for the Australia New Zealand Army Corps) and gives them a 5 day long weekend this week. Combined with both Queensland and New South Wales schools being on holiday this week it has made for busy times and I expect difficulties in booking my next step if I leave before Sunday. Thankfully David is being a fantastic host and hasn’t kicked my butt out yet.

In fact, he’s been showing me an excellent time. Thursday seemed like a good beach day as the sun seemed to be out and strong to start the day and the vast hordes were still working until the next day. David took me down the coast from main beach along the various sections of beaches and neighbourhoods we’d seen the previous day from the top of Q1. Every view was gorgeous, green blue seas rolling onto wide sandy beaches. The wave action wasn’t the best I’d seen down here, yet every beach had at least a few surfers challenging the curls. We stopped at a Surf Life Saving Club at Elephant Rock to check out the view and have a drink and some wedges (of course with sour cream and thai sweet chilli.) What a fantastic view… we sat and watched a few surfers catching the waves off the rocks and enjoyed the sun. 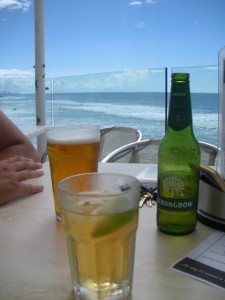 Further south we reached the border between QLD and NSW again, this time at Captain Cook’s Point Danger. Despite it only being Thursday several of the beaches were very busy, at least by David’s standards. Of course, unlike grand beach here you need to swim between the patrol flags (or at least somewhere reasonably close to them) on most of the beaches lest you encounter rips and other unpleasant things. We ended up finding a comfy spot on Greenmount beach where we could look back across the long bay and see the high rises of Surfers Paradise rising in the distance. By this point the temps had gotten pretty high and we were both dying for a swim so it didn’t take us long to plant our towels and hop into the waves. They weren’t great body surfing waves sadly but it was still a magnificent place to swim on a beautiful day. When we went back to the apartment to have a shower afterwards we were absolutely wrecked from playing in the waves for almost two hours. David ended up having a nap and I laid semi conscious in bed watching a show for a bit.

Due to the fact that it was school holidays we’d reluctantly concluded that the theme parks would be too nuts to really have much fun at, but David made the suggestion that we check out the Australian Outback Spectacular. This was a wild west type dinner show presenting the outback cattle station lifestyle both in the past and now. It was a blast. I’d read a fair bit about the production in advance but I was still blown away by how many animals they use. Tons of different horses, cattle, sheep and their herding dogs and even a demonstration of a helicopter mustering all in an indoor arena surrounded by dinner theatre seating. Included in the show (and very timely given ANZAC day on Monday) was a tribute to the Australian Light Horse regiments of the first World War, troops that were mostly outback volunteers. All the audience is divided into two teams and given appropriately coloured straw cowboy hats, of course they were out of anything larger than a medium hat so both David and I looked ridiculous trying to wear ours, but me more so. You actually get to keep the hats as well and they aren’t terrible so it’s a shame they were out of large or x-large. The show itself was incredibly well done, all the riders and animals were fantastic performers. The whole thing is a well oiled machine with the food brought to you piping hot during short intervals in the show (usually a song.) Several hundred people end up served within about 3 minutes while the drink staff bring around wine, beer or lemonade refills. The food itself was good as well, a salad with mango dressing wrapped in a tortilla, a quite tasty steak and trimmings and finally a proper Aussie pavlova for dessert with berries. The show ends with some audience participation moments but thankfully neither of us was chosen (David had done it in the past and faceplanted in the sand so he said no) and these determined which station was the winner. We lost thanks to some blatant cheating. All in all a great experience, still a little mystified as to why they sell light up lightsabers for kids though… surely a glowing cowboy hat or something would be better?

After the show we were about to pull back into the garage when David had another idea and took us back down the waterfront to the jetty we’d walked to my first day here. Here they’d implemented a very neat idea so that when we got to the end of the jetty in the dark we saw a ghostly looking scuba diver surfacing in the gloom. As he dove again we next saw a prehistoric looking creature swimming up out of the depths near the diver. Positioned above the pier are a number of powerful data projectors on swivel mounts that create a number of these images in the water. We saw the swimming dino looking things, the diver, eels and a turtle. Very neat idea. Not far from the pier there was a public installation along a path of what David called boopy things. Poles mounted with coloured LED bars that interact with passersby in sound and light. Fun to play with, but I couldn’t help but wonder how long they’d last in a park back home.

For Good Friday we decided to stay away from the beaches and go for another hike up in the hills. Judging by the traffic this was a good idea because even trying to get out of here we ended up doing about a 1 hour loop getting on the motorway then back off basically back where we started. We ended up going back through town and out another exit and back up into the hills the same way as before. Because most of these parks are built around outflow valleys from an ancient volcano they’re at the end of long roads that don’t connect to anything else because the ridges themselves are usually too rugged to build roads over. From looking at a map you can see that parts of where we went today are actually only a few kilometres from where we were in Springbrook but we’d have to do an hour’s drive down windy roads to go out and back in. This time we were hitting the Binna Burra section of Lamington National Park. The road wound up into the hills and then on to a wide ridge plateau with epic views of volcanic valleys on either side and the gold coast in the distance.

When we arrived at the info center David had a quick chat with the ranger and we decided to do the caves walk, a reasonably quick 5k with a lot of up and down. He warned us that the last 2km up the hill before the road was quite muddy and sure enough, soon after we got on the trail a family doing the walk in reverse came by with the kids quite covered in mud. Why you’d do the trail in reverse I don’t know as it leaves you with a long walk uphill on the road to finish instead of down it. It didn’t take long on the walk to get to the titular caves which were volcanic remnants thought in some cases to be Aboriginal weather shelters. It wasn’t until a bit after these caves and rock formations that the trail got quite muddy and we seemed to cross the same stream several times as we began winding our way back up the mountain. My most exciting moment came when I noticed something on the path and stopped dead as David nearly collided with me. As I pointed it out to David, the snake I noticed reared up and began making some disturbingly cobra-like poses with the front of its body while we meekly backed up a bit. Neither of us knew what type of snake it was so we politely waited for it to finish crossing the path. Thinking it had curled up under a rock we gave it some space only to discover that it was just beside the rock and kept having issues climbing the slippery muddy hill and reared back again as I passed. I like snakes and I’m certainly not terrified of them, but I knew there were potentially deadly ones in Queensland and both of us were very much more on the lookout as we clambered through the mud for the rest of the trail. Once we got up to the ranger hut again we showed David’s blurry photo (he camouflaged well) of Mr. Snake and were eventually hesitantly told what it was. It turned out the ranger was wrong as I later found the right species in a guide book at the lodge, venomous but rarely bites humans. 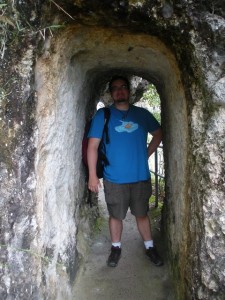 Not long after we encountered Jake the snake on the trail we began to see the true muddy bit of the trail. By picking our way carefully we managed to avoid the six inch deep portions, but it was still very slip and slide and you’d often plant your foot into something that felt like glue. We ran into several other groups coming the other way including a group of about 5 wearing the least appropriate footwear you can imagine. One guy wearing flipflops another wearing sports sandals (slightly better) and a woman wearing white slip-on shoes more appropriate to a lawn party I didn’t see what the other two were wearing but likely equally inappropriate. We warned them that the mud went on quite a while but they kept going. We heard the women yelping and could easily imagine the mud sucking their shoes off and leaving them barefoot to their ankles. We managed to avoid any leeches but saw a few people in the parking lot with blood streaming, I imagine that group discovered a few.

Annoyingly enough Australia seems to enjoy a tradition of restaurants (and perhaps other businesses?) imposing surcharges on public holidays. I’ve seen this number be up to 30%. We went up to the lodge at the end of the track but not only did they have a surcharge, they weren’t even serving food at 3pm. The only other eatery at the top was closed for the holiday, so we went back to the car, ate a few of our snacks and headed back to town stopping on the way for a slurpee (more yankee style than Winnipeg, but still refreshing.)  Lunch/Dinner ended up being a lazy visit to Dominos and a pretty laid back night occasionally watching the giant bats fluttering outside.

Saturday will be time to do a bit of shopping and plan my next stop before David gets sick of me, I’m hoping to head up to Fraser Island and do some sand riding and dingo visiting.

Antipodean Adventure, Watch out for SNAKES!