Vienna is much better than I thought it would be. Several travellers had warned me that it was a little boring and maybe it is if you want to be out clubbing until 5am but I found it really pleasant. Thankfully the u-bahn (subway) was still running when my train arrived so I was able to get across the city to the hostel rather quickly. It was clearly not in the classiest neighbourhood judging by the occasional “woman of negotiable affection” on the path to the hostel. I must say that I’d have been turning around and likely finding a different place to stay had that been an American city because by the time I’d reached the hostel I’d walked down two very long deserted and dark streets with no sign I was going the right way. Once I arrived and checked in there was a very spacious room with a large window that kept things reasonably cool. Several of my roomies had also just arrived and the hostel had a small on site bar so we headed down and enjoyed some happy hour vodkas before calling it a night.

The next day was unfortunately Monday which is the day that many museums typically close. Thankfully I still had several good choices and since it was reasonably near to the hostel I decided to start by walking to Schonnbrunn Palace, the summer home of the Hapsburgs. The palace itself is quite large but it’s completely dwarfed by the grounds and have a very Versailles air about them. The line to get in was substantial but at least moved quickly though judging by the much shorter queue when I exited I chose the worst possible time to get there. The palace apartments were quite gorgeous with many of them having incredibly intricate panelling that boggled the mind. One (sadly mostly under restoration) had beautiful rosewood inlaid with middle-eastern etchings. Most of the rooms have been restored and displayed as they were last used either under the Franz-Joseph and his wife or the earlier Maria-Theresia. 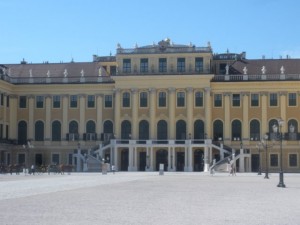 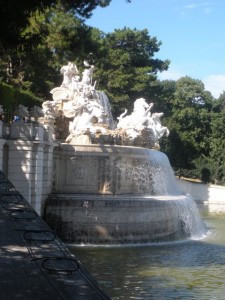 After my tour I walked around the grounds a bit, inspecting the massive fountain that dominates the view from the palace before heading slowly through the tree lined avenues to the u-bahn station. Conveniently enough most of the museums in Wien are centered around one subway stop. As previously mentioned a few of them are closed, but I wanted to see some of the Klimt paintings and I figured an Austrian focus wouldn’t hurt so I visited the Leopold Museum. It seems somewhat out of place as a modern ugly concrete block in the midst of all these beautiful old buildings, but what was inside certainly made up for it. I spent several hours touring the place but came away having appreciated the Klimt but also really enjoying the works of Egon Schiele who I hadn’t really been familiar with previously. 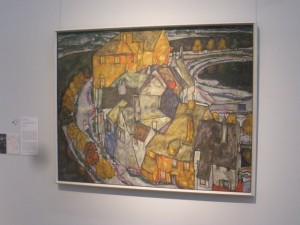 As I kept walking around the beautiful museum and former palace buildings in the old city center I was mostly happy that it was a more pleasant temperature (right around 30) so it was at least possible to walk around all day without feeling like you needed a shower after merely stepping outside. I even managed to wander into a public wine and food festival in one of the squares and helped myself to some apple strudel and a pretzel. The wine looked to be of the sweet German variety so I passed on it. I probably walked around for another 2 hours before heading back to the hostel to do laundry. Typical hostel laundry with very little idea of how long it would take or how well it would be done but I desperately needed to get some of the ripest of the shirts clean before they achieved sentience and took over my bag completely.

Once laundry time was done I had a gloriously laid back evening as I headed back down to the old town and enjoyed an authentic (and enormous) Wienerschnitzel, several mugs of good beer and later some open air Mozart by an orchestra. Sadly I forgot my camera after changing shorts for the laundry, but it was a good closing to my time in the city.

I’m currently sitting on a train to Munich and watching some beautiful scenery roll by the windows. Austrian trains continue to be the best of the trip in my mind. I have a difficult decision to make as I’m running low on time to do everything I still want to do. The question is mostly if I’ll stay a full day in Munich in hopes of going to one of my favourite castles or simply stay the night then go on to Interlaken in Switzerland. Both would be beautiful, but doing both means either heavily curtailing or dropping one Italian destination. It will likely come down to what has the best train layout since I don’t really want to waste a full day on the train again this trip.

Once in Munich I made up my mind and decided to stay for a full day and go to Neuschwanstein Castle (sometimes known as Mad Ludwig’s Castle.) With that finally settled and my research done I set out in search of Munich Beer Halls. On the recommendation of a few friends I sought out Hoffbrauhaus Munich one of the oldest and biggest, sat down and ordered a Ma? of beer (1 Litre of deliciousness.) This went down disturbingly quickly and I was enjoying the traditional band and the surroundings so I ordered another, some munich sausages and pretzels with sweet spicy mustard. I have to say it was pretty much my stereotypical German experience. A bit later, and actually mildly tipsy (strong stuff and that was the first time I’d eaten that day so it was taking a while for the food to catch up and soak up the beer) I set out to explore the English Garden which is a giant park not too far from the city center. 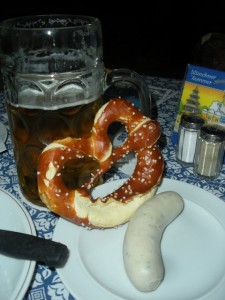 I managed to arrive at the park right at the site of the surfing wave an outwash from the pump that feeds the park stream that creates an artificial wave surfed nearly constantly by people. A little ridiculous, but fun to watch for a few minutes before exploring the rest of the park. Of course, exploring is hard work and when I stumbled across another biergarten I felt compelled to have another litre of beer. I spent most of the rest of the night strolling random streets, but decided to call it a reasonably early night since beating the crowds out the castle would require an earlyish train. Unfortunately my hostel room faces the courtyard and so does the bar, so I didn’t really fully get to sleep until 2ish anyway. 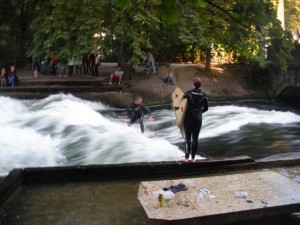 It’s about a 2 hour train ride out to the castle site followed by a short bus trip then a variety of ways to climb up from the castle. Annoyingly I’d forgotten to charge my ebook reader and I finished my one paperback halfway into the outbound journey but the scenery was gorgeous anyway. Munich gave way to rolling countryside backlit by a brilliant azure sky that basically made the whole thing look like a windows xp desktop. Every picturesque little town we passed through had lots of flowers and cows and at least a few alpine looking homes and cottages.

Once at the castle I picked up a ticket on which they give you an assigned tour time. There are two castles there but since I was locked into public transport I just went for the more picturesque Neuscwanstein. Since my tour was an hour and a half or so away I decided to do the 45 minute walk up the mountain to the castle rather than paying for the horse drawn carriage or bus. Absolutely worth it, almost from the moment you leave the cluster of cafes and hotels at the bottom you have amazing views down into the farming valley below. Ludwig certainly knew how to choose his views, unfortunately his fiscal policies were another matter and before the castle interior was finished he was removed from power by a secret government vote. By declaring him insane they managed to get away with it, though having him commit “suicide” in a waist deep lake not long after (and conveniently getting rid of the psychologist who diagnosed him as well) he wasn’t able to fight back.

The rooms that are finished in the castle are gorgeous, pretty much each one is a tribute to one of Wagner’s operas as Ludwig was a friend and patron (and obsessed superfan) of the composer. The famous scenes of Tristan und Iseult decorate the living room, with an artificial grotto nearby. The king’s bedroom in particular is amazing where apparently 3 master woodcarvers spent 4 years alone. Yet as beautiful as the exterior is, it’s the overall look of the castle and the location that continue to inspire. It was the inspiration for Disney’s Sleeping Beauty’s castle and many others in movies and television. As much as I do love it, it still takes second place to the Chateau de Chenonceau in my personal prettiest castles list.  I spent the rest of my time there doing a few of the shorter little hikes from the castle summit and enjoying the sight of about 10 people base jumping from a nearby peak and over the castle. 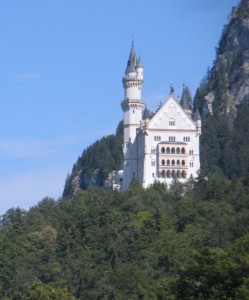 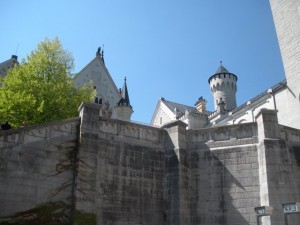 Once back in Munich I took advantage of my unlimited u-bahn and s-bahn train pass and did a mini tour around some neighbourhoods I  hadn’t seen before heading off to a restaurant recommended in my guidebook and seconded by someone I met in Vienna with the same book. It specializes in Bavarian cuisine, especially dumplings and pork. I had farm cheese dumplings which turned out to be about 1/3 pork and 2/3 cheese and melt in your mouth delicious. Needless to say this was accompanied by beer. I’m a little zonked from all the hiking now though so here I sit updating the blog and enjoying a bit of music. Thus far I have the room to myself tonight so hopefully it isn’t packed and there isn’t an hour long wait for the shower tomorrow. Italy beckons tomorrow! 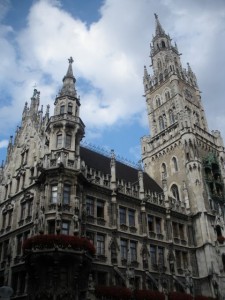 P.S. Super fun moment on the way back as I ran into a most amusing banner at a yay jesus rally… (Yes I know it means jesus loves you in german, but I giggled) 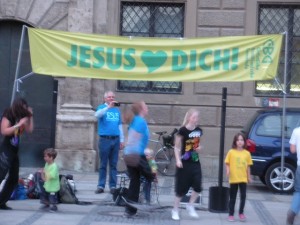 Next Post: European Adventure: HOW MUCH IS A BIG MAC???