Venice was a delightful city made a lot less wonderful by the terrible digs. The hostel had six showers per floor and each floor was made up of five or six 16 bed dorms. I had the extra fun of being in the top bunk by the door so I heard every single movement of the door as people arrived back at random points during the night. The lack of showers was made worse by the fact that one or more of the shower curtains seemed to disappear randomly. They were also located in coed bathrooms which didn’t thrill many people and didn’t have hot water once while I was there. As someone who doesn’t function particularly well without a morning shower it was a fairly major problem.

The city thankfully made up for it as I headed out the next morning. I started out by taking advantage of the fact that I’d given up on sleeping and gotten up and out of the hostel by 8 and thus had a lack of cruise ship groups and walked around most of the city again. People were up and around, but as it was Sunday morning as well things were fairly laid back. Once it got a bit later I headed back to St. Mark’s and took the museum tour which included access to the balcony overlooking the square. It was quite fascinating to look through the various displays about the various building periods of the basilica and the art that has been added and subtracted over time. The tour includes a few glimpses into the interior of the church and the famous mosaics so thankfully I didn’t really feel the need to come back after mass to see it again. 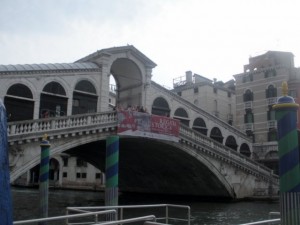 I spent most of the rest of the day exploring the outer islands in the lagoon, particularly Murano the famous home of the glass blowing industry. There was a fantastic variety of different workshops and a few of them even had live demonstrations. I’ve always been interested in glassblowing and seeing how quickly the experts can tool out 3 or 4 beautiful pieces of work in a row with deft moves. The island itself is very Venice looking but feels very much quieter despite the number of tourists still walking around. I stayed longer than I’d planned in fact after finding a beautiful little trattoria with a treed courtyard and fantastic pasta.

The following day was another early start that turned out to be for naught when the train I wanted to take was full. It ended up taking an extra 90 minutes with a third  change to get to my next destination. That said, the Cinque Terre region on the Ligurian coast was totally worth it. I ended up staying in the tamest of the towns which honestly wasn’t a bad thing given how I was feeling after Venice. Almost the moment I got in the door I was enjoying a long and gloriously hot shower, finally feeling clean after 3 days. I went out for some food after and talked to my roommates a bit but was pretty much out of it early. The hostel was beyond bizarre though as in addition to a 1-3pm lockout for “cleaning” they also required you to be out of the bedroom by 10 so it could be cleaned. Since it was a place with 2 8-bed dorms and 3 double rooms for couples  you had to wonder what exactly it was they were spending so much time on. We were really unimpressed when a cleaning woman came into our room while we were sleeping and stripped the beds of the people who had left early while shouting in Italian to the woman at the front desk. This wasn’t the only instance of staff rudeness either, but the place was clean, cool and quiet so it made me happy overall. 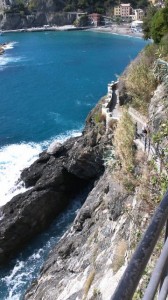 The next morning was time to do the famous hiking. The region is primarily  made up of 5 towns along a beautiful stretch of coast each nestled amongst vineyards and olive/lime groves. The paths between the towns that were originally used for harvest time are now incredibly popular hiking trails. I hear they’re beyond busy in high summer but things were calm enough now you were able to walk them only letting people pass every five minutes or so. Unfortunately one of the paths was shut off completely due to a landslide, but I still got to walk the prettiest parts when the time came. It turned out to be a gorgeous day for it as well but hot enough that reaching the end and being able to hop into the sea was the best reward of all (not that it kept me from grabbing some gelato afterwards.) Unfortunately as I was trying to get on the train to head to the other end of the 5 towns and do  one of the shorter parts of the hike not affected by the landslide I found out that it was a major strike day for Italian transport workers. This has been going on all summer and resulted in 80% of the trains being cancelled so when I looked at things I realized I risked being stranded for the night if I did any more hiking so I went back to Corniglia, grabbed a pizza and walked up to watch the sunset. Truth be told I was pretty wrecked between the hiking and swimming so it wasn’t a bad thing. 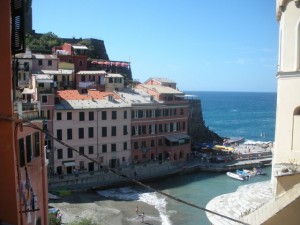 Previous Post: European Adventure: HOW MUCH IS A BIG MAC???