The next morning I set off for the train station, hoping desperately that the strike was done as promised. Since Corniglia is at the top of a coastal hill (as you could see in the photos on facebook) this meant either a trip on the shuttle bus or a long walk down steps. Unfortunately I managed to be ready to leave the hostel in the one window where the shuttlebus didn’t run for 2 hours (it made little sense, it came up after almost every arriving train, but somehow didn’t go down on any sort of regular basis.) So the stairs it was! My guidebook says there are 382 of them which I believe as they go down the hill in a tight zigzag from near the peak down to essentially sea level where the tracks are. This was interesting with all 50 odd pounds of backpack on my back (my carryon stuffed inside as well to make things easier.) Once I arrived at the station I found that the Strike had ended, but that one of the midmorning trains was out of operation due to maintenance so I’d be waiting for 90 mins for the next one. Predictably when it arrived it was packed as well since the 5T tourists who don’t hike use it to explore the towns. While crammed into the vestibule with a few other backpackers I eventually made it out to La Spezia and onto a quick change for a train to Pisa.

Pisa is an odd town, though it was supplanted long ago for supremacy in Tuscany by Florence and other cities it still draws many tourists, mostly because of the tower. I’d been told by my guidebook, some friends and multiple people on my journey that it wasn’t really worth a full day as it was easily done as a stopover on many routes. I quickly discovered they were right as any route out of Cinque Terre (and all but one of the routes to 5T from Venice) took me straight through it. A three hour stopover was enough time for a quick walking tour of the town, a look at the tower and duomo and a bite for lunch. I’ll be honest, I wasn’t really expecting much. The leaning tower really seems like one of those tourist things that you show up to and think “is that it?” I was wrong, it really is worth seeing. You’re mind is kind of boggled that the thing is standing and it really is pretty with the church in behind as well. Of course to see it I had to look past 30 or 40 odd groups of people setting up the “LOOK, I’m holding up the tower” photo. I won’t deny I probably would have done some sort of goofy pic had I had a companion with me but it does somewhat take away from the scene to have a bunch of people squatting around awkwardly posing as if they’re forcing out a particular difficult bowel movement with their hands in the air. Other than the tower though I was not particularly impressed by Pisa, particularly with the aggressiveness of the street vendors and the lack of any really authentic seeming restaurants anywhere in the downtown area. 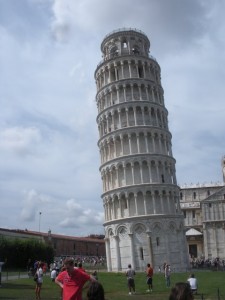 Hopping back on the train it wasn’t long before I was in Florence, which in Italian is the much more interesting to say Firenze. Home of the Medici, birthplace of the renaissance and giant art storehouse, it was immediately much more to my taste. Just walking to my hostel I passed several cathedrals (including the epic Duomo,) multiple museums and enough beautiful architecture to keep me staring upward for a week. My hostel turned out to be perched on the 3rd floor of a gorgeous old building directly between Il Duomo and the Accademia where Michelangelo’s David is displayed and all of a 2 minute walk from either. Unfortunately I had reached the laundry crisis point again and if I didn’t find somewhere to do my clothes I’d be wearing fairly heavy polo shirt in hot humid temps the next day. As seems to be usual this turned into more of an adventure than it should have been. The laundry was nearby, near empty and very clean but it wasn’t until my load finished that I realized the machine hadn’t used water. Trying again in a different machine brought the same result and I was left 7 euro poorer with a machine full of stank clothes that had just been spun around a lot. Luckily as the second load was finishing a woman came in and tried a machine, got the same result and had a cellphone to call the manager. After a bit of a rigmarole things were put right but it had still taken enough time that I had to ditch trying to see David from my plans for that day. Instead I did an architecture and market tour, grabbed dinner at a restaurant recommended by the hostel guy (Spinach and Ricotta Ravioli in a black truffle cream sauce that was simply incredible for all of $10 cdn) and had a gelato while watching the carousel in one of the piazzas. 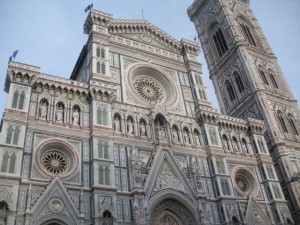 The next morning I got up reasonably early, sobbed at another lukewarm no pressure shower and got in line for the Accademia. By getting there soon after it opened I managed to beat most of the cruise ship groups. It’s actually quite a small museum but it really makes up for it in quality. Every piece of marble in there seems to be a masterpiece and Michelangelo’s David itself is breathtaking. Photos really do not do it justice. The size, the detail and the capture of the pose are just amazing. It has been installed in a gallery with several unfinished Michelangelo works to really reinforce that it was carved out of a solid chunk of marble. Of course, on the way out I saw some Americans buying a pair of boxer shorts modelled after David’s nether regions.  Classy!

The Uffizi gallery was unfortunately a bit of a letdown of an experience. I was well aware that I’d be waiting a while since I wasn’t going to pay the extra for a reservation but I wasn’t expecting them to only let the line move once every thirty minutes or so. The non-reserved line waits for the reserved line to be mostly empty, for any cruise ship or tour bus groups, passing clouds and the return of Halley’s Comet before moving.  Honestly it feels like they’re trying to drive you into paying the reservation fee for the next day or buying onto one of the guided tours with a third party company at 3x the price. I’m not cheap, but when you’re planning to see somewhere around 8 museums in the next 4 days at minimum $15 cdn a pop you kind of want to save where you can. I waited about 2:15, apparently it can be more like 4 hours at the height of summer… I’d probably give in in that case. Once you get to the ticket desk they bark at you for exact change (which I didn’t have) but the guy refused to let me just pay with a 20 until I scoured my pockets and found a 1euro coin so he could give me a tenner in change. Way to save time there bub. The rudeness continues upstairs where you are shushed in the most patronizing manner possible if speak, even by non-museum tour guides (who shout at the top of their lungs unless they’re with a group with the whisper things.) Being by myself I wasn’t talking but if I’d been shushed by a non-museum employee I certainly would have told her where to stick it. Museum wise I wasn’t too impressed by the layout either, perhaps Stephanie will correct me but it seemed really archaic and badly lit. (Yes I realize it’s been a gallery longer than Canada’s been a country, but you can change things to some extent.) Many canvasses suffered from massive glare problems no matter where you stood and often made worse by badly installed glass protection, several rooms had very popular pieces converging in one corner to form a massive crush of people. On top of this, the exterior corridor had beautiful statues and busts, but the traffic flow design seemed to try and force you to miss large chunks of them. If you aren’t careful the exit also funnels you out before you see the last few rooms and the signage makes no note of this. That said, they have some beautiful pieces. I finally got to see several Bronzino pieces in person, admired Botticelli’s The Birth of Venus and between the statues outside and the works inside managed to see art by all four Ninja Turtles. 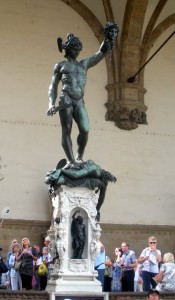 Once back outside I explored more of Firenze that I’d missed the night before including the Ponte Vecchio or Old Bridge which is covered by jewellery shops and is the only bridge not destroyed by the Nazis in their retreat. Interesting but uber touristy and it quickly sent me back to the middle of the old town to admire the Duomo exterior again. I know it’s not original to the church (it was added in the 1800s) but it really is gorgeous. Sadly I didn’t have time to go into the interior as it wasn’t too long before closing and the line was still miles, but Florence is already on my cities to return to list so it can wait for next time. By the time I got back to the hostel was kind of wiped so the rest of the evening was fairly laid back as I planned out my time in Rome. I’m writing this sitting on the high speed train between the two cities and enjoying some free chocolate cookies (<3 first class) and fanta. 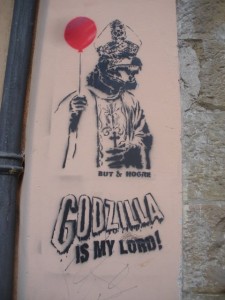