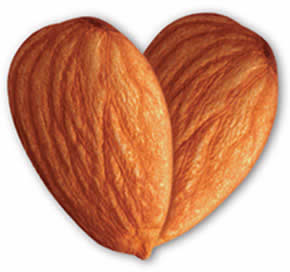 I think everyone has treats from their childhood that evoke special memories. Maybe it’s your mother’s chocolate chip cookie recipe bringing back memories of winter mornings or blueberry pancakes making you think of camping trips in the woods. One of mine has always been Frangipane. My grandmother would often buy a delicious frangipane tart made by the since closed Belgian bakery on Corydon here in Winnipeg. Something about that buttery crust, thin layer of raspberry jam and thick layer of almond filling just rocked my world as a kid. It didn’t hurt that I often got it when I was either off or home sick from school and had to stay with my granny while Mom was at work. Just the thought of those tastes takes me back to being curled up under a blanket in the recliner watching pbs or cartoons.

It’s one of the first sweet things from my childhood that I remember distinctly. The first thing I remember loving that wasn’t your standard overfrosted birthday cake. I think at this point I’d only ever had basic roasted almonds and this was my introduction to just how delicate and delicious they can be. It would eventually blossom into a full-blown love of almonds to the point where one of the best gifts anyone can give me is a tin of the smokehouse almonds.

My grandmother passed away a several years ago now, but this has been a year of honouring her memory for me. I finally visited England properly, toured some of the locations where she or her family lived and met some friends who missed her dearly. As Christmas rolled around and I tried to think of something to make for dessert the Granny theme came back again and inspired me to finally make  my own version of that delicious cake.

For those who have never had frangipane it’s essentially a firm spongey texture with a hint of custard flavour and a delicious nutty flavour. My research choosing a recipe led me to the discovery that it can actually be made with many nuts including hazelnuts (more fiddly but probably yum) and pistachios ($$$) but there was no question I’d be going the almond route. This led to other problems. As with anything there were oodles of different recipes all over the net, complicated by the fact that various regions of the low countries and France seem to change the recipe a ton. The crusts varied wildly, many of the frangipane recipes seemed to go into full on custard and several seemed overly complicated for what should be a reasonably simple tart. In the end I decided to find my top five recipes based on:

1. Crust: I didn’t want to do a puff pastry or choux base like many of them suggested. I wanted a shortbread/pate sablé crust that would be firm and flaky but melt in your mouth delicious. This eliminated a ton of the french entries.

2. Frangipane: Firm and nutty with a slight oven toasted crunch on top is what I wanted, nothing too eggy or too custardy since some people aren’t fans. I wanted rich almondy density without making it too heavy to eat.

3. Topping: I wanted to do a nice visual apple layout for the top. Some of the recipes called for berries or halved pears or other things that made the fruit the main ingredient. I wanted the fruit to merely enhance the background awesomeness of the almonds.

I never did find a recipe that fully met my requirements so I actually ended up combining several to make my ideal tart. The crust I ended up adapting from my tried and true shortbread crust recipe. The frangipane was an online one that I sadly lost before I could note the url (I think it was from a peach frangipane tart) and for the apples I just decided to wing it.

End result? A tasty dessert that was enjoyed by all. Flavour pretty much perfect in my mind, but next time I may go for a smaller diameter pan and a taller frangipane layer to make it more like the childhood version. I really like it as is, even ever so slightly warmed, but it would also be nice with a dollop of ice cream. After a wonderful turkey dinner and lovely dessert that brought back memories of my grandmother I felt like a good Christmas had been accomplished. 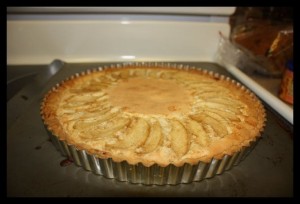 Note: full photo version of this recipe is available at: GOONSWITHSPOONS.com

It really is a wonderfully simple recipe. The pastry is near foolproof and really only gets better the more you practice it. It doesn’t need to be made in advance and only really requires a brief interval that you can use to make your frangipane etc. The important thing to remember with any shortbread type recipe is that you want to keep your handling of the dough to the absolute minimum. Overhandling the dough will make dough tougher and give your final product a tougher, less buttery/melty texture. 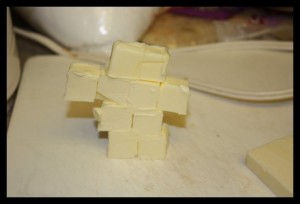 *Process your flour and salt with a pulse in the food processor. Add the icing sugar and pulse again a few times.

*add 1 cup of your butter and pulse it until the butter is well chopped.

*slowly pulse in your egg yolk into the dough starts to bind (don’t overdo it, see above)

*if it’s still not binding add a bit more butter and pulse.

*Melt a bit of your extra butter and using a pastry brush coat your tart pant nicely but not too thickly.

*Press the crust into the pan using the minimum of hand work necessary (don’t compress it too firmly.)

*Cover the crust with foil and bake at 375F for around 30 minutes. Keep a close eye after 20 minutes or so and don’t let it get more than golden on the crust (you’ll be baking it more later)

*Lower your oven to 350F for the next step 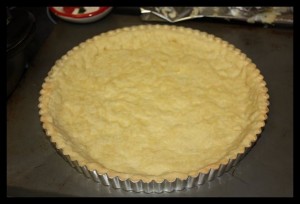 *Hopefully you’ve washed your food processor like a good chef and have it ready. Cream your butter and sugar together.

*Pulse in the almonds then add the cornstarch, then flour.

*Add the eggs and get everything creamy smooth before you add the booze and vanilla.

*Spread the crust with a layer of the raspberry jam (optional)

*Brown your butter in a good saucepan then mix in some brown sugar, the cinnamon etc…

*Coat and gently cook your apples in batches then place them aside. I was in a bit of a rush on this one and didn’t let as much butter drip off as a I should have. Oops.

*Arrange your apples around the edge of your tart, or cover the whole surface as your tastes dictate. Note that you should press the wider edge of your apple down into the frangipane to make sure they don’t sink after baking (like mine did a bit)

===Bake it:===
*Throw it back in the oven at 350F until the frangipane is firm and golden brown

*As you can see my apples were still a bit too wet and as a result bled a bit into the frangipane. Lesson learned for next time.

==Serving:==
*Excellent alone or with a dollop of ice cream
*Image below wasn’t the best but I forgot my camera for christmas day 🙁 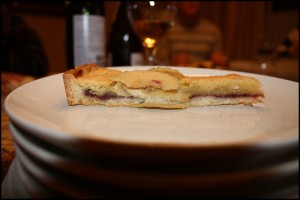