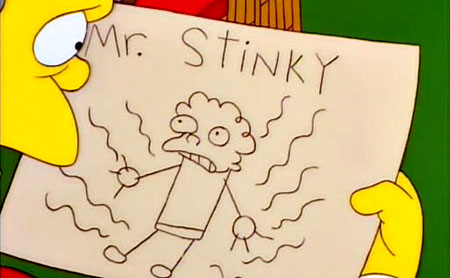 “Aw, jeez. And you got the stink lines and everything.”

We’ve all had a stinky co-worker in our workplace. Usually it’s a guy, usually it’s a lack of showering issue and usually it’s persistent. Not always though. I’ve had stinky female co-workers and I’ve had co-workers of both sexes who over use terrible scented products (be it AXE or Perfume.) Everyone has an occasional stinky day, most people aren’t going to fault you if you overslept, missed your shower and your deodorant is losing the battle come 2:30. Unfortunately there’s also the true stench goblin, the person who has so little understanding of how much they reek that eventually there has to be a truly awkward conversation about soap and water.

In my high school and early university retail days I’d run into a number of smelly people, particularly when I worked at Superstore. We had the usual couple guys on a large staff who simply didn’t get that showering on a regular basis was necessary. There were also other special cases, for example: the poor bastards who worked at the fish counter who would clear out the staff room whenever they came in for their lunch break smelling of mackerel. Even worse were the days where the produce guys were chucking a giant basket of rotted tomato or cabbage and the juices would saturate their aprons completely. Given that I usually worked Saturdays we usually had a platoon of hungover or still drunk/high employees arriving straight from whatever car seat or couch they’d slept on as well, usually emanating a cloud that you could put a match to. Lord knows I don’t blame them, I hardly found the dank world of late 90’s superstore worth any massive effort in the personal hygiene department. Hell I always felt the need to scrub myself down in the bathtub after every shift to get the stench of desperation and broken dreams off my skin.

Even other places weren’t much better. Early days at University brought the occasional walk past the old computer science student’s lounge and the stench that it expelled. CS is a hell of a lot less nerdy and insular these days but in those days 95% of students in the department didn’t dare set foot in their own lounge. It was a dreary little warren nestled in the bowels of the science section. If you ventured within you would find a selection of trolls engaged in semester long tournaments of Magic the Gathering, Goldeneye and Warcraft II as well as a never-ending Warhammer or D&D campaign. If the stench of the rarely unoccupied furniture wasn’t enough to make your eyes water then you had the citizens themselves. If I had to guess I’d say the room probably averaged a daily shower only if you spread it out across all of the regular residents. I’m just glad that back then were were close to the (only by comparison) less disgusting general science lounge.

This is all lengthy preamble to say that I’ve smelled some disgusting people in my time. I’ve done work in hospitals and care homes for the old and disabled. I’ve been to music festivals and terrible hippie coffee bars. I spent a week at a scout jamboree where the rain was so bad that the portapotties overflowed, hell, I’ve visited a sugar beet processing plant. Nothing, not even driving into Brady Landfill on a hot, humid day compares to one of the night janitors in my building.This man’s stench should have its own area code.

Your brain shuts down and all you can smell for an hour after escaping is stale sweat, tobacco and hatred.

It’s like something out of a John Carpenter film. The scent creeps up on you. At first you say to yourself, “that can’t possibly be B.O.” but you slowly begin to realize that it’s truly one human being producing that odour. Your smell receptors scream for mercy, your entire body struggles not to breathe but the cloud is simply too large to cross without inhaling and the last thing you want to do is gasp for air. Finally you give in and take as small a sip of air as you can but it’s too late. Your brain shuts down and all you can smell for an hour after escaping is stale sweat, tobacco and hatred.

You may think I exaggerate but let me step you through just how bad it is. Our building seems to have a severe air pressure differential from outside. The front doors face directly into our elevators and cold air regularly rides up to the upper floors and getting into the elevators in inside clothes is sometimes unbearable in the dead of winter. As far as I can tell this man only works nights as I see him when I stay at work late to go straight to an event. It begins when I walk to the elevator, thankful to finally be leaving the office. I get in the elevator and my nose twitches. It’s not until the door closes and the entombment is complete that I realize I should have taken the stares. His stench has ridden up 6 floors and is surrounding me, yet our creaking elevator will take so long to get to the ground floor that I simply can’t just wait to breathe.  Small breaths, I try not to use my nose but it’s so pervasive that I can’t help but smell. Then the doors open at the main level. I can’t help but expect to see some sort of green haze as if a video game monster has used a poison attack. Nope. There’s simply one man, usually at the far end of the vast atrium but with his odour so pungent it’s as if I was buried in his armpit. Because it’s late I can’t just dash out the close door but instead have to head across the entire atrium to the back of the building. Nor can I run because he’s freshly polished the floors and I’d no doubt fall, smash my head and be faced with the prospect of mouth to mouth. The security guard usually ensconced in the corner is nowhere to be seen, no doubt doing extra outdoor rounds until the janitor moves to another floor (I’ve seen them do 4 laps of the perimeter rather than go inside, even in weather touching minus 40 celsius.) I eventually escape but it really is the truth, I keep tasting that smell in the back of my mouth for a while afterwards. Thankfully when I stay late I’m usually heading someplace with a bar and I can wash away the horror with a few pulls at a beer. The question always lingers… how does this man not get sent to the basement showers by his supervisor when he shows up smelling like that? Our union really is too powerful.

In the end I’m repeatedly struck by one simple fact: This man is in some way responsible for cleanliness and hygiene in my building. The thought is truly horrifying.