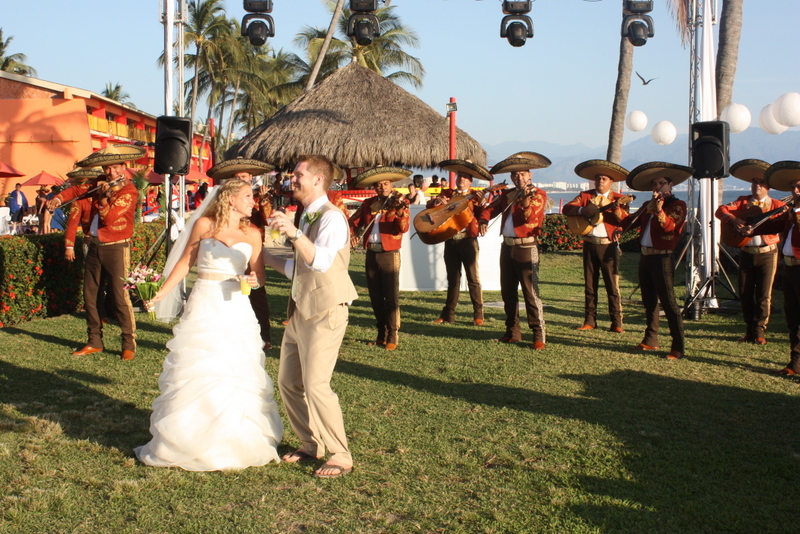 I’m honestly not sure I’m ever going to get married. The fact that a seeming requirement to find me attractive is a diagnosed mental illness doesn’t bode well for the chances of it. I can’t pretend I’ve even thought about the concept of my own personal wedding much. On those occasions when I have, and when I’ve thought about a destination wedding, I think I’ve always assumed it would be small. My parents, her parents, a couple close friends for each of us and done. Ceremony on the beach, nice dinner and drinks, bing, bang, boom. Party at home to follow. Our bride and groom in this case took it up a few levels. I think the final number of guests was somewhere in the 75 person range from all across Canada. In the end the wedding group was big enough that there were usually multiple sub parties going on at all times over the course of the trip. 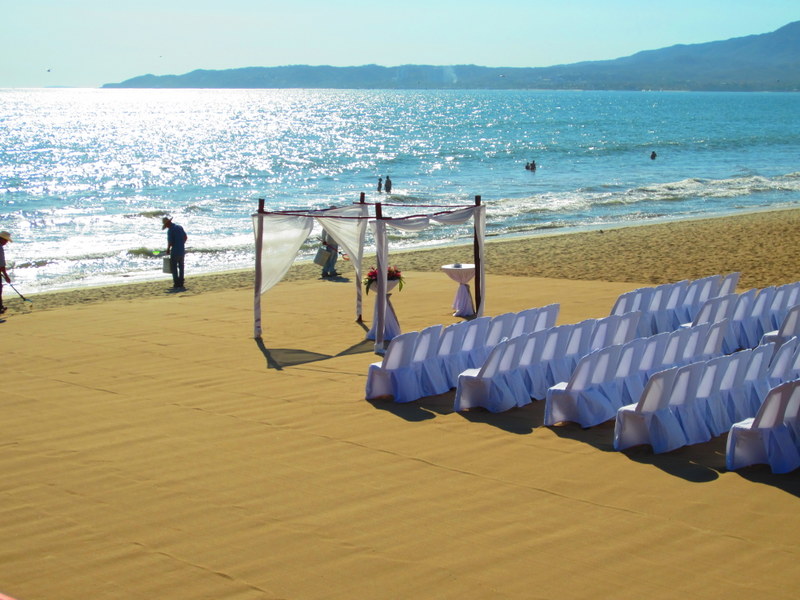 The wedding itself was performed with the waves rolling in in the background. The hotel had done a lovely job setting things up, though their carefully smoothed sand left us all reluctant to mar the perfection until we saw the bride coming. Rather adorably we were given hand fans with the names of the wedding party. Given how hot it was this little touch was rather appreciated, especially by the few people who had actually worn pants. After a fairly short bilingual ceremony we were all swarmed with waiters bearing cerveza and picture time began. 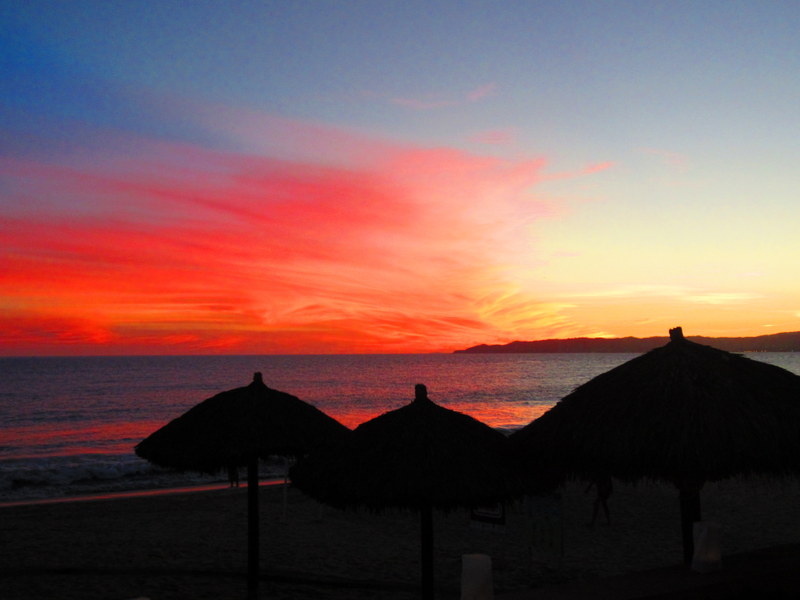 The sun set spectacularly that night as we ate and drank. The usual speeches and chitchat followed and the dancing began. In the end we had a number of other guests trying to crash the wedding to get in on the dancing and an outside dance floor eventually began near the nearby pool bar.  In the end the main party shut down fairly early (it wasn’t far from the rooms of course) but most of the younger crowd continued on in the resort’s little disco/sports bar. I stuck it out for a while but as the team started to dwindle as a day of heat and booze took their toll I headed to bed.

Bucerias is an interesting little town. Like most of the PV region it’s pretty reliant on tourists but being a bit outside of PV proper it’s also not quite as unendingly commercial. At least on our end of town there were far fewer mega resorts and instead a few smaller hotels and large number of condo buildings, many of which had owners renting them out for stays. I suspect if I head back there for a two week stay at some point that’s probably a route I would consider. A cab over to the Mega Commercial (Supermarket) and food for a week or two would be pretty cheap (not to mention it would give me a chance to cook a bit more with local ingredients.) It wasn’t until the day after the wedding that I really headed into the town proper to look around. 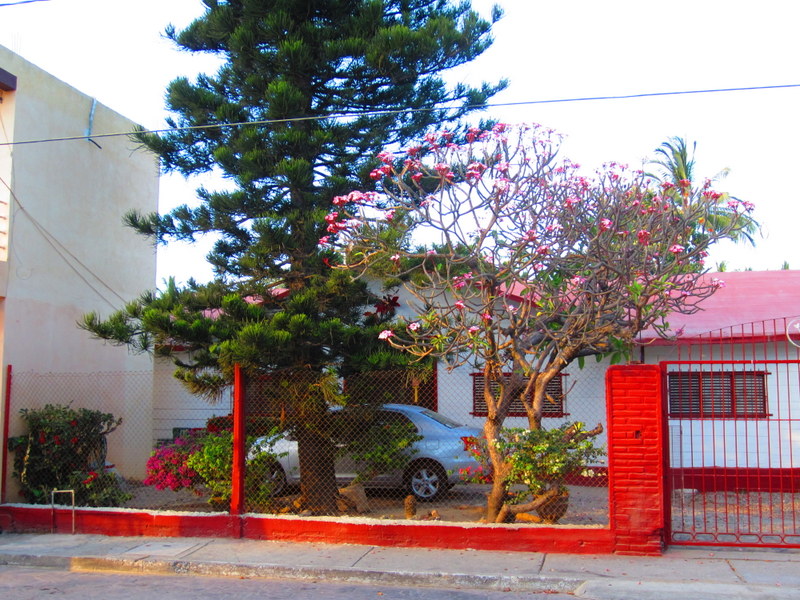 To us poor refugees from this endless Winnipeg winter everything was so green. Even though it was technically the dry season things were still in bloom everywhere. Most of the homes had a courtyard of some kind and many of them had trees or cacti flowering in bright colours.

As with any Mexican resort area there is an arts and crafts market. It’s an experience if you’ve never been to one. The market in Bucerias is simply a number of streets lined with what are basically open air concrete garage stalls. Roughly three quarters of these sell the exact same items as the stalls on either side. Generic wooden or stone animal carvings, bracelets, sombreros, stereotypical Mexican wall hangings and pottery abound. More hilarious are the various sports team trademark ripoffs. You can pick up a beach blanket, poncho, hand-painted bowl or even a luchador mask in your team’s colours, usually with a logo that at least somewhat resembles the team in question.  Chances are you will see pretty much all of these items while sitting on the beach as well as most of them are clearly mass manufactured in workshops elsewhere in town.

More interesting are the scattered stalls and stores that offer higher end goods. Most common of these are the silver shops. While they vary wildly in quality there are truly some beautiful items at a good price if you look carefully. Usually found on the fringes of the market areas (PV and Bucerias no exception) are the actual artist galleries. Here you’ll find actual local arts and crafts. I checked out a few in Bucerias and while I saw some things I loved they were way way out of my price range. Unfortunately there didn’t seem to be anything small hanging out in the ~$100cdn sort of price range that was my upper limit on this trip (I need to save my money to actually have a house to hang some of my existing art in.)

If you have trouble saying no you will be surrounded by vendors in no time, be it in the market or while laying on the beach. The vendors are almost uniformly polite after you say no, some with more of a sense of humour than others about it. English is spoken in some manner by most of them and you’ll no doubt hear a few jokes about how “Senor, my name is ‘no, gracias’ ” during your stay. Sitting on the beach a pair of sunglasses or a book are your best friend as even a smidgen of eye contact will have numerous other products pulled out to be looked at. I did appreciate that a few of the beach areas we stayed on required a license to actually sell on the beach which I suspect curtails a few of the more aggressive tendencies of some. Still it’s depressing for me to see a 9 year old girl or boy out selling gum or bracelets on what is clearly a school day.

If you are interested in buying anything it can be a bit of an ordeal. Unfortunately for those that hate the process you absolutely MUST haggle more or less everywhere in Mexico (higher end stores and restaurants excepted.) My mother despises haggling and always freezes up when confronted with a price demand, combine this with her lack of quick math skills and I’m usually left bailing her out. It’s a sliding scale as well. Whereas on most of the beach vendors/stall merchants you should likely start somewhere around a quarter of what they’re asking the slightly higher shops tend to be asking closer to what a fair price is. If you see 50 of a particular product around don’t be afraid to totally lowball. If in the market play vendors against each other. You’re going to see that product again, don’t be afraid to walk away if he’s not matching your price, he may run down the street with it for you. One thing I noted is to ask what it is in different currencies. Often asking what it was in USD or CAD would flop the prices around a bit and I’d be able to get a deal. If you’re travelling with friends and everyone wants a sarong or something find a vendor with a good selection and make a group buy for a much better deal. This worked well with vanilla on our recent trip. I believe they ended up getting four or five bottles for the initial price ask for one.  In end, be willing to walk away and show patience and you’ll be fine. I ended up really only buying a cribbage board on this trip for myself but brokered a few deals for family and friends even though I don’t consider myself a very good haggler. 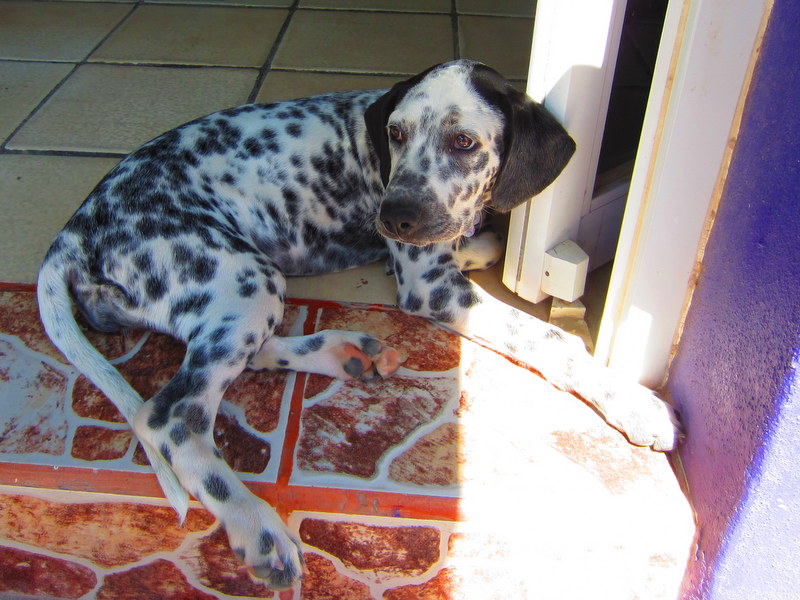 Near the market district in Bucerias there was a very special treat that my parents discovered. It was a local confectionary selling a variety of sweets and treats particular to the area and to mexico in general. If you’re heading there it was just off Calle Lazaro Cardenas about two blocks up from the market bridge (from google maps ave. Jose Maria Morelos, on the beach side of the road) My dad seemed to love the place coming back and between purchases of candy and a delicious pomegranate tequila from him and at least a dozen people he sent there I’m sure he made this guy’s week.  The moment we entered the store he started throwing tiny samples of pretty much all his stock at you. “Oh you like chiles? Well you must try this… and this… and this…” and claimed that three shots of his pomegranate tequila would have you speaking Spanish like a local. I brought back a few different candies, some stuffed guava and a candied chile coated pineapple that was simply mindblowing. I actually ended up back there the next day to buy another package. Seriously, this place is a must visit if you’re there.

Previous Post: Of course, enforcing the rules would help too.

Next Post: This is the rhythm of the night…