My past few trips have definitely instilled in me a deep thankfulness for my lack of susceptibility to seasickness. I don’t want to tempt fate by claiming imperviousness but between several sailing trips, a few larger boats in very rough waters and the truly epicly sickmaking journey back in from the great barrier reef it seems as if it takes a fair bit to make me motion sick (at least when I’m not simultaneously heat stroked.) I definitely feel pity for those who feel ill even on the most gentle of crossings as we saw on our way to Rhythms of the Night.

Yet even before hopping the boat for our excursion I got a little thrill. Vallarta Adventures has meet the dolphins adventures on offer. While the marine conservationist in me doesn’t enjoy the fact that these dolphins are in fairly tight captivity and I likely wouldn’t have felt comfortable paying money to do the ‘adventure’ being there at closing time for most of the other tours meant we could sit there and watch as they were fed and played as the day wound down. (Note: I do think aquariums and sea world type attraction when done well are a good thing as a visit to one helps instil a knowledge and understanding of the ocean world in people young and old. I just think if you can’t do it right, don’t do it. That whole area is a discussion for another day though.) Since we had a while til our boat left I sat there and took far too many photos. 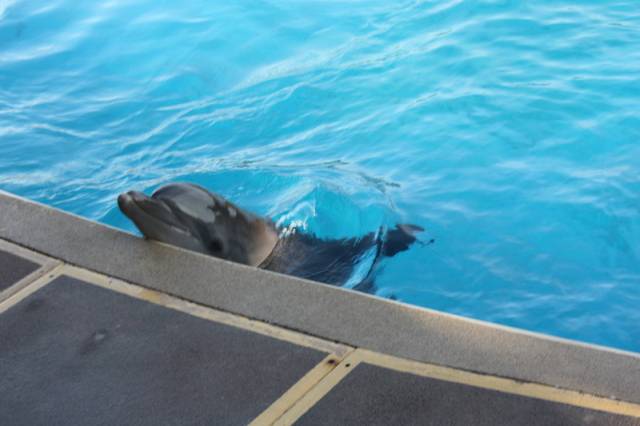 Rhythms of the Night is a package tour put on by the biggest tour company of the area that has converted a secluded beach cove formerly owned by Hollywood director John Huston into a private retreat of sorts for their tour groups. It’s apparently only accessible by boat and that’s why we found ourselves on a cruise across Bahia de Banderas as dusk fell. Other than a few minutes as we cleared the harbour the cruise was remarkably gentle yet several of the 40 odd people on our boat were feeding the fish for most of the first half of the cruise. It must have been terrible… not to mention that spending 100+ usd on a package that includes open bar and great food then spending the first half hour spewing kind of sucks. On top of that the boat ride itself had some quite delicious apps and an open bar.

The end of the cruise at Las Calletas is somewhat magical even to a cynic like me. It’s quite dark by the time you arrive and various spotlights below the water  illuminate the massive schools of various fish that live near shore.* I would honestly quite like to snorkel there and I believe that actually is an option during the daytime. The shore itself is lit by nothing but candles and torches and you are taken along a winding path past various performers towards the amphitheatre. It’s all a little bit Disney yet still remarkably effective, especially in the darkness punctuated by the flickering light. Once you arrive at show you are settled in to watch the show.

In the words of the tour company Rhythms is a “hypnotic and exhilarating spectacle, stories of an ancient civilization are told through live music and modern dance as one of Mexico’s most innovative contemporary dance troupes transports you on a magical and mystical journey through time. “ Elsewhere in the brochure they try to insinuate equal status with a Cirque du Soleil show. I wouldn’t go that far but the performers were all very very talented and I quite enjoyed the spectacle. It was a mix of song, dance, acrobatics and visual storytelling that easily outclassed anything I’d seen in a vacation resort setting before (not counting Vegas of course.) I particularly enjoyed the acrobat clad in an iguana costume that slowly snuck through the audience and shocked some southern woman so totally that she shrieked like a howler monkey.

Rhythms of the Night

My one complaint? The seating. Judging from the firmness the floor was concrete covered in a thin layer of sand and mounted in it were narrow, hard, backless benches. The benches  (at least in our row) were so high off the ground that even my 6’7” father could not lay his feet completely flat and the seating portion was not deep enough for anyone without the ass of a 13 year old. By the end of the show my back was complaining heartily.

By the time the show was complete and we were pointed towards our meal it was absolutely pitch black beyond the torches. We were a group of 7 and ended up at a table mounted right on the edge of the bay (Pro-tip: go with a larger group and you get seated first, and thus drinks first) The table was a tiny bit fear inducing as literally right behind my backless seat was a 20 foot drop straight into the crashing waves. It was not a place to get tipsy drunk. The view was gorgeous though. To our left and right were twinkles candles marking the various other tables stretched out across probably 5 different dining areas. Everything was spaced so as to keep things romantic and or private for the various tables. The underwater lights sent a faint teal glow around the area and as a backdrop for it all were the twinkling lights of the PV skyline in the distance.

Service was excellent for the most part and the buffet style food was delicious. Everything had great flavour and the dishes were varied and well spiced. I even got to visit what is probably the most romantic public restroom I’ve ever been in… a small adobe hut up in the hills lit by at least 20 tea lights and reached by a rainforest path. Our boat captain/guide had made a point of telling us not to rush but pretty much the moment our group finished their first coffee our beach had emptied of people. Though we weren’t told that we needed to head back until the bell/horn rang we started heading back to the dock regardless and it went off soon after. Given that we’d been one of the first groups seated and had hardly dawdled over our food it made the boat captain’s ‘don’t rush, finish your meal and walk around to enjoy the atmosphere a bit’ ring rather shallow. 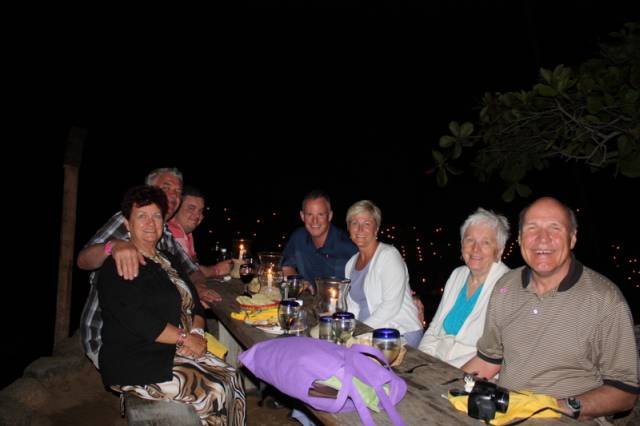 Notice the yawning blackness behind us…

Luckily the gravol slipped to the sea sick folks appeared to have done the trick, the crew pulled out blankets for those who needed them against the cooler night breeze and we began our cruise back. A very sing-y atmosphere provided by much drunker middle aged folks. The crew even turned off most of the decklights for a bit to let everyone get a better appreciation. Probably the neatest thing though was around the lights off point as well as our boat slid into an enormous school of fish. Something small of very bright silver (they picked up the moonlight beautifully through the water) like a sardine or smelt.  It was a constant stream of tightly packed fish all heading in the same direction for as far as you could see. The sheer number of fish visible at one time was mindboggling and yet we travelled through it for at least 10 minutes. I can’t begin to fathom just how many individual fish we saw.

Overall the experience was completely worth it, but I would have searched for a better deal had I been the one booking it. You can get tickets at about 20% off if you really try. Consider taking a small cushion for your behind.

*Note that there are clearly two seatings. While we watched the show first there was clearly a second equally large group that had eaten pre show and left for the docks before we were escorted to the food seating. I would unequivocally recommend the late sitting purely for ambiance.