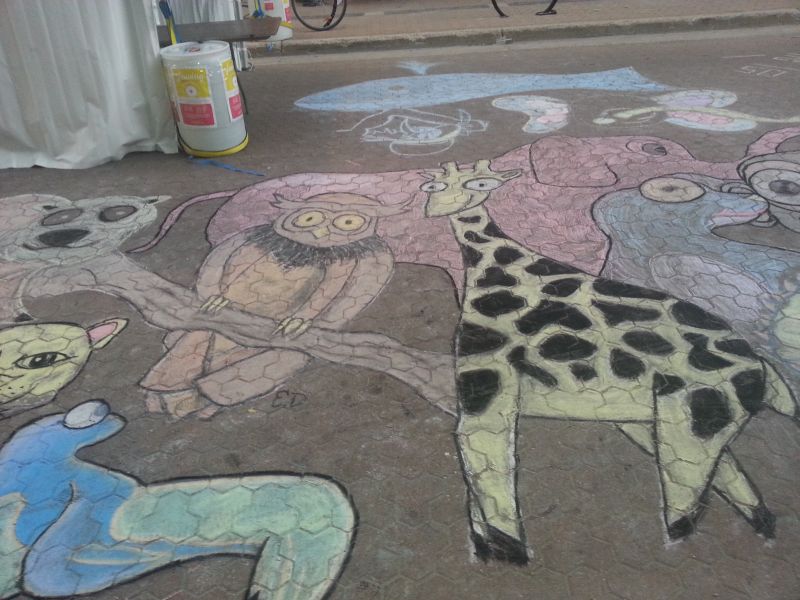 This has been a busy week. Work has been intense, I’ve had things to do every night (that weren’t fringing) and to top it off haven’t slept well since Monday. In short everything was somewhat aligned towards making me a grump and not letting me enjoy my first night.

Happy surprise then that I had a blast of a day. Despite mother nature trying to blast us with rain, hail and a funnel cloud I managed to pack a full day of work and four full shows in and probably would have done one more had my body not said: ‘enough.’

First up: Fraz vs. the Future (Venue 5, Son of Warehouse)

I snuck in what might be my only noon show of the fringe this year (start times seem overall later and noon starts particularly rare) by catching Fraz Wiest’s new show. This is a show that, at first, doesn’t seem quite as introspective as his previous one-man effort (FRAZ:Lonely at Last) but as the hour unfolds we begin to learn just what is motivating these ruminations on the nature of time.  Fraz is a gifted performer with a manic energy that manages to rescue the parts of his show that don’t quite work or that go on a bit too long but overall I really enjoyed the show. His scruffy beard and flight suit made his quite satisfactory Charlton Heston a highlight for me but I was also tickled that someone clearly loves the Schwarzenegger vehicle ‘The Running Man’ as much as I do.

Note: Smallish venue with not great ventilation (though they appeared to have improved on previous years a bit)

Sadly it was back to the salt mines after that but I’d already planned to stay downtown all night.

Chase Padgett was one of the breakout stars of last year’s fringe with his 6 Guitars show. Sadly I never got in to see it even when MTC brought it back as a Fringe fundraiser but numerous people I trust absolutely adored it. This year he’s performing in two shows, one of which is this sketch/improv effort with fellow performer Stacey Hallal. Oddly these two were in flight suits as well, perhaps that’s the kooky low effort attire of choice this year for non costume performers. Their mix of sketch and improv mostly worked really well and a number of clever callbacks gave more savvy audience a good chuckle. The audience was about 3/4 with them but there was definitely a contingent that despite the festival program description were disappointed it wasn’t more 6 Guitars. I myself felt a bit of disappointment that there wasn’t more musical content after Hallal began the show by playing a cello that lay more or less unused after the opening bit (and seems like a hell of a waste to bring from Portland)

All that aside it was an entertaining high energy show. My only comment would be that each of the Pickle Stand improv sections could easily have lost 30 seconds to a minute without losing anything. As with all improv your mileage may vary if that scene is really cooking though.

Tried out the wood fired pizza truck sitting near Pita Pit. Tasty crust but toppings a bit meh. Ham bits were a bit too big to really get well crisped by the fire and a couple of them were a bit gristle-y. Italian Sausage needs to taste like italian sausage, not just salty pork.  I’d give them another shot with a different pie.  That said portion sizes are quite good

(This venue is a sweltering shitbox if it’s at all hot or muggy and for some reason they don’t have the fans they had last year. Despite that I think all of us in line were very thankful that we got inside before that massive rainsquall hit. A couple of those lightning strikes felt as if they were the next building over.)

I swear I’ve seen these guys before yet for the life of me I can’t tell you what year, what venue or if I liked them.  They are undeniably talented guys who this evening felt if perhaps they were a tiny little bit off? There some really inspired bits but also a few too many blank moments and a ton more corpsing than you can really get away with with a two person cast. Perhaps they were on the verge of heatstroke, I certainly wouldn’t blame them, I know I was. They were still fantastic, I just couldn’t agree with the person who told me earlier that they were the equal of Outside Joke.

Pretty much my favourite long form improv troupe (though sadly sans Toby)  the OJ crew had another rocking house tonight. For those that haven’t had the privilege of attending one of their shows Outside Joke creates a new musical comedy every night based on a couple of audience suggestions (speaking of: kudos to the weird old dude in the front row for shouting out INCEST as a ‘rule you wish there was.’  I prefer not to know if he meant there should be a rule for or against.)

On this evening we were treated to the story of a rapper (Andrea del Campo) and the freakish pony (RobYn Slade) genetically engineered for him to make his image. Misguided scientists, shetland pony sex scandals and a bout of hand swapping followed as they worked their way to the big finish. A particular highlight: Leif Ingebrigtsen’s look of absolute disgust at the suggestion that the rap character try for a more ‘Kid rock’ feel when returning to his country roots.

I will probably see OJ again as usual as they are an improv group that truly takes the show in a completely different direction every night. If you’re planning on going just keep in mind that they often sell out early and the venue is not huge. Consider advance tickets or at least showing up fifteen mins after the previous show starts for first dibs.

Overheard in line (day 3): “Just how much do you think toonie sized hail would hurt?”

Outside Joke Breaks all the Rules. Still, genuinely enjoyed everything today, would encourage people to check out all four if they’re looking for some funny.

Leaflets/handbills rec’d: From a standing zero we’ve now hit 23! Including a pretty wild 12 in one lineup

Next Post: Day 4 and 5: Why yes, that was a stormtrooper on a motorcycle!