The real day one in Bangkok started with a thunderstorm of all things, seriously pounding thunder and lashing rain (at least what could reach my window.) Seemed like a good bet to start things off checking in back home and doing some planning for my days in this wild city. After a while I transfered down to the restaurant and ordered a pineapple pancake with honey, something that became a bit of a tradition (though I did try the stereotypical banana pancake for which the backpacker trail is nicknamed here as well once.)

Sitting in the restaurant overlooking the raindrops falling into the small pool I ate my pancake and tried to plan my day. As I understood it it was rare for rain to last very long as this time of year so I more or less believed the forecast that called for it to clear off within the hour. Much as the birds and flowers seemed to be enjoying it I wanted to take advantage of the slightly cooler weather while I could. For those who haven’t been/don’t know Bangkok is one of the world’s hottest capitals and is rarely less than 32 degrees other than a couple weeks in December apparently. 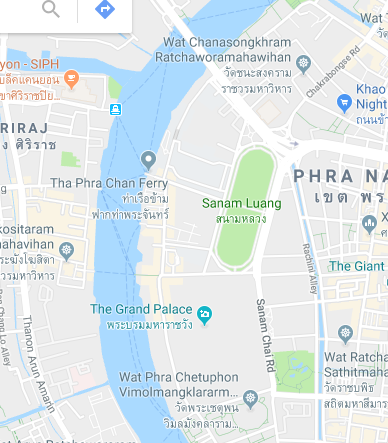 Truth be told I’d booked this place mostly on the friend recommendation and knowing it was near backpacker central for a cheap start to the trip, but thankfully it was also quite close to some of the sites I was most eager to see. The old city/grand palace area and Wat Pho, the temple with a massive reclining Buddha were all top of my list and I decided to cross them off early not knowing when/if I’d be back at this end of the city in my travels.

Did you know they drove on the left in Thailand? Somehow I did not until I noticed the cars on the expressway while my plane was landing. Traffic lights? Totally a suggestion. Right turn on red? Sure. Left turn on red? Sure. Barrel straight ahead because you’re on a motorcycle and clearly no laws apply to you? Sure. Oh god the motorcycles. Rare to see anyone in a helmet, people sitting side saddle on the back, infants lightly harnessed to a parent as they swerve in and amongst the traffic in search of a 1 second head start at the next traffic light. Shudder. I’ve been in some crazy traffic cities but Bangkok is definitely the new top of that list.

I was still in the process of discovering that that morning though as I snaked my way through the campus of a technical university on the waterfront knowing vaguely that the old palace was somewhere in that direction and figuring correctly that it would stick out rather obviously. Along the way however I passed the tiniest of alleys filled with tons of old men circulating looking at tables and binders. It wasn’t until later that I realized that this was Bangkok’s “amulet market” a place for people from varying professions to buy talismans to bring them luck or protection. Apparently they can range in price from almost nothing to megabucks for rarer antique ones. 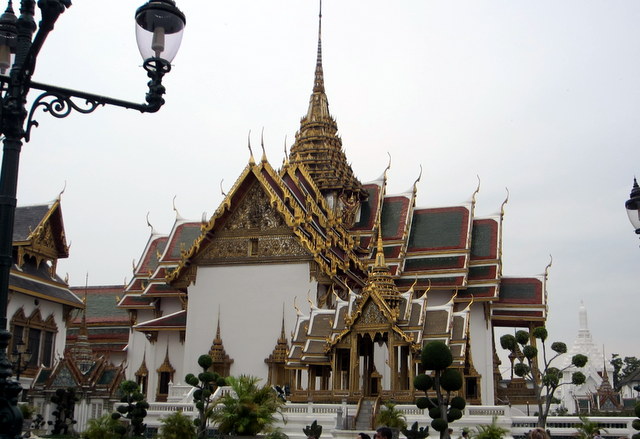 Wat Phra Kaew and the Grand Palace comprise some of the original areas settled when Bangkok was founded. It’s a massive complex of buildings surrounded by a wall and filled with about 8 billion chinese tourists. I’m sure I’m now in the background of thousands of selfie stick taken photos. It’s a pretty expensive admission ($20CAD) by Thailand standards but you get to tour the temple complex as well as the old royal palace (apparently now only slightly used by the King for ceremonial tasks.) The architecture was astounding throughout the temple district with a pretty wide range of styles even to my western eye though the central “Boht” holding the Emerald buddha was probably the highlight. 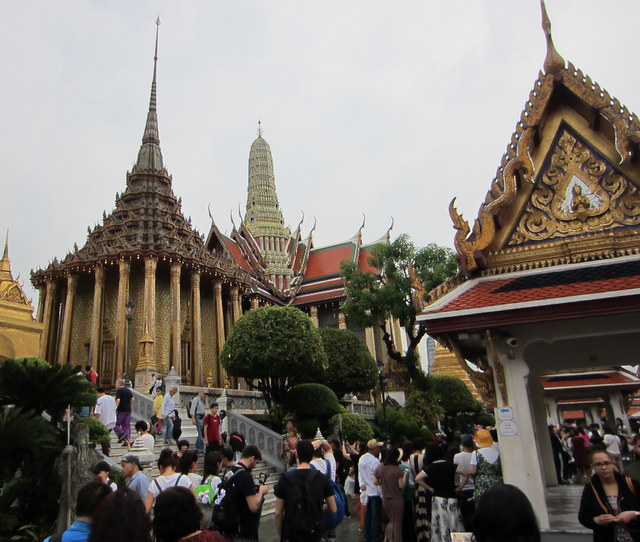 Almost next door to the complex is another religious complex called Wat Pho. This one most definitely has more of the feeling of a working temple though it also houses a thai massage school due to the cultural protection of the practice. The highlight of the complex is the truly massive reclining golden buddha statue measuring something like 50m long. 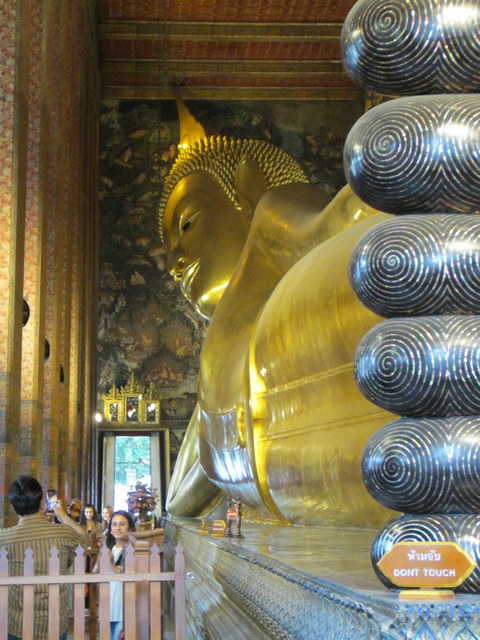 Also there were temple kitties everywhere: 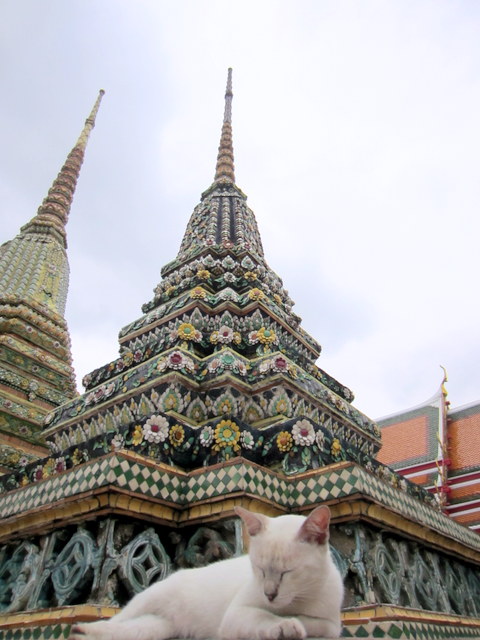 In between the two complexes someone asked me for directions (I guess because I looked like I spoke english) thankfully asking me for the one thing I knew how to find.

Once I finished at the temples I still had some energy so I started exploring further east, at first somewhat randomly but then realizing I was close to Bangkok’s chinatown I headed there and began exploring the warren of tunnel like alleys that make up the sizable chunk of town. Stall after stall of textiles, clothes, shoes, aliexpress random stuff mixed in with some pretty incredible street food. In the end I didn’t partake because I had something else in mind for dinner but I may when back in Bangkok. At this point though 85% humidity and 34C were catching up to me so after checking out the train station on the edge of Chinatown for some info on future bookings I hopped a cab back to the guest house for a swim and a shower.

Not going to lie, between the 50 odd degree temp swap in a couple days, lack of sleep and all the walking I gave in an had a brief nap, but I also had the name Hemlock in my head. After stirring and watching some godawful british game show on my flickery tv I found it in my guidebook. A tasty relatively inexpensive thai place with an extensive menu of things you wouldn’t find everywhere, and the reason it was stuck in my head was that it was all of 50 feet down the street. Seemed like an excellent day to end day one.

A different but delicious green curry, some Lahb and some shrimp rolls later I was done from top to bottom.I managed to sit down at a bar nearby and have a Singha as a decent local played some guitar but after about another hour it was all I could do to stagger back to the hotel, grab a couple water bottles for my mini fridge then stumble into bed. 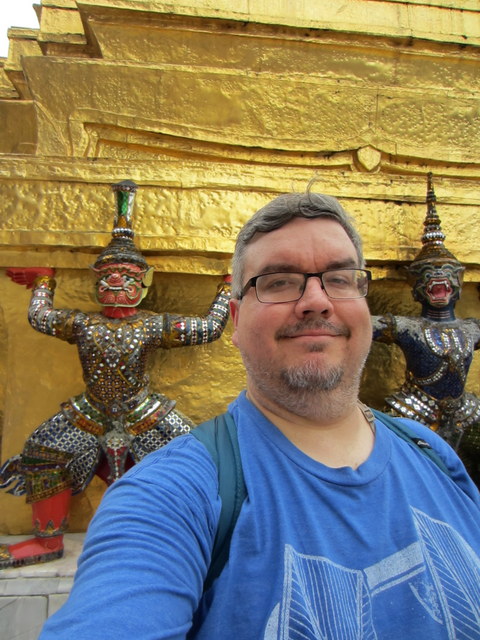 Previous Post: …it’s been how long since your last holiday?