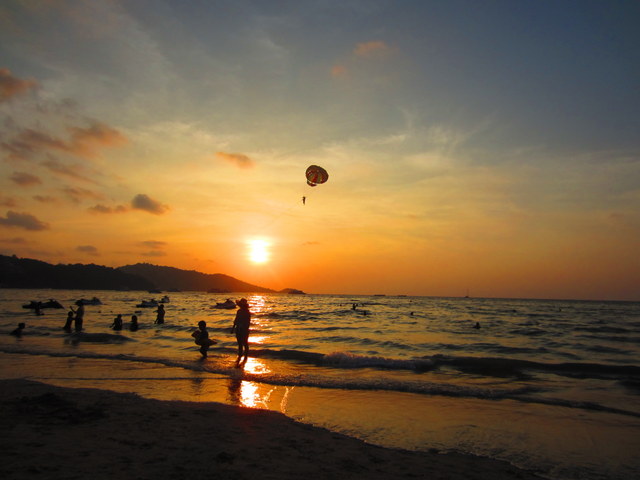 In 2004 at Christmas I was visiting my aunt and uncle in California with my parents and grandmother. We spent a good chunk of boxing day watching the horrifying videos of the tsunami coming in at various places in this region of the Indian Ocean. Now, having been here (this beach being one of the hard hit places in Thailand) it’s even easier to imagine how scary it must have been. Rewatching one video obviously taken not terribly far from my hotel you can just see that relentless rising tide slamming everything and everyone out of its way into the front line of buildings. You can see how many people believe the death toll would have been much worse even a few hours later here as the christmas revellers woke from their hangovers and headed to the beach. Now of course Thailand has its fancy new warning system and whatnot but it’s still sobering to think about as you walk down past the “Tsunami Evac Zone” signs to the beachfront. 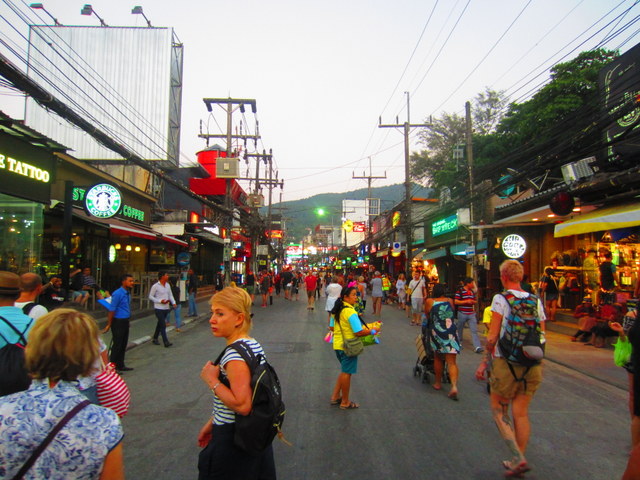 Today Patong is an odd place. It’s massively developed by thai standards (more or less the entire bay is filled beachfront to hills) but to us Canadians more used to the Mexico and the Carribean it seems less so. For starters there are few hotels directly on the beach and indeed few businesses directly on the beach. The latter is apparently because of another thai government crackdown that comes and goes but it’s certainly nice to be able to find shady spots at the top of a beach not covered in some hotel’s deck chairs. The actual beachfront in Patong town proper is more akin to a European resort area or say the area along the Malecon in Puerto Vallarta (though that is pretty Spain itself.) A few small hotels and guest houses, not many over 3 stories high mixed with souvenir shops and restaurants and all seperated from the beach area by a busy road. There is a thin strip of land mostly devoid of businesses between the road and beach some of which looks as though it is remnants of pre tsunami decorations (paths that are worn away/dead end for example.) The larger hotels tend to be a couple streets back from the seaside and none are particularly huge. There are a few taller towers in the town center area but none seem particularly new. Fancier hotel with older guests wise the new trend seems to be building out on the cliffs north of town where there is a smaller beach and a cab into town proper is definitely needed for most non-resort nightlife.

The beach is wide and sandy with a mix of swimming areas and (illegal but clearly tolerated) jetski landings. It’s not uncommon to see one or two large cruise ships offshore, rarely close enough to see the livery but I’m guessing Star Cruises or the like based on the groups I saw ashore. The water is ridiculously bathwater warm and shallow for ages… another reason the tsunami must have come out of nowhere for people as I don’t think I saw a cresting wave that didn’t come from a boat wake the entire time I was on the beach. I imagine that’s different in monsoon season of course but the Andaman has been endlessly gentle during my stay.

The town itself is… I don’t want to say sleazy but, yeah kinda sleazy. The core of the town has a very “downtown vegas before they cleaned it up” vibe. The previously mentioned fancy shopping center seems to serve as a sort of central cluster then most of the streets leading away from there are lined with bars and restaurants, all the sidewalks jammed with sweaty tourists and line after like of tuk-tuk and taxi arriving with people staying at the other beaches coming in to party. Bangla Road is the epicenter of the more intense nightlife (go-go bars, prostitution and frat boy bars abound) and is at least quasi pedestrian only but most of the surrounding streets have late night bars/restaurants and other diversions as well. Russians are everywhere, particularly of the musclebound gangster image cultivating type and indeed other than some backpacker aged folk from NA/Australia most of the tourists are european in general during my visit. After one visit for curiousity’s sake I mostly stayed a bit further from this area at night as there’s only so many times I really need a drunken russian woman stumbling into me and spilling her drink or some random tout badgering me about “you want ticket to fuck show? cheap price!” I did stumble into a couple different places a bit further out from that area that had a band playing and grabbed a drink or two at those several times. I don’t want to give anyone the impression that all of Phuket is like this. It’s a subsection of this one beachtown and most of other towns have very different vibes (even the other portions of Patong do) but be aware this is why a subset of people come to Patong specifically. Or this may be totally your scene and sound great, I’m definitely here more for the sights and sounds of the country and not the party scene though. 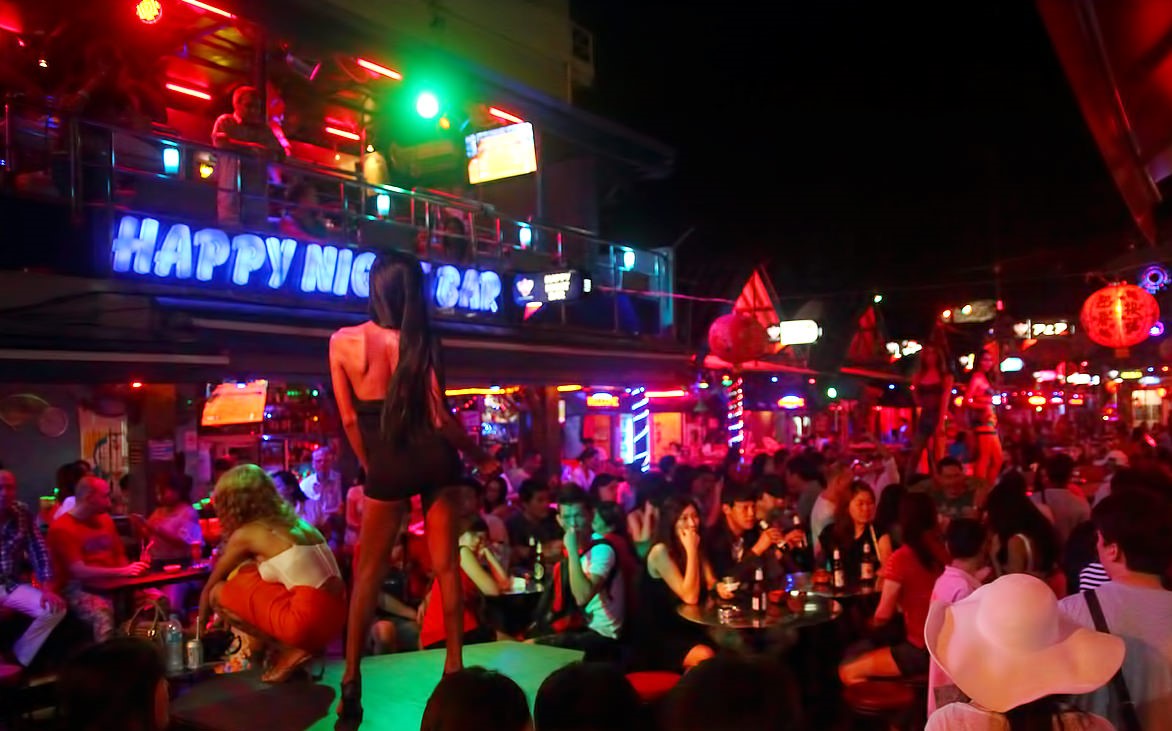 My nighttime photo didn’t turn out but this gives you the general idea of the scene.

One super frustrating thing I will rant about though is the abundance of massage parlors. I have literally no idea how they all exist in Patong or indeed in any of the tourist zones where every fourth business seems to be a massage parlor of either super legitimate or sleazy variety (or of course the ultra sleazy variety that are pointedly missing the “no happy ending/no sex signs that most of the middleground ones seem to have.) I mean more power to them if they are making a living and I know good thai massage is supposed to be phenomenal (maybe I will partake before I leave.) BUT, the annoying versions of these will have 4 or 5 women out front, often dressed in some garish outfit who will super aggressively bother you about a massage. Whatever, I can ignore touts, but the gross part to me is the last one in the line will always try and reach out to gently caress my arm as I pass by as a last ditch attempt and ugh… I do not like being randomly touched by strangers and I particularly don’t like it when I’m feeling hot and sweaty and gross and just want to get back to the hotel to clean up. I get that I’m a guy in his 30s travelling along so probably a prime target for you but ugh, back off.

As mentioned in the last post though this was always intended to be my destress portion of the trip. Most of you are aware that due to some bullshit with my employer I had my holidays cancelled on me last year so this is my first real holiday in two years. (I did snag a week at the lake with my parents last summer then proceeded to get a ridiculous summer cold/flu for most of it so it doesn’t really count.) So yeah… my day usually consisted of sleeping in until I felt like waking up, going for a brief swim in the hotel pool, having a shower eating a croissant then heading down to the beach for most of the day then watching the sunset before grabbing a ridiculously cheap dinner somewhere, maybe hitting the bar for a bit then walking back to the hotel for another shower and another great night in that massive king sized bed. Rejuvenating is an understatement.

Most days I ended up in the same cluster of odd fruit trees (I have no idea what the cluster pod fruits were though one landed very close to me one day and I started sitting a bit further away) for a bit of shade at the top of the beach. Daytime temps were hovering around 32-35 most days without a cloud in the sky. This appeared to be where many of the locals sat be they Thai or (more commonly) the somewhat tragic collection of ancient euro expats and their muuuuuuuuch younger thai girlfriends/wives (and some boyfriends.) Sitting amongst them one couldn’t help but wonder about inevitable forthcoming estate battles with family’s back home. Mostly I peoplewatched and swam, read from my eBook and thought about what I should have for dinner. 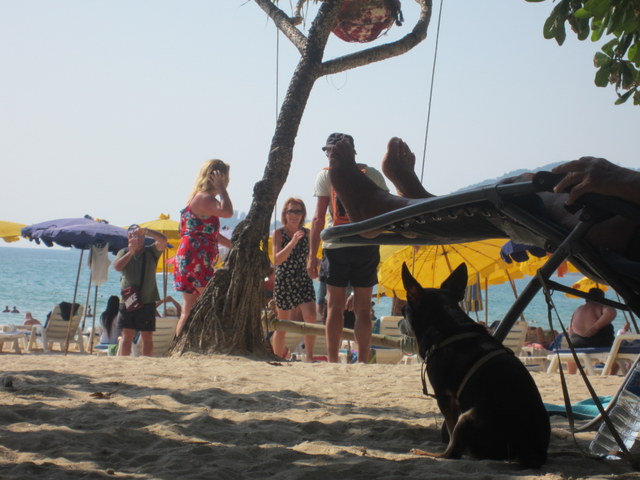 I’ve already covered food to some extent in this travelogue but you must understand that I LOVE thai food. The cheapness of thai meals here (even in this most touristy of touristy locations in Thailand) is astounding. Lunch is mostly a quick noodle, curry or soup from a roadside stand or mini kitchen. Chicken Pad Thai is of course a tourist food but also generally delicious and ludicrously cheap for decent portions. Pad See Ew or Khao Soi or various other things are usually not much more expensive. Or if it’s so ludicrously hot that I can’t face anything warm I might just get a papaya or mango salad, usually nice and spicy and super refreshing. Rarely are these meals more than $3-4cad all in.

Dinner I’ve been splurging a little bit more as there are some nice places here, but usually just to try more dishes rather than spending massively more in general. Not far from the hotel in an absolutely terrible spot right by the main road in and out of town is a really gorgeous little restaurant that really deserves a quieter beachfront spot (but then it would be double the price.) Here I ordered an appetizer of thai sausage and cashew shrimp wrapped in spring roll dough then deep fried, a som tam with papaya, a noodle dish I can’t remember and a small bowl of tom kha gai. Add on a pineapple smoothie and a bottle of water and I dropped a whole $15 on this meal (though since I had a kitchenette I took home the leftovers and actually got a lunch out of it too.) Honestly it’s necessary to splurge once in a while. One of the main downfalls of being a solo traveler is not getting to sample what your travelling companion is eating when dining out.

Overall my time in Patong has been relaxing, but I’m definitely ready to move on and see some of the other sights in this ridiculously welcoming country. I’ve decided to transfer to Koh Lanta to the south in hopes of easing back in to some diving/finding a mellower beach vibe then I’ll have to make a decision about either heading back north in preparation for heading to Chang Mai or whether I want to do any further island hopping in the south.