Somewhat frustratingly despite my best efforts I was unable to secure a dive while in Madeira. Many of the dive shops on the island weren’t starting operations until March or April because it’s “winter.” I thought I’d found one eventually but communicating with them was a constant pain and when I told them I was in for tuesday and asked for final details I didn’t hear from them again… hell of a way to run a business. In the end it seemed likely they were only shore diving in a pretty but not particularly exciting little cove… To be honest I’m guessing they didn’t have much interest and decided if they ignored me they wouldn’t have to work that day. 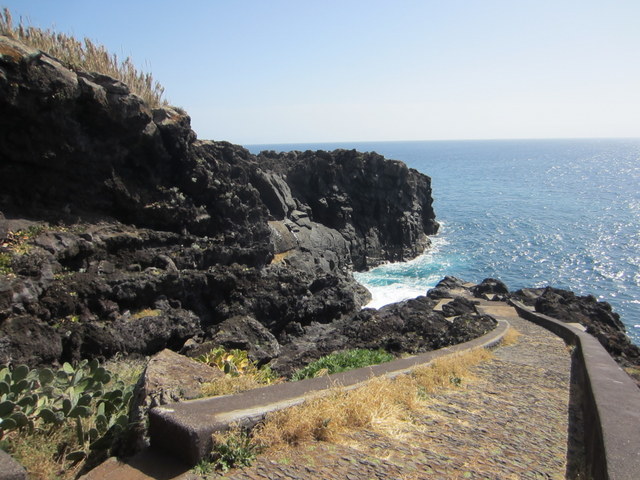 Punta Oliviera just west of our resort, path seems to be a relic of an earlier era

In the end I slept in a bit and we had a good walk around the shoreline and around the point. For whatever reason Madeira in general and this area (Canico de Baixa) in particular is very popular with Germans. While the area right by our hotel has a number of other hotels/small apartments even a 3 minute walk up the road in either direction takes you past a number of small rental homes ranging from a teeny walkup to larger multi bedroom homes with gorgeous gardens and balconies overlooking the sea cliffs. Unfortunately my german wasn’t really up to checking all the details but I may look them up once home out of curiousity.

After a couple hours of going up and down hills/steps/cobblestones we realized we hadn’t had lunch and decided to try the Taverna we’d seen on the way into the hotel zone. It was pleasant but kind of hilarious in that multiple times we were left alone for ages on the patio. It was pretty much the only place on the trip so far where we had much of a language barrier (the amount of English spoken by people in the service industry is astounding.) We ended up finishing the evening with a drink on the patio.

Wanting to explore a bit of the north side we booked a tour out to the volcanic caves with a couple of side stops. The tour itself had a bit more content from the tour guide this time and we were in a small Renault minivan. Honestly one of the more interesting things he let us know was just how many of the tunnels we passed through were relatively recent. He kept pointing out crazy zigzaggy roads going up volcanic ridges and telling us that was the old road to go where we were going. I can only imagine how long the roughly 30 minute drive would have taken before the tunnels. There was a burst of construction that finished roughly 15 years ago where they built an absolute whackload of tunnels and the highway that follows the south coast up in the hills. It’s a seriously impressive round of engineering.

We took the main road over the mountains through one of the few passes and eventually reached the entrance to the caves. A series of lava tubes large and small (some enlarged to allow easier access) they made a loop a fair way into the mountain. There were a number of different lava formations left behind that were neat to see. Somewhat hilariously in some of the larger water pools local winemakers had set up an experiment to see how their wine aged in the more or less uniform temperature water. It was a neat tour but the 3d video afterwards in the educational center was hilariously bad. 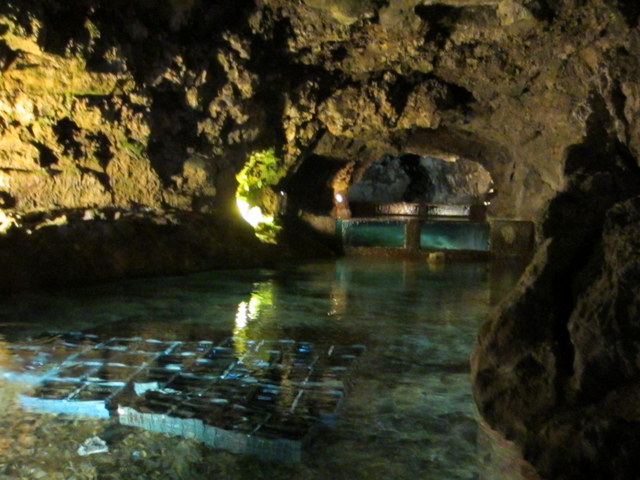 Moving on with our driver Antonio we visited the village of Sao Vincente. We were somewhat baffled when he drove up to the upper village then slightly back down the road and directed us to walk down the steep road then staircase. We followed the path down slowly and had a peek at the simple but pretty church and tiny graveyard, the newness of some of the stones made me think it was a graveyard of the “you get 20 years in the ground then we throw you in the mausoleum” variety. 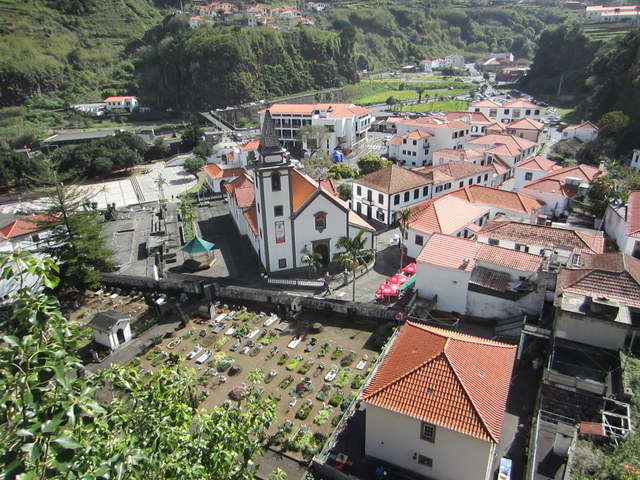 Moving onwards Antonio pointed us on the walkway down to the sea along a gently flowing river that clearly gushes hard when the rain is falling. It was actually the first time we’d seen strong breakers coming onto shore and I was honestly surprised not to see anyone surfing. It was a pretty spot and we both would have really enjoyed sitting down at a cafe and enjoying it for a while… unfortunately with this whirlwind tour that wasn’t really an option. 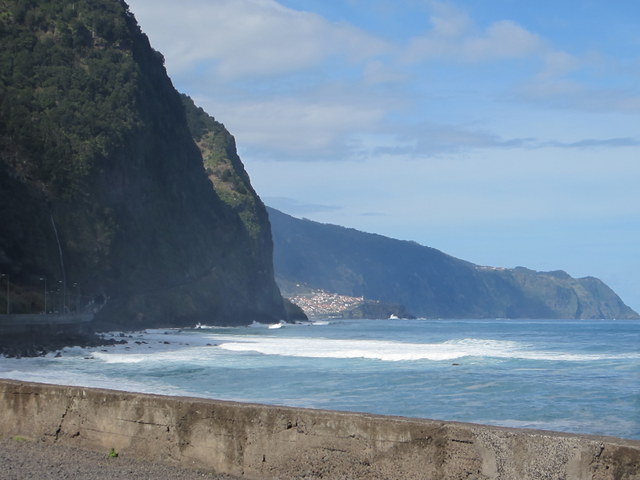 The last stop on our tour was actually another spot from the Travel Man episode, a cable car down to an isolated beach on the west coast. We didn’t have the chance to go down, but the view from above was breathtaking. I believe it’s one of the highest sea cliffs in the world. Apparently somewhere nearby there’s a glass floor observation deck that must be truly terrifying.

On our way back into town our fellow passengers decided to get dropped in Funchal and we decided on the spur of the moment to do the same and got out on the waterfront for a quick lunch. Somewhat happily we then discovered that the carnaval stuff we’d seen being set up earlier was actually now active even if they parade obviously wasn’t going to be for a day or two. We ended up grabbing some chorizo buns to take back for dinner and tried a few treats. Ginja (a portuguese cherry/berry liqueur, more on that later) in a chocolate cup. Crispy crusted chestnut tarts. A new tangerine poncha we hadn’t tried before. All delicious! 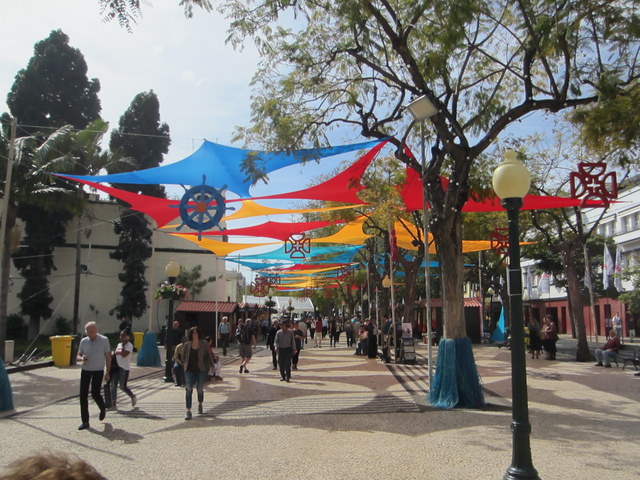 Winding our way back into the old town I decided we should go up to an area we hadn’t been to since the first day of exploration and there was a fantastic guitarist playing in the church square. We’ve been kind of shocked at how many buskers here have pretty elaborate sound systems. This guy had one heck of a pedal board set up and was doing a variety of styles over the hour or so we listened to him play. The Poncha was delicious, the sun was shining and the music was good. 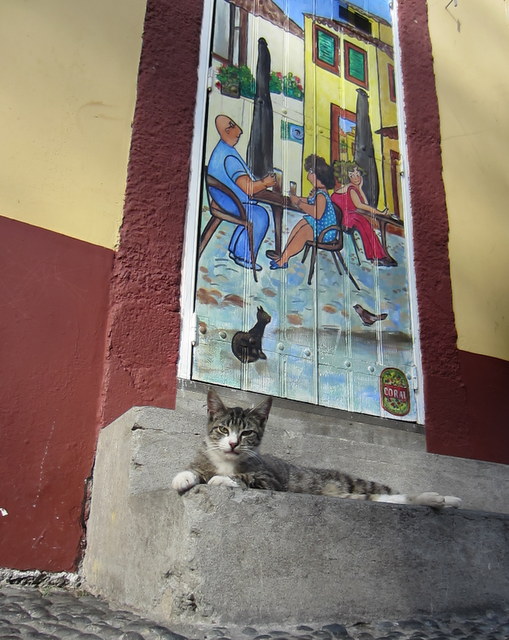 Together with the carnaval sneak peek was an excellent treat and a nice way to (almost) end our time in Madeira. We decided to take the public bus back to the resort for the first time. It turned out to be pretty painless. Not a ride for someone with vertigo though as all the twists and turns on a high cliffside road that were slightly wild in a minivan were even more in a tall bus with a driver gunning it around the turns. It stays off the highway and snakes along the cliffside towns and stopped within a 5 minute walk of the resort. Honestly if I ever visited again the Madeiran bus system seems pretty fantastic, I guess that’s required in a town with so much up and down.