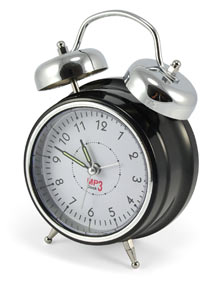 Some people have trouble waking up… apparently a lot of trouble. Some simply fall into a near death state when they sleep and could sleep through a nuclear detonation until the skin bubbling off their bones felt a little itchy, others wage a daily war with their snooze button. Most of these products are geared towards the latter and are designed to make the silencing process require enough thought that it’s impossible to do in near sleep conditions. Most of these products are available through that bastion of awesome products with punishingly unfair Canadian shipping ThinkGeek.com (only 85% bitter.)

More after the jump… 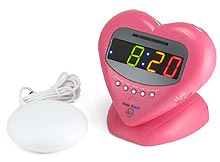 This is a new styling of an older product. Packing what a friend with the sister model calls “An alarm that can be heard five floors up” and a bed shaker that you can place under your pillow for an extra wakeup jolt, this product is geared towards sleep lovers who sink into a coma upon hitting the pillow. I’ll let your own filthy minds think of the less wholesome things people have come up with for the buzzer function (and yes you can turn off the audio portion and just use the vibe.) 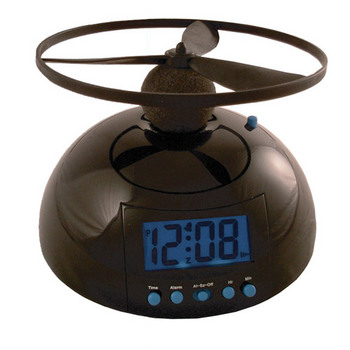 This product would be higher up the list if it did what your mind hopes it would upon seeing the picture, but the actual product is still pretty neat. When wake-up time arrives the blowfly fires the spinning disk randomly into the air to land somewhere inconvenient in your bedroom. The screech of the alarm is only ceased by replacing the disk on the launcher. I can only imagine the extra fun when your dog or cat grabs the disk and takes off down the stairs with it to bury it under the couch/litterbox. Thinkgeek has a fun video of the thing in use.

I have to admit, the retro robo styling of this thing makes me want one desperately, it’s like something out of Lost in Space. In lieu of a simply alarm, Clocky will begin to scream and turn his wheels randomly. The pesky little thing will throw itself off the night table onto the floor and skitter randomly around until you get your butt out of bed to hunt him down.

This one is extra out there… The idea is that when you don’t wake up, the damned thing will call random people on your cellphone number lists. Bad enough that this calls your friends, imagine your boss getting a 6:30am wakeup call because you can’t haul your ass out of bed. If this thing ever comes to market I imagine certain people will be getting their phone numbers blocked due to repeating infractions. 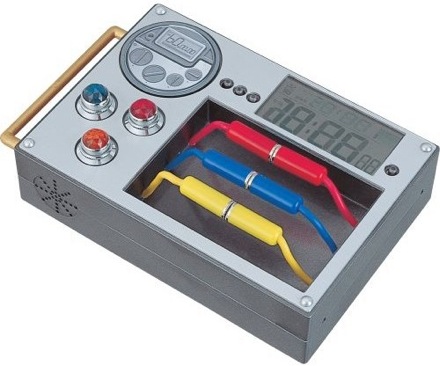 This incredibly cool gadget comes from (where else) Japan. To turn off the piercing wail one must somehow “disarm” the bomb by disconnecting the wires in the correct order. Messing up (which seems likely in still sleepy haze) means a loud explosion sound and simulated death.

Good luck getting this on an airplane to bring it home, I suspect you’d end up on a terrorism watch list for life. My mother already gets stopped on every trip for one thing or another, I need to get her to Japan to pick one of these up for me to increase the fun.

Thanks to Engadget and ThinkGeek for the info. The first image is of the MP3 Alarm Clock which almost made the list.