Apologies for the interruption, the internet connection in Big Sky was the shit (I was only able to steal wireless from another condo at long range) so updating was so inconvenient that I became lazy. Who wants an update without photos anyway!

Besides which, time was pretty packed while we were there and evening mostly involved hopping in the hot tub then having dinner and flopping down on the couch to watch brutal NBC olympic coverage. I’m pretty sure posts would have been along the lines of “Big Geyser Pretty… water HOT!” anyway. 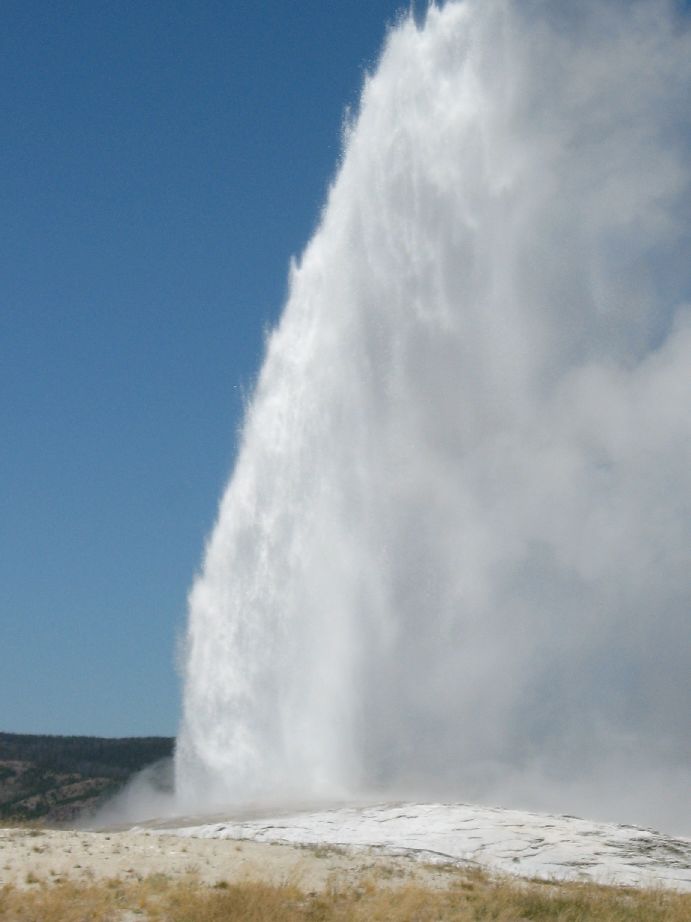 Old Faithful was fairly faithful, only making me wait a while during which I toured a lot of the lesser but awesome geysers. So many people get out at the parking lot and just see old faithful then leave that they miss a lot of the neater pools. As usual, death by korean or japanese tourbusload was around every corner.

Death was also around every corner on some of the paths, apparently the ground is only a thin crust in places an stepping on some section involves immersing your leg or entire body into water or mud superheated to the point where it can cook the flesh of your bones. To get that lovely mental picture out of your head, here’s a shot of an elk to make you go “awww.”

Also on this point of the trip was my second run at whitewater rafting, which was a blast as always. The river in question is known as the Gallatin, and while it was incredibly shallow at points it still gushed fast enought to be a lot of fun. The cute young lady guiding us was only a bonus.

Not me, but the same spot we rushed through the day before this was taken.

My friend Chris and his girlfriend Jodi came along with us on this ride as they happened to be passing through and we had a blast, I of course was probably the most soaked. This didn’t matter tons at first, but on the ride back to the lodge it became apparent that a recent wearer of my wetsuit had had a serious B.O. issue and the water was bringing back the memories so to speak. Given that this sign was at the top of the run I guess I should be lucky that’s all I smelled.

Got to love the grammar/missing word. I like to believe the missing bit is “is encouraged.”

That more or less wrapped up the trip though, not long after we headed back to Manitoba at full speed, stopping really only to see the Little Bighorn Historic Monument.

This is somewhere I’ve always wanted to go though I was expecting it to be typical American ignore the Native side completely but it was surprisingly fair. Unsurprisingly this is as a result of a fairly recent redevelopment that changed it from the Custer Memorial to the new name. The old views are still seen in some of the markers on the site, but in the tours given (and the audio tour you can buy for a nominal fee [highly recommended] you can hear the modern interpretation.

The classic view of the battle as some form of heroic last stand is without much doubt a total fallacy, the final lines shown by clusters of cartridge casings seeming to show Custer’s group disintegrating into total panic as his overconfidence led to the near total destruction of his command. The sheer cowardice of the cav and the stupidity of Custer in ordering a charge on a village that he had not even reconnoitered properly is really evident and it’s easy to see how an organized resistance from the skilled first nations shooters quickly caused panic in the cavalry troops.

What surprised me most was the Cavalry monument… I believe it was built around 10 years after the battle by the regiment and lists the names of those “who fought and died in battle against the Sioux.” From the years of bullshit and the media frenzy of the time I would have expected it to say something about a massacre or butchery as is far from rare on items of the time. Perhaps the regiment was being honest in saying they new damned well it was a true battle and honestly felt a little ashamed at the way things were being painted.

In any case I heartily recommend anyone checking out. It’s an interesting piece of history and a moment that marked the beginning of the end of any armed resistance of indigenous peoples in North America. It’s also a rather hot place generally, pack some water if you’re doing any of the hiking trails (and ankle boots as there are apparently rattlesnakes) but there is also a car loop that the audio tour covers.

NOTE: I wrote 80% of this on Aug 23, but I haven’t finished and posted it til now, my bad. School starting sucked. Regular updates to resume.