Sandra Lee… In my American foodie brethren her very name evokes the kind of disgust usually reserved for Rachel Ray’s spouting EVOO (followed by an explanation) or by College_Student_04029812 asking for CHEEP FOOD IDEAZ 4 DORM PLZ for the millionth time! Those of us lucky enough to live north of the 49th have thankfully avoided her frankensteinian cooking methods and trailer park arts and crafts aesthetic thus far so I will explain.

When I asked one of my friends if she’d seen the cake referenced later in this post her response was “those box cakes you used to get at KFC after they stopped using McCain?” As a result, I’ll start out by pointing out that I am not referring to Sara Lee, though I will admit that in my youth I somehow ate a few of those stale angel food and crusted mortal icing bricks that they forced upon us. CANCON rules (I’m guessing anyway) have thus far saved us from Sandra Lee, a “chef” who presents a show called “SEMI-HOMEMADE” where she takes premade products and combines them into meals that, at least in her words, look homemade.

I try not to be a food snob, I certainly have low grade junky foods that I love and won’t give up, but Sandra Lee takes it to a level that is just revolting. While some of her shows feature the occasional recipe that uses some pre-packaged ingredient in a novel and valuable way, most of them involve combining highly processed, very unhealthy foods together into one giant mess. The supposed time savings are often incredibly minimal or simply non-existent. The excessive use of easy store-bought “ingredients” means the end result often has a sodium or sugar level double or even triple what a proper dish would.

A few examples include:

A chicken and dumplings recipe that calls for a store-bought roast chicken (pulled apart), Pillsbury biscuit dough, canned gravy and the addition of 6 cups of broth. It also includes Bags of carrot and celery sticks that are then chopped up for addition to the chicken (yes you read that right… pre sliced carrot sticks, that you then chop… essentially saving yourself one or two knife slices per carrot at a 150% cost markup). I’m sure you can figure out the unnecessary repetition in this recipe from the chicken etc.  Really basic dough like a dumpling is one of the easiest things in the world to make using ingredients most people have anyway, hell even using Bisquick is tons healthier than the Pillsbury kind and tons tastier

I’d always thought Sandra was horrible from the odd time I flipped past her show while in the states or from the occasional unbelievable Youtube videos. I’d always meant to write a little rant about Lee, and when Amelie Gilette over at the AVClub posted the following this week, I had the perfect excuse: Sandra Lee’s Kwanzaa cake.

Tony Bourdain (who I love dearly but who often tries a bit too hard to be ornery) had this to say about this concoction:

“The most terrifying thing I’ve seen is her making a Kwanzaa cake. Watch that clip and tell me your eyeballs don’t burst into flames. It’s a war crime on television. You’ll scream”

This cake starts out as a grocery store stale angelfood ring sliced into two layers. She then adds canned icing by the quart.

At this point you’re probably thinking “man he’s overreacting… my mom used to do that…” There’s a reason that Amelie refers to the cake as: “clearly a pile of ridiculousness slathered in despair and sprinkled with nonsense nuggets.”

The next step is to open a can of apple pie filling… and drop it with a plop into the middle of the hole in the middle of the cake. Not content to stop there, she then covers the cake with comically oversized candles and sprinkles it with pumpkin seeds and corn nuts. The nauseating result looks like something you’d find on the table at an elementary school craft fair and is yet more proof that pretty much everyone who watches her show will die of adult onset diabetes. 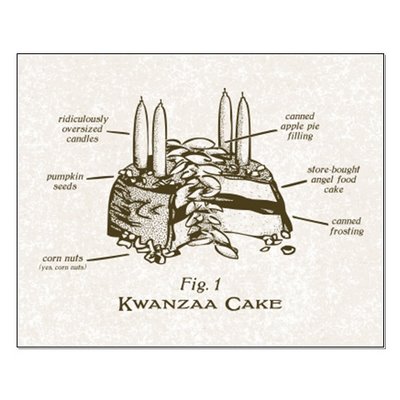