Apologies for absence, last school term was hellish. So many blog entries half finished as a major crisis erupted with a project. For those who might still check this site
on occasion, my sincere thanks. Here’s a super awesome recipe or two to get back into the habit.

Some people are of the opinion that soups other than the chilled variety should be saved for winter. Hogwash I say. (or should I go with poppycock as an outmoded but fun to say contrary exclamation?) A good, reasonably light soup can be the perfect addition to a summer meal or can, served with fresh baguette and the beverage of your choice, make an excellent light summer meal out on your deck/balcony.

Note, the names of the recipes are links to the actual recipe. 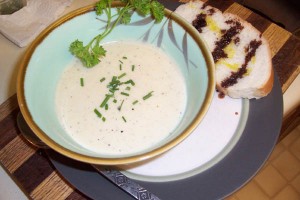 The flavour of this soup is very mellow at first with the after taste of the blue portion of the cheese making a really nice counterpoint. In my opinion this soup works best when accompanied by something else with a nice low key flavour.

Pair with a light sandwich, roasted chicken and provolone is a personal favorite. Also works nicely along with a large salad and a hunk of baguette as a light but satisfying meal on a sweltering day. Add in a peppy white wine or beer to round out the meal. 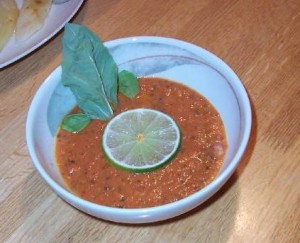 This spicy summer soup I came up with for an iron chef competition a few years back just screams summer to me. The smoky spice of the chipotle is balanced by the lime and basil to make a refreshing hot weather meal. Finish the soup with a dollop of creme fraiche or sour cream for a bit of extra contrast.

Extremely tasty suggestion include pairing with a grilled chicken or veggie quesadilla, Fish Tacos, or simply served with Tortillas or Nachos on the side. Practically begs for an accompanying margarita. 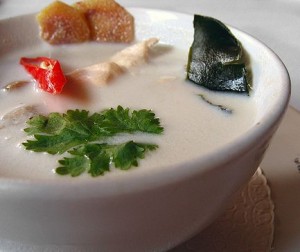 One of a few thai soups I could easily add to this list. The variety of flavours in this soup really make it sing on your palette and it’s filling enough that one bowl is usually enough. Handily enough, it’s also incredibly easy to make. If the recipe linked above doesn’t match your favorite restaurants version search around, here are thousands of recipes available.

If you’re having it as the main portion of your meal I personally feel it’s brilliant on its own, but a nice hunk of crusty french bread also works. This is another soup that is just dying for nice peppy light beer. The usual Thai accompaniment is a Singha.

them on the wiki!