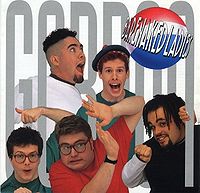 Why is it that certain songs stick in your head so intensely? It’s as if songs are tiny musical worms boring into your grey matter. Everyone’s experienced this with certain terrible and overplayed radio fodder. Some of these horrible tunes are so omnipresent when you’re shopping or on tv/commercials that you could probably sing all or parts of them without even knowing the title or artist. A couple recent examples would be pokerface, that milkshake song or Single Ladies. Unfortunately for humanity, we have a finite amount of memory in our grey matter, who knows what important knowledge is being overwritten with a Ke$ha song at this very minute.

It’s not all terrible of course, if a catchy good song gets stuck in my head I’ll likely remember it to the point where the vocal part becomes a lot easier when it’s released for Rock Band. As much fun as it is to sometimes do the vocals and guitar or drums simultaneously, is it really worth having to look up the formula for the volume of a sphere next time you need it?

It’s definitely the songs from your adolescence that are really lodged in there. My father appears to be able to sing every three dog night song from memory despite the band having broken up for the first time in 1976. I especially noticed this when I recently fired up Grooveshark and queued up the entirely of the Barenaked Ladies Gordon album.

My friends Christ, Geoff and I all listened to Gordon pretty much nonstop for a while. It was released in July of 1992 when I was 13 years old and I kid you not, when the songs started to play, I could still sing them front to back with zero mistakes. Next I threw on BNL’s Maybe You Should Drive and Moxy Fruvous: Bargainville, same deal… though with MYSD I at least occasionally made a mistake. Gordon, Bargainville and tapes of Simpsons episodes were always on the mini boombox for late evenings in our tents at scout camps, usually accompanying a game of Asshole or Crib.

Incidentally, is anyone else amused that the Album cover changed on its reissue? By then they were going a little more mainsteam, Stephen had lost a fair bit of weight, Ed and Tyler had radically changed their looks and Andy had left the band. I suppose it’s fair because their image had changed a lot. It wasn’t until recently that they started once again putting pictures of themselves on the album covers. I’m guessing they were a bit embarrassed by the photos on the front of Gordon, but it’s always how I’ll remember the album (which I originally listened to in Cassette tape glory.)

This got me thinking, what other albums did I listen to a ton of front to back from 1992ish to 1997? The Counting Crows for sure, a few individual grunge albums, Melancholy and the Infinite Sadness, terrible 1990’s aerosmith, Dookie, and a lot of soundtracks/orchestral as I got really into music at school.

I’m sure there’s something I’m forgetting, anyone have an iconic (or idiotic) 90s album they remember front to back?

If I had a Million Dollars, Music, Nostalgia