Finally feeling refreshed after a bit of a sleep in (at least compared the previous few days,) I started off my day by posting my day 1 rundown on the blog and throwing out a few emails.

The day before one of the other guys sitting around the dining area had mentioned that the Auckland Museum was well worth the trip, not just for the exhibits but also for the views from the high point it’s situated on. A quick check at the front desk for which way to go and I was on my way. The walk was particularly interesting, taking me through a couple streets I’d explored before, before sending me across a bus only bridge that crossed the motorway. The middle of this bridge offered some panoramic views of the port area of town. Even more interesting was a tiny cemetery dating from the relatively early days of Auckland. Founded not long after the city was, burials were relatively quickly restricted, then stopped due to concerns from local residents about the health impact on groundwater etc. What remains are many graves and their stones from the mid 19th century. Most are in amazingly good shape and covered in a canopy of trees and moss that lends the whole place a delightfully spooky air. Sadly I didn’t get a chance to go back at dusk.

A little ways after crossing the bridge I came to the Auckland Domain, a large relatively central park that made me think very much of Assiniboine park back home. This comparison was reinforced by the Cricket Ovals I passed at the entrance (understandably on a much larger scale than back home) as well as signs pointing towards a duck pond.  However, instead of a pavilion and band shell in the centre, this park had a steeply rising hill capped with the Auckland Museum and cenotaph. The view was worth it alone. 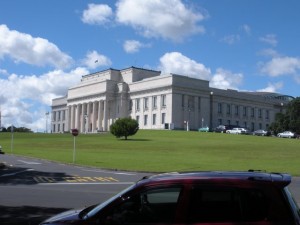 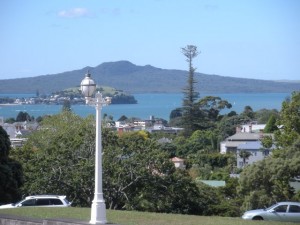 The museum itself has a large exhibition on the effects of war on New Zealand, a natural history section focusing greatly on the Maori view of flora and fauna as well as a large exhibit on volcanoes and how they’ll kill us all. The centerpiece however is their collection of Maori artefacts and the Maori cultural exhibition.

The cultural exhibition was quite good, though not cheap for what was basically a half hour show. Dancer/performers in native garb took the audience through a variety of their arts. After opening with a welcoming dance and some explanations, we were shown a variety of games, mostly designed as exercise and training for battle. The presentation ended with the Haka as made famous by the All-Blacks rugby squad. It was every bit as impressive and intimidating sounding as I expected, though I’m hoping when my tour does the big maori stop I’ll get to see it again. Once I’m somewhere with less expensive/free internet I’ll upload the video I took.

The experience continued with a truly stunning variety of different Maori exhibits. Woodcarvings, ancestral posts from fortified villages, carving tools, weapons and implements made from basalt and jade filled the first floor of the museum. Some of the most impressive pieces included the full canoe with intricately carved prow and stern and a massive jade adze that was so beautiful I can’t imagine anyone ever actually using it as a tool. However, the true highlights for me were the authentic buildings preserved inside the museum.  Large structures, almost every inch intricately carved with ancestral figures, tongues stuck out in an intimidating manner and eyes inlaid with shell material. To expand on the Maori examples, there were also several galleries full of similar artefacts from other pacific island nations such as Fiji, Tonga and the Cook islands. 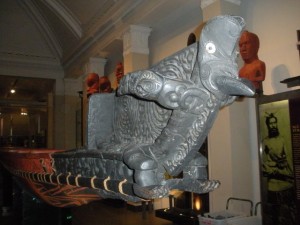 Moving upstairs, I got to discover the Maori version of NZ natural history as well as see a few stuffed examples of the local wildlife including the adorable Kiwi, and a massive Cassowary that convinced me that if I see one in the wild it definitely needs to be from a distance. There is something definitely prehistoric about those things, and an Ostrich sized bird that can disembowel you easily is not to be trifled with. That’s an Australia thing though and they’re extremely rare. The last exhibit on the floor was all about volcanoes. I’d realized that NZ had a few, but the museum enjoyed highlighting the fact that the reason the view was so great was that they were on the lip of the crater of a still quite active volcanic system. In this exhibit was a small typical kiwi living room where you were invited to sit and experience the beginning of a major eruption in Auckland harbour. We got a view of the harbour out our “window” as it began to steam and bubble, then as the full eruption hit our house began to shake then violently crack as the blast wave hit. It was really well done and carefully presented to encourage Kiwis to learn their earthquake/volcano evacuation plans. I can imagine this is fairly present on everyone’s mind here after Christchurch’s major seismic issues last month.

The final main area was a combination of an exhibit similar to the Manitoba Museum’s life in Winnipeg in the past and a miniature version of the War museum in Ottawa. All of New Zealand’s wars are represented, beginning with the British wars against the native inhabitants. This in particular was done in an effective manner with one room divided in two, with each side being the war from either the colonial or Maori perspective. The rest of the exhibit was devoted to more recent wars where the story of the New Zealand (and Australian) contribution to the allied war effort is told. Much like Canada, Australia and New Zealand seem to have come of age as a result of these conflicts and it was interesting to add another colonial perspective to what I know of Canada’s role. The final exhibit was a collection of British/NZ honours and medals, unfortunately, their only Canadian example was the North West service medal given to soldiers who participated in quelling the Metis uprising (Riel mentioned briefly in a very Brit-sided view /rolleyes.)

I’d honestly figured the museum would probably take up two hours of my day, but I ended up spending 4 hours wandering the halls, completely neglecting to have lunch. I’d made myself dinner in the hostel the night before so I figured I could treat myself this evening and found a nice bistro with a patio overlooking a public square in one of the shopping districts after some walking. Newest NZ culinary lesson learned? They like to put lettuce and tomato on a steak sandwich, just wrong. Delicious regardless though. 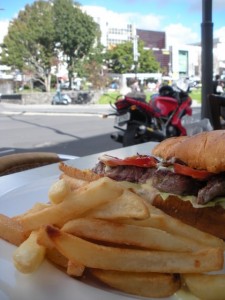 The last bit of excitement for the day came after I spent some time browsing up and down the rest of the street and caught the nice downtown ring bus they have that goes right by my hostel. Two corners into my journey, the driver apparently wasn’t paying close enough attention and missed a light changing. *Smack* we’ve crunched the back of some woman’s sedan. The driver came to check that we were all alright (thankfully everyone was, it takes something a lot nastier than that to move a bus much) then went out to check on the victim. These buses have video feeds of various places on the bus as well as a forward camera so we could see quite well. She was alright too, but as he backed the bus up a bit so they could see the damage her trunk looked quite squished. I felt sorry for the driver as I recognized the car, a full sized Mercedes that I believe Top Gear informed me goes for 150k euros+ so lord knows what it costs here. All these worries I’ve had about getting smacked by traffic and THIS is what happens.

Tomorrow is the start of my big tour (the bus leaves at 8) and I decided to make it a relatively early night despite a new Chilean roomie who plans to go party til late. At the very least he’s made me feel better about the amount of stuff I packed. I’m peeved because my one main back is pretty much full if I empty my day pack. This guy has two full sized suitcases, several shopping bags with shows and other things and 5 shopping bags from his purchases today.

I have no idea what the accommodations are like the first night or two of the tour so there may not be any updates for a bit, there should definitely be some good pics once I do upload again though so stay tuned.