Reasonably bright and early today, though nothing like yesterday’s ungodly hour. For the first time since joining the tour I wasn’t repacking my bag to get it on the bus come morning. Instead we all had a quick breakfast, packed our day packs and headed off for the Abel Tasman water taxi. As part of our tour we were given a one way trip by boat to a spot one bay into the park. On the way we went for a spin past a lonely rock called split apple rock, saw our first penguin (sadly I missed the picture chance) then tooled off down the coast past two offshore islands that are used as bird sanctuaries since the various invasive species don’t have access. On the shores of these islands were some very cute seals, though if you head farther down the coast there is apparently a full colony of them that one can swim with. It’s hard to describe the beauty, my camera doesn’t really do it justice in this light. I’m hoping David’s pictures will solve that problem once the trip is over and we all exchange things, but just imagine all the blues and greens up a few notches. 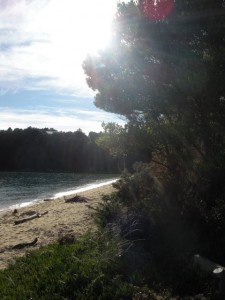 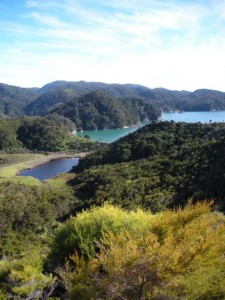 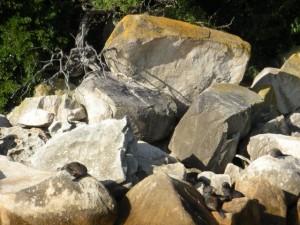 My abused feet were not happy with me as I began the initial climb, but once we’d reached the top the track was in fact quite level most of the way back, taking a gentle slope down to a beach at one point, but nothing that set off any cramps again. At one point we spent a few hours on a beach in Stillwell Cove and most of us even had a short nap laying in the hot sand. Can’t think of many better ways to spend a Friday afternoon than that. 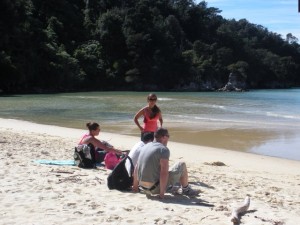 Every few minutes along the entire path the trees would part and give us an amazing view of ocean, islands and mountains in the distance behind. When we weren’t distracted by the view we were being serenaded by unfamiliar birdcalls or the gurgle of small waterfalls and streams being fed by the previous day’s rain. Conveniently enough the path ended right next to the cafe from the night before and a few of us indulged in a pick me up, I snagged a berry smoothie that was marvellously rejuvenating. Unfortunately on returning to camp and taking my boot off my ankle absolutely seized up as I tried to walk to the shower in flip flops. I don’t think it was this hike that really did it, I think it was an injury from the volcano trek that I’d simply been walking through and today’s walk set it off for good. I’ll be resting it as much as possible the next few days to hopefully keep my options fully open for the big glacier next week. Still, it made the rest of the night really unpleasant walking wise.

Dinner was down at a local burger stand that E.T. insisted was the best he’d ever had. By the time we got there it was 7:30ish, and there were only a few picnic tables outside so seating was a challenge. Adding to the fun the crew decided to serve most but not all of our burgers at once so it took the better part of an hour and fifteen to get our food after most of us hadn’t eaten since 8km’s and 8 odd hours earlier. When they did arrive, the burgers were somewhat monumental. Most of us ordered one called the Hau which was a big patty and essentially an entire garden on top. I don’t understand the love for beets on beef down here, but I gave the pineapple and fried egg a try and it was quite good. Of course by now it was pitch black but for a few meagre candles so who knows what else was in there. Sad to say that after a walk back and a quick beer by the fire it was lights out.