Glorious late start today, 9pm departure as we took off from Hanmer Springs towards Kaikoura. Today was somewhat of a bittersweet thought as normally we’d be staying in Christchurch tonight, but since the earthquake only 2 of the hostels remain open and have no place for us. Instead we’ll be staying in Kaikoura tonight and having to make up the time tomorrow with an early start.

The weather was cloudy and cold again today, most of spent the morning shivering as we waited to board the bus. Even the Winnipeg kid himself was far from warm. Despite the grey skies the scenery was absolutely epic today with every corner of the road revealing a vista worthy of a sweeping Lord of the Rings shot. We climbed up and around various deep ridges and valleys, crossed a ton of scary one lane bridges and eventually ended up in Kaikoura.

This was one of my most anticipated stops on the tour as we spent the afternoon on our dolphin encounter. Off the coast of Kaikoura is a submarine trench that’s full of plankton and other tasty marine food. As a result there are a huge number of these Dusky Dolphins hanging about (apparently around 2000) and we got to go swim in a pod of at least 200. It was quite possibly the greatest experience of my life. Everyone’s favourite fashion moment ensued as we all struggled into full two piece wetsuits, flippers and snorkels, then watched a safety briefing that seemed to mostly consist of the patently obvious instruction to swim towards the dolphins.

We did 4 separate drops into the water, with the captain speeding us back to the front of the pod every time they passed us by. A quick drop off the back of the boat and we swam full speed towards the dolphins, making goofy noises through our snorkels to try to entice their curious natures. Almost instantly I saw my first pair of them fly by at top speed. They’re fairly small dolphins, sleek and shiny with slim black dorsal fins and white/grey lower halves.  They’ll follow you as dive down or as you swim in circles, coming in to investigate then heading off with the rest of the pod. 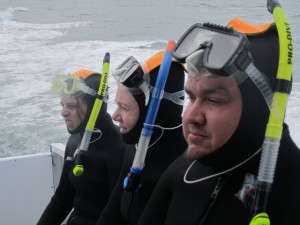 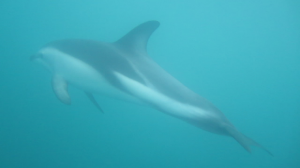 My last swim was the best with what looked like a mom and calf sweeping by, then a group of 6 or so doing several full turns around me until I got both  a snorkel full of seawater and a little bit dizzy.  As I drifted along making my silly dolphin sounds through the snorkel I saw three other big groups swoop by. Unfortunately a few of our group weren’t doing so well and upon returning to the boat I saw more than a few very green faces. Luckily they’d semi required by land, but unfortunately they all missed a rare treat on the dolphin trip as we happened across a sperm whale taking in deep breaths before a dive. The thing was massive but the guides insisted he was just a teen despite dwarfing the boat. Apparently the dolphin operators don’t have a license to take us to see whales unless they’re directly in our path so we got VERY lucky in seeing that. After a couple minutes he dove, splashing his tail and making us all oooh and ahhh. 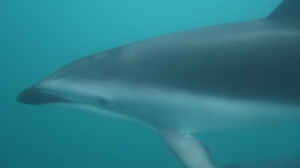 Since returning most of us have been sitting in our bunks here at the “Fish Tank Lodge” savouring the experience (and in my case writing 5 postcards or so.) There’s apparently a decent Thai place here in town, so we’re going to go grab some Kai in a minute then likely fairly early to bed for a 6am departure tomorrow.

Next Post: AA Day 13: Apparently we scare off drivers…