The weather has been amazing so far on this trip. Mostly sun and clear skies punctuated by the long lazy white clouds that New Zealand does so well. Unfortunately this morning we got our first taste of rain for the trip as we awoke to a persistent drizzle. Adding to the fun was the ungodly hour of 5:45 as we got ready for a 6:45 departure. With the way these tours work, Ali Bar Bar was picking up a few people returning from the south island (as some of us will be in 2 weeks) at our hostel that morning as well. Despite the fact that they were joining an existing group they scattered themselves randomly over the bus. In particular one German (of course) woman had a bag in the seat next to her. When one of our crew asked if they could sit there she said “NO, my bag is there…” Luckily for her I didn’t hear her or I would have gone off on her. Eventually after I leaned over and said we’re going to need all the seats, the bus will be more than full she finally moved her ass over. You’d think she was prepping for an 8 hour ride when in fact it was a mere 15 minutes until 12 of us were offloaded at the ferry terminal. Logical extension of the beach towel syndrome I guess.

The rain let up as we got into the terminal (of course) and the skies stayed fairly clear for the crossing. The ship was reasonably big so there wasn’t much roll but a few of the team popped various seasickness tablets just in case. The ride itself is 2-2.5 hours of more or less open sea as you cross the Cook Straight, then an hour or so of sailing into the sound on the other side up to Picton. The shores of the sound are gorgeous, hills carpeted with trees rising steeply from blue green water. Here and there dwellings dot inlets and hilltops varying from megamansion to humble cottage, most clearly accessible only by boat. 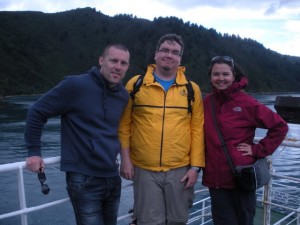 Eventually we docked in the small town of Picton where we met Nick our new driver who told us to call him E.T (a nickname apparently bestowed upon him because he phones home a lot.) He was late to the party unfortunately and the rain began again as we sat there. Luckily it wasn’t too long and soon after we’d hit the bakery for some Kai (food) and hit the road. This area is actually New Zealand’s wine country and it wasn’t too long before we stopped off and sampled some NZ wine from Nautilus Vineyard. The area specializes in Sauvingon Blanc which is not my favourite, but I tried some very nice Pinot Noir. When push came to shove though I waited until later and bought a bottle of Aussie Shiraz for dinner.

This was a heavy travel day as we had to get to the Abel Tasman National Park that evening, but we still made a short stop for a swim at the Pelorus River (god it was cold) as well as a shopping stop for both Mussels in Havelock (the green lipped mussel capital of the world) and groceries in Mara. Some added excitement here as 3 of our number were doing some optional activities, Marco and Eva heading up to pilot a stuntplane and Patrick hang-gliding.

Unfortunately for Marco and Eva it was too windy and they were forced to postpone (though they ended up getting a sunrise flight instead on Saturday.) Patrick got to go up towed by a microlight and spent what sounds like a glorious time coming back down again over the many orchards and hop farms. While we watched him prepping a Royal New Zealand Air Force chopper came swinging in over the runway and landed as the Hang Glide operator told us they’d been flying over the rainforest, scanning for pot and sending men down to hack it all up. Sure enough, soon after landing the crew started coming out carrying big bundles of what very clearly was high power pot from the smell. What Marco and Eva didn’t get to see because they were off signing release forms was the small stunt plane land at full speed only a few seconds after the chopper cleared the runway, fighting the wind with his left wing down until the last second. The Hang Glide guy remarked drily “He’s not the most patient one.”

As we drove up the coast after picking them up we got a gorgeous rainbow crossing the sky, conveniently we weren’t far from a lookout so we managed to get out and take a shot or two. Once we got to the park we checked into our dwellings on the edge of the area, a place called the barn. Very much a farm converted into a hostel/campsite, all of our team were ensconced for two nights in very cute little huts with floor to ceiling windows in the front. The most important thing was that the beds were the comfiest we’d seen in a while. After a nice barbecue we headed down to the local waterfront (when the tide is in) cafe for a few St. Patty’s day drinks. A double Jameson’s later and I was ready for bed, but not before we all got to hear one of the bar staff do his “Park Cafe” rap. 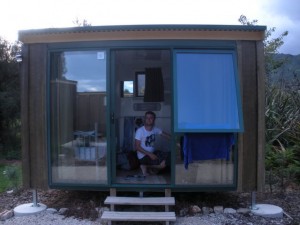