Fantastic day today, made up for the shit time we had trying to sleep with our Contiki friends. They rolled off early this morning and in prepping woke us all up around 6. After a rather dismal provided breakfast overall enthusiasm for the day was low. This was not helped with the less than speedy service and continued grumpiness from the Franz Josef glacier staff at their starting area. Debbie is of the opinion (reinforced by later conversations) that it`s the end of the year and everyone is a bit punchy. Lord knows there`s not much else to do in this town as it`s quite tiny. Basically a few hotels and hostels, some cafes, one tiny grocery store and atm and that`s about it.

Thankfully our guide for our group was fantastic. Her name was Jess and once she found out we`d all done the Tongariro and were comfortable on the ice she took us through a few places that were fairly intense. Just getting to the bottom of the glacier is a couple kilometre hike and overall not taking into account the vertical it`s about 8km. The glacier itself is very pretty, quite different from my memories of Columbia Icefields. Once we reached the ice surface we strapped on our crampons and began to head up the ice surface, Jess leading the way. There is a ton of running water and a fair bit of surface melt so she was having to rechop footholds a good portion of the time. The guides had chosen today to break an entirely  new trail, which in some ways was amazing, but made for some doubling back. I also somehow ended up leading our group through a really narrow crevasse that had water running down the whole length. It was narrow to the point of needing to take off my backpack and lift myself through the tight parts and I was absolutely drenched by the end. 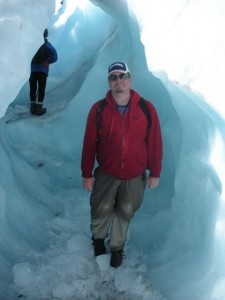 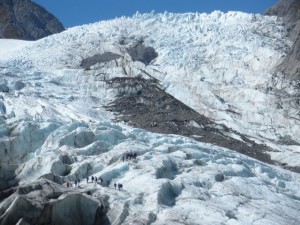 Overall it was a great climb-trek but my boots were absolutely soaked. Since they`re the only real pair of shoes I have here this may be a problem, but we have a long-ish bus trip to start the day tomorrow so hopefully they`ll dry. All us boys decided to spring for the hot pools add on and spent a lovely hour and a half soaking in the various giant hot tubs across the street. Much more laid back and relaxing than the theme park atmosphere in Hanmer Springs. We just got back from a nice cafe here in town, much better than last night and we`re basically mostly ready for bed already.