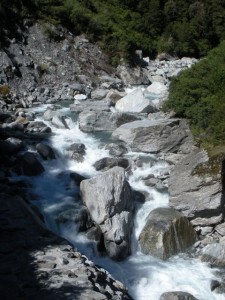 After another terrible sleep at the Rainforest Retreat ended with a 5:30 AM crash from upstairs, I couldn’t help but hope that one of our noisy neighbours had met an untimely end. Sadly it was the other tour types getting up and ready to go. This was extra annoying this morning because we didn’t really have to be up until 8. Eventually we dragged ourselves out of bed, through a zero pressure shower and into another breakfast done in a half assed manner. Unimpressed.

Today was a bit of a stop and go travel day. We travelled barely half an hour before hit Fox Glacier and turned off to visit Matheson Lake. Matheson is known as a reflecting lake because the tree tannins in the water create and excellent reflecting effect. This one in particular is much loved because of the line of view that allows it to reflect Mts. Cook and Tasman, the highest mountains in NZ. We all took some beautiful pictures along the hike then hopped back on the bus. 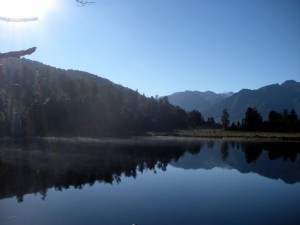 Back to whining: For some ridiculous reason our current guide took us to the “shop” in Fox instead of telling us to go back to the Franz supermarket. While the Franz one wasn’t huge (think along the lines of the grocery store at one of the Whiteshell lakes), the Fox one was more along the lines of the food selection you’d see at a dingy gas station. David describes it as the selection of food you’d raid to donate to a food bank. I cannot disagree. We were a little annoyed, most people would have been happy with a sandwich but had to do more expensive options.

Our next (lunch) stop was at Knight’s point down on the coast, a beautiful overlook of what is apparently an oddly glassy Tasman Sea. Sandflies everywhere of course, but a great view for a lunch. Not long after we got back on the bus we stopped at Ship Creek, a small creek running into the ocean where a schooner once wrecked. Our driver stopped us here because he thought we’d be able to see dolphins, and sure enough skimming along remarkably close to the beach we’d occasionally see a family playing. Our last mini-stop of the day was at the Blue Pools, a 30 min hike down to a gorgeous river.

Tonight’s accommodation is far more pleasant. We’re in a tiny town called Makarora but we’re put up in nice little A-Frame Chalets. Things are starting to get a little chillier as we climb into the New Zealand southern Alps again. It was Karaoke night in the cafe here and the tour bus from Adventure Tours’ sister company is here too. They entertained themselves by picking songs for members of their group and “entertained” the whole bar. At least the beer was cheap…

Tomorrow it’s Queenstown and time to decide how I should get my adrenaline going.