The rest of our time in Queenstown passed in somewhat of a blur, we were trying to recharge our batteries a bit for the last run of the tour. The next stop was something I was most looking forward to, a cruise on the Doubtful Sound (really a Fjord) an absolutely remote natural wilderness. The tannin’s make a top layer of fresh water that filters light and keeps the salt water underneath extra dark. This lets a variety of deeper ocean species live on the fjord walls a few meters down.

Once we’d cruised off in the bus we eventually arrived at Lake Manapourri. Once on the lake you take a quick launch over into the western arm to a completely isolated road built for the construction of a hydro dam. This takes you across Wilmot Pass and down into the Fjordland national park. Doubtful Sound is the second biggest of the Fjords and can actually contain bigger species such as a resident pod of Bottlenose and the occasional whale of various species. (which we didn’t see) Lots of seals (which you’ll see in the pics) and some amazing scenery. There’s a ton of rain there annually so we lucked out in only having a few small patches of wetness.

We actually got to stay on the Fiordland Navigator on the sound overnight, down in steerage class basically. Unfortunately Niall wouldn’t increase our Titanic experience by leading any irish dancing. After getting all set up in our bunks we sailed down towards the Tasman Sea. The boat has its own Nature Guide narrating the trip and pointing out the various things we can see. Once we were down at a reasonably sheltered arm of the sound they broke out the small launches and sent off some parties then let the rest of us hop in the sea kayaks and have a paddle. 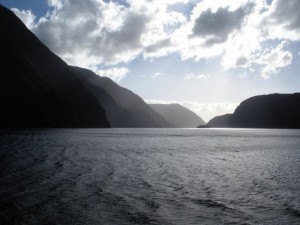 The Kayak trip was right up there with the one earlier in the trip for the amazing experiences of the trip. Towering cliffs covered with greenery with wisps of cloud running down the mountain, the only human sounds you heard once the big boat had stopped its engines was the splashing of paddles in the water. We could heard all sorts of bird calls ringing out through the rainforest over the backdrop of the waterfalls carrying away all the rain. Most of these waterfalls apparently stop within hours of the rain ending because there is very little soil for the water to filter through, it just slides off through the root farms and down the rock.

Once we were back on board the Navigator they served us a nice hot soup and set sail for the mouth of the Fjord and the seal colony on some of the barrier islands. Like most seals these ladies laze around all day before going out to hunt at night. There were a fair number of pups in amongst the moms but it was hard to see them given the rocking sea conditions. How far they go out really depends on sea conditions as this is a pretty wild sea coast. Our photographer is back with us as I write this and he says they made it five miles out earlier in the week and even the crew were bouncing around taking photos since that’s so rare. For us it was wild enough that they didn’t take us much farther as the sea sick types were starting to turn green. 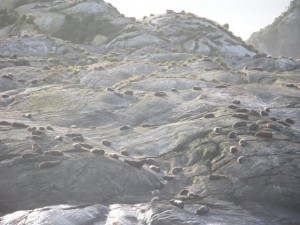 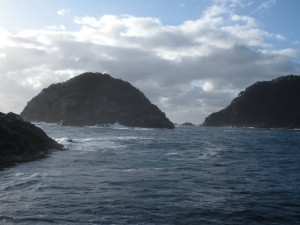 Once we were back into calmer water they served a delicious dinner, total smorg (salmon, lamb, beef, chicken etc) that had everyone stuffed (even before desert.) There was a short nature lecture after dinner then some general lazyness until bedtime. We were anchored in a very sheltered cove for the night so there wasn’t much roll but surprisingly I still heard a couple people comment on movement in the morning.

The next morning we woke to the sounds of the engines starting at 6:30 and dragged ourselves out of our less than spacious bunks and up for the first (provided) hot breakfast of the trip.  We took another side trip into one of the arms on the way back up to the wharf. This was probably my favourite place of the whole fjord trip. They shut off the engines and let us drift at the end of the long narrow channel. Morning mists and clouds drifted around the tallest of the peaks and slowly crept down the cliffs towards the water. The entire scene was eerily beautiful and will no doubt linger with me the rest of my life.

The rest of the day was kind of a blur of travel as we travelled across the middle of the southern tip of the island and made a couple short stops in some tiny towns. We travelled briefly between the towns of Gore and Clinton on what has been dubbed the “presidential highway” then on to the town of Naseby. The entire drive was a study in how quickly the geography of New Zealand can change because in five hours we progressed from the fjordland inlets, across the lake, fields of rolling green farmland and orchards, up into more arid pastureland and then finally into our current formerly gold mining area with a few sheep farms. We also snagged a truly abysmal lunch that’s probably still sitting in my stomach radiating evil. Imagine a really shady Korean convenience store from downtown in a big city, then plop it down in the middle of nowhere and have that be your only source for a lunch stop. My choice was a pork sandwich that was beyond questionable, poor Niall ordered a chicken Panini then watched as they stuck it in the microwave instead of actually cooking it. Ungrilled Panini is far from pleasant, especially when it’s soggy from the Micro. They had a full kitchen as well since they offered burgers, but given how revolting the burgers looked for those who ordered them perhaps we should be happy. 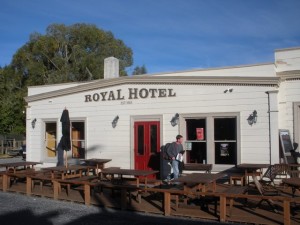 Once in Naseby we checked in at the Royal Motel (not as advertised :p ) and went to the local curling rink which has somehow become a tourist attraction as we piled off the bus. I guess it helps them keep the place running as it has year round ice and that must get expensive at times in the summer here. I showed most of my bus mates how to do things and even had a strategy discussion later over dinner. Everyone seemed to enjoy it and it’s kind of fun to say I’ve curled in New Zealand. There isn’t much else here in Naseby so we settled down for a dinner and then a few beers, enjoying the massive rarity of free wifi until the owner turned it off, probably fed up that we weren’t going to bed. Unfortunately while I uploaded a bunch of older photos, I didn’t get this blog post up before it went down.