Getting out of Sydney was a massive trial. My bus didn’t leave Sydney until six in the evening and by the time we were actually moving it was quite full. The time of course meant we were catching the tail end of rush hour traffic as we were trying to cross the harbour bridge and go north out of the city. The bus itself made this about 30 times worse as it had incredibly hard brakes and a terrible transmission. Any time the driver shifted gears there was a terrible noise and a thud as if we’d driven off a 5 foot ledge. Given my back was already sore things quickly got unpleasant. Thankfully Newcastle is only about 2.5 hours up the coast from Sydney and things got a bit better once we were on the motorway, but I really pity the poor people going all the way to Brisbane on that thing.

Unfortunately for me, the jackass driver really slammed my bag down putting it in and by the time I got to Newcastle my travel shampoo container had emptied and leaked all over my toiletries and parts of my bag. The scent of the shampoo is still lingering on me the next day. My roomies commented on how they thought they had a girl moving in. For extra entertainment value, I cleaned so much shampoo out of my shower kit that bubbles started streaming up through the bathroom floor grate. I’m sure everyone loved having to jump foam to get to the toilet later on. It also got all over my contact lens case and despite how careful I was to wash everything putting my eyes in this morning was an exercise in pain.

I was actually mixed up with my order of things earlier and my current hostel is in an old gentleman’s club here in Newcastle. Gentleman’s club of the port and cigars type, not the pole dancer variety. As a common room it has the old ballroom filled with wood panelling and leather club chairs, a pool table, foosball table and an old piano. It’s funny but for whatever reason this is kind of my image of a neat hostel: odd old building with character nestled near the beach and parks. The first night was mostly just getting in and sleeping, but before I even really had a chance to get up and around this morning I got a flock of new roomies on the train. One of whom definitely continues the wacky roommate roulette I’ve been having. He’s an 83 year old American ex-pat who’s been living in Australia for 40 years. He’s quite deaf and spends most of his time asking questions that he never quite seems to hear the answer to. He seems to be on a last tour of Australia before he goes home for a month to Perth. After that he’s relocating to the states to live with his daughter so she can give him extra care in the years ahead. It’s quite sad really, he clearly loves this country but you sort of get the feeling talking to him that this tour is mostly for show. He didn’t seem to leave the hostel today and he’s only spending a day or two here before going on to Brisbane and flying home. Judging by the fact that as I write this it’s 7:30 local and he’s already in bed I suspect he’s just not up to the demands of travelling rough anymore.

Weather definitely turned for the worse today though, strong showers on and off most of the morning but I kind of felt as if I’d get stuck indoors all day if I didn’t find something to do. One of the recommended things in my guidebook as well as on the activity board here was to check out the free Blackbutt Reserve (park) here. The hostel even has printed instructions on how to get there so I grabbed and map and set out. It’s a rainforest preserve, seemingly in the middle of a few of the small townships around here and just outside the main city of Newcastle. The trees were tall and gorgeous and once you got into the middle of the reserve you got no road noise either. It was very different for a Canadian boy to be suddenly deafened and look over and see a parrot, or to see a cacophonous flock of wild cockatoos flying across the path ahead of you. I ended up doing about 4kms of the various hiking paths before heading over to the wildlife refuge in time for the special events.

Walking around the outer exhibits there were emus and kangaroos, though the roos were mostly hiding from the still drizzling rain. I’m sure I’ll see lots as I get farther out into the country though. Following the path through the trees I got to see a large selection of Australian birds (from tiny finches up to parrots as well as the odd peacock.) There were also some very lazy wombats and a native aussie monitor lizard. Of course the highlight for me were the Koalas, I spent forever watching them in the trees, but at the appointed time (and for the steal of a price of $3.50) I got to get up close and cuddle two of them. They were so incredibly soft and fuzzy, very much like the teddy bears they so resemble. Definitely the highlight of the Aussie portion of the trip so far. 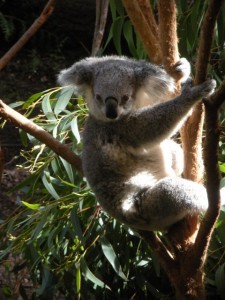 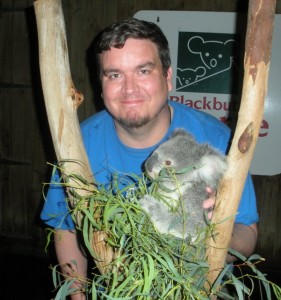 Tomorrow I’m signed up for a Hunter Valley wine tour and given the region produces some of my favourite Shiraz’s I’m sure I’ll love every second. The day after somewhat depends on whether I manage to finangle an RCI exchange from dad since that will likely determine how fast I have to go up the coast, but if it’s not raining I’ll probably stay here another day and explore the many beaches. It’s just a little dismal to be doing that given the current gloomy cloud and whatnot. Still, if the sun does break out the hostel has free boogie board rentals (and cheap surfboards, but I should probably take a lesson before trying that.)