I guess I was lucky until now. I haven’t run into a serious snorer, just the usual gentle ones. I know I can’t talk, between asthma and allergies sometimes I’m honking, but I know I’ve never been as bad as this guy, because I can’t sleep through that level of noise. This guy was an absolutely epic snorer, imagine your ipod set to about 90% volume coming through your earbuds and that’s the volume this guy had from the bed above me. Of course it wasn’t even a nice rhythmic pattern either, instead the poor guy just got louder and louder until he made a choking sound and reset. I hope he’s seen a doctor. Eventually the French guy in the bed opposite gave up and went out to the common area with his duvet. It was probably about 4AM before I finally drifted off from exhaustion during one of his rare quiet spells.

My second full day in Newcastle meant it was time for a full day wine tour. There were five of us total from the YHA boarding the bus at the start, but after a few stops we had a full-ish bus headed up into the Hunter Valley region. They weren’t kidding when they said full day tour as we left at 9 and didn’t return until 6:30.

The Hunter Valley region produces some really flavourful Shiraz (and Aussie Shiraz is my favourite) so I was really looking forward to trying some of the local products. I was less familiar with the white varietals that most places really seemed to like, but was pleasantly surprised. My only complaint is that all the wineries we visited were smaller places that don’t export to Canada (or even sell in stores period) so I won’t be tasting any of them again anytime soon.  We did pass Lindemans so I’ve seen the vines that my favourite Shiraz comes from even if I didn’t get to taste some of the good stuff.

Taking the wine bus was definitely the right move as we ended up getting special group tasting menus at most of the places that provided more than the usual couple tastes. One particularly good place even sent us off with 8 different wines and ports provided, a few of the girls on the bus were more than a bit tipsy after that one. Overall my favourite was probably the first place we visited, a vineyard called Oakvale where, once she found out I was the big Shiraz fan on the bus, the hostess poured me large samples of their older vintages. I can see why she didn’t give them to everyone. For one they’re expensive. Mostly though, they’re very spicy flavourful bottles that most of the people on my bus would have discarded after a sip. 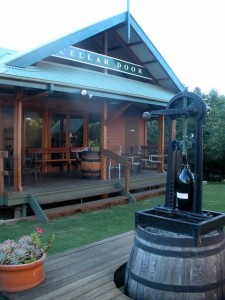 I seemed to get stuck on a bus full of sweet white fans. I don’t pretend to be a wine expert, but when your favourite wine on the tour was a mega-oaked chardonnay I don’t want to see them waste good stuff on you. The stuff smelled foul and even after forcing myself to take a sip I couldn’t see why they put a label on it. The only thing worse on the tour was something called Dragon’s Breath from a winery that also makes liqueurs. It was as you might expect a chilli pepper infusion, but it was chilis infused into butterscotch schnapps. Incredibly foul, syrupy sweet then a chilli aftertaste that absolutely abused the palette. It was a good thing we were hitting the lunch stop next. One of the other nice things about the wineries is that most of them gave us a sample of a port or desert wine. Some of these were kind of afterthoughts, but two of the producers actually took serious pride (and financial interest) in producing a top quality one. I got to try a fantastically mellow tawny and a 35 year old muscat that just made you melt into your shoes. 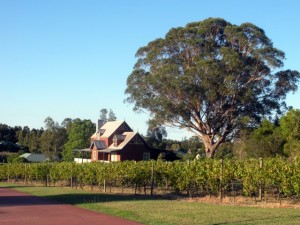 Two of the other stops on the tour were nice as well. A stop at a chocolatier was pretty nice, but they really only gave us a plate of their mass market stuff. It would have been nice to sample a piece or two of their high end truffles. The better non-wine stop was at the smelly cheese shop where they plied us with goat’s cheese, flavoured fetas and yoghurt cheeses and a fantastic fromage frais/gorgonzola spread that blew my mind. Unfortunately since the next day was a travel day I wasn’t too keen on having to eat it all that night and I didn’t buy any. I’m still regretting it.

Between the lack of sleep the previous night and the rather exuberant number of samples poured I was actually quite feeling the wine by the time the tour ended. I had to be up reasonably early to catch the bus out of town a little after 9AM as well, so I polished off some leftovers and curled up to watch a movie with some of the other people. Thankfully the bedroom was quieter that night.

The next morning I was woken up by our very own grandpa joe at roughly ten to six as he puttered around the room muttering to himself and occasionally swearing. Yesterday’s comments were on the nose as I really don’t know if this fellow should be doing this kind of trip. One of the staff told me that when doing his laundry the day before he’d put all his clothes in a dryer with some soap and done a full cycle before coming to complain that the “machine wasn’t working.” Talking to one of the women from the wine trip at the bus stop later she’d noticed him as well and apparently at breakfast he’d asked her what time it was, and when she replied 8 he asked, “in the morning?” When she asked what he’d done so far he again said he’d really only left the hostel to get a bottle of milk the day before. It really seems like he should have just picked one destination he liked and spent his money for a nice couple weeks there in a hotel rather than spending all the money touring the hostels of Australia and nothing else.

This morning I hopped the bus to Port Macquarie which turned out to be a nice little seaside town and a relaxed little hostel. I’m booked on a sunset fish and chips cruise tomorrow night which should be fantastic as it’s apparently run on an authentic Chinese junk. I suspect tomorrow will just be a lazy beach day if the weather holds since I haven’t gotten to do that in a while. Easter holidays have begun for a lot of kids here so the next two weeks may be a bit more expensive or difficult to get around. I probably should have booked more in advance as a result, but I’ve really enjoyed only booking 2 days ahead or so so far as I decided what I want to do. Once I get to the Brisbane area that will have to change a little bit though as I want to book some dive training and perhaps a sailing trip. Keeping to the budget is getting tough as I’d kill to be able to do some travelling that didn’t involve a bus and have a nice comfy room to myself at a hotel, even for a night or two. Thus far though, my only complaint about this hostel is that Creed appears to be one of the 6 albums on shuffle in the common room… ick.