I awoke Wednesday morning to the endless screeching of lorikeets directly outside my bedroom window. It was 5:00AM. I eventually managed to drift off for another little bit when they quieted down, but that was likely only because the rain was starting… rain that would hit us on and off for the entire day.

The pickup for the transfer over to the barge dock was at the lovely time of 7:20 so I was up at 6 something for the third consecutive day. Grey skies drizzled casually at random intervals as we circled the town picking up an assortment of day trippers and overnighters before finally opening up and pouring just as we were to board the ferry barge. Needless to say everyone crammed into the tiny indoor lounge rather than sitting on deck and the only one impressed was the ship’s cat as she had plenty of people to inspect. Once we got over to the far side we were steered to our respective giant four wheel drive coaches.

Fraser Island is an island almost entirely made of sand (the largest such place in the world) and has near zilch in the way of paved roads, usually the best you can hope for are some traction blocks on the nastier hills. A 4WD is essential on the island. Many people either join a group that packs into smaller suv style ones and do the camping thing, or do a larger bus style guided tour that does a day trip or has an overnight stay at one of the two bigger resorts remaining on the island. Since my friends Chris and Jodi had a good experience with the Fraser Explorer guided tours I decided to give them a shot, especially as the weather was already looking questionable when I booked.

The tour actually started with a speed run across the island to the resort to pick up the rest of our crew arriving from the other boat over from Rainbow Beach. Friends who have been here before commented on how they got stuck on some of those roads due to soft sand. We had the opposite problem, wet packed sand from weeks of rain with massive ruts that set the cabin swaying dramatically and had the guide warning us to not hit our heads and break “his windows.” Most of us took advantage of this to grab some water and a bathroom break and put on our swimsuits. While we were there our guide Graham checked the weather and saw that the southern half of the island didn’t look like it would be seeing sun any time soon so he suggested the first of what would eventually be 20 odd itinerary changes for us. Instead of a 5+km walk in a monsoon-like downpour we instead started the day 2 itinerary on the beach.

Much like Daytona and some other places in the states, cars are allowed on the beach there. Unlike those places, it’s used as the main highway for the island with a speed limit of 80km/h in most places (lowered from 100 after a wave flipped a car and killed some tourists according to Wikipedia.) Adding to the fun is the fact that it’s also used as the landing strip for rangers and scenic flights so all vehicles have to yield to planes as well. Our beast of a bus tore up the sand and through various creeks in no time, only slowing when the rain hit an absolute blinding level in patches as it mixed with sea spray. We kept heading north, following the tempting glimpses of blue sky in the distance. Eventually we arrived at the Champagne Pools, small rock enclosed lagoons constantly being refilled with champagne bubbles of wave action. These are apparently the only safe places to swim in the ocean on the island. The super fun reason? Active fish breeding grounds and a quick, steep drop off mean the coast of the island is shark central. Combined with heavy riptides, going out past knee depth is asking to die. Apparently Tiger and Mako are often seen there, but Hammerheads, Bull and Black Tips as well… with Great White sightings during whale calving season. Fun stuff! At least the pools were nice… (Video later of them) 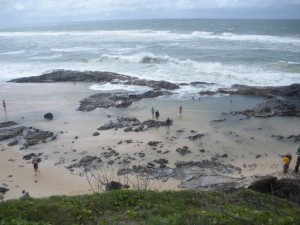 From the pools we headed south to one of the few rock outcroppings on the island, Indian Head. Named by Cook for the natives he saw on it while passing, the mount has great views. The wind was howling up to 75kph while we were up there, so unfortunately the sea was too rough to see any sharks or rays, but we still got a great view of the island interior. The wind was so strong that it was difficult to stand straight, but of course some morons felt the need to climb out past the collapsing cliff warning and hang above a 90m drop. Further south we had a photo stop at the Pinnacle Coloured Sands which are sand cliff formations of many different colours. Sadly the lack of sun kept the camera from really capturing them, but they were quite pretty. By then it was 1:30 and we were all clamouring for a lunch stop so we headed back to the resort. 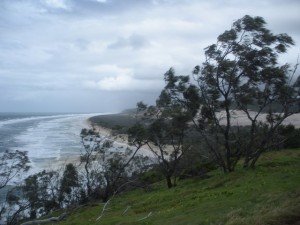 After lunch the weather had (sort of) improved on the south end of the island so we decided to do the long walk with a swim in the middle. This one was to Waddy Lake, a barrage lake created by a sand blow cutting off a stream and forming it into a lake. It was a roughly 2.5km hike each way, with a lovely swim in the middle. Coming in via the sand blow is quite wild as you starting walk through what seems like a patch of desert in the middle of the rainforest. You wouldn’t even know the lake was there if you weren’t told where to look, but sure enough, nestled next to the forest is a dark green lake full of catfish and turtles (and though none of us saw any… apparently some freshwater eels.) It was a lovely refreshing swim after the walk, but of course the rain came back and forced us to run scurrying to protect our gear. It was almost 5 by the time everyone was back at the bus, and darkness falls swiftly, especially hugging the east coast of the island, so we headed back to the resort. Still, we’d gotten to see far more of the island than I’d feared first thing that morning. 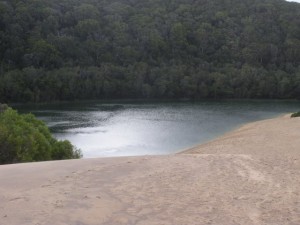 Upon reaching the resort we were assigned rooms. I’d signed up for a quad, but I guess I was the 5th guy to sign up for a quad because I ended up in a room by myself. Not your typical hostel room either, but what had clearly once been one of the nicer resort rooms, large with a kitchenette and ensuite. Instead of the two queen size it once likely had there were four singles. I actually sat there a while assuming someone else would come in, but when no one did I just had a laugh and hopped in the shower, finally feeling fully warm again for the first time since bed that morning. Dinner was an Aussie buffet and I swapped travel stories with an older British couple and two Norwegian girls who spoke shockingly good English. Malcolm even gave me a glass and a half of wine, which combined with all the swimming and the early mornings meant I was ready to go to bed and mellow out when they closed the main hall.

The next morning I actually had good intentions to get up and see the sunrise over the pacific, but upon waking up saw heavy cloud and a persistent drizzle so I went back to bed until 6:30. The one person who decided to try reported having no luck seeing the sun. After my first hot breakfast in quite a while, we set out to do the things we’d missed the day before. First up was a swim/wade in Eli Creek which runs down from a sand spring to the open ocean and is the biggest water outlet on the ocean side of the island. This was followed by a trip to the 1930s shipwreck Maheno not far away. Both places made for some fun camera and video shots though again some more sun would have been nice. We also saw a few of the local dingoes, reported to be one of the purest strains of them since dogs are not allowed on the island. Unfortunately we were never in a place where we could stop and take photos from a distance, but it was still very neat to see them. 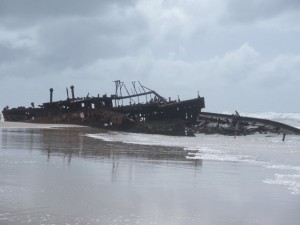 After an early early lunch, we went for a walk in the rainforest along a beautifully clear stream. Endemic trees not too different from redwoods tower all along the path and the canopy is quite dense making it spooky in spots. The driver quite carefully saved his spider and snake lecture until after the walk, during which he revealed that we’d passed funnel web spiders as often as every 1.5m along the path. We also learned the rather unwelcome fact that the island actually does have Death Adders and Tai-pans… fun stuff again! Our last stop before heading back to the barge was Lake McKenzie a beautiful big perched lake up in the hills. Almost everyone had a swim here, but the wind was so cold that it eventually drove everyone back to the bus a bit early, not to the surprise of Graham. The last treat of the trip ended up being the sunset as we got close to mooring back in Hervey Bay. 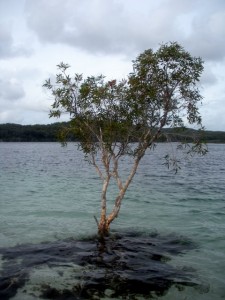 So tonight I’m back at the Friendly Hostel, far too wiped to cook so I grabbed a pizza from the cheap locally recommended pizzeria and I’m going to settle down and probably fall asleep watching a movie once I post this entry. Thus far I’m alone in the three person room tonight as well, though it sounds like tomorrow night it will be packed as it took checking 5 hostels before I found a room for tomorrow night’s stop. Thankfully it’s just a short layover before I keep heading to the Whitsunday Islands. 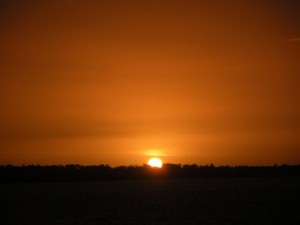 Antipodean Adventure, Nature, Things that can kill you