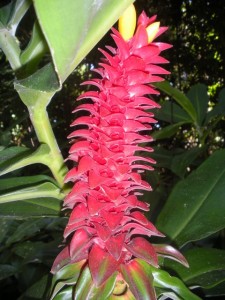 Coming down off Cape Tribulation I was finally set up with money again and was able to do the croc cruise on the Daintree river. I’d lingered a bit over my free breakfast in the bistro and that combined with a very slow cement mixer coming down the winding roads meant I wasn’t on the cable ferry across until 9:30 when the tour started. I decided I still wanted to do it as it had been recommended and was a good deal so I went to register for the 11:00 even though it would minimize the time I had to spend on the tablelands later in the day. Thankfully when I said it was just me she told me I could make it but I’d have to run then called the boat to get them to wait a couple minutes.

I’m glad I made the effort. The river itself was gorgeous, dark and mysterious looking even in bright sunlight. It a very African Queen vibe to it despite the sun and when we passed through a narrow passage between the riverbank and a large island it was easy to imagine spears suddenly flying from unfriendly natives in the jungle. The banks themselves were mostly mangroves of the saltwater variety since even that far up the river there was a 2 meter tide from the ocean. As a result the whole area is happy times for crocodiles.

Our first encounter was with a small (by the guide’s standards anyway) female that he estimated was about 30 years old. She’s apparently very reliably sunning herself in one of two nearby places so they always start the trip with her. She was quite clearly visible, laying there and slowly opening and closing her mouth to control temperature. Just as we were about to head out she flopped closer to the water in preparation to go for a swim and gave us a few nice photos. The guide himself was the owner of the business, a fantastically knowledgeable guy who’s been working the river for 30 something years. Every time we’d hear a birdcall or see a new type of bird or plant he’d give us the name and some pertinent details. He also had a fantastic eye for spotting the camouflaged napping crocs, usually having to point out repeatedly to the rest of us where they were in the distance. After the female we stumbled across a smaller juvenile just scampering out of the water after a swim. We got a chance to see how they moved as the croc went to hide at the high tide mark, still a bit small to survive a serious challenge from a real bull. Our next step down the croc size ladder was a true youngster. Slim and about 2 feet long, the roughly 16 month old specimen looked like something one might see in a tropical aquarium but was in fact a croc keeping a wary eye on us. They’re very vulnerable until they get bigger, often eaten by other young crocs, the big ones and the occasional bull shark that hunts in the river as well. The last and best sight for us was Nelson the one armed (of course) bull croc at about 4 meters in length. He was truly massive, laying across the bank and clearly watching every one of us as the boat edged in. I was already pretty convinced that meeting one of these while swimming or walking near water was a bad thing, seeing one from 10 meters away was just a little extra reinforcement of how primeval looking and scary they are. Fascinating, but scary. 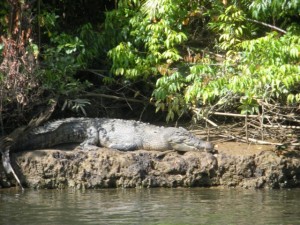 I’d named my car Gertie because at first I was told it was a Hyundai Getz and for some reason Gertie the Getz popped into my head. Turns out it’s the new version called the i30, but Gertie stuck. She’s tiny, white and has about as much power as a modern lawn tractor but she’s given me a bit of independence in discovering some of the other neat things around Cairns. Next up was the Atherton Tablelands, a massive plateau just in from the coast. It’s basically a series of small towns, waterfalls and great views of a more rugged Australia in one direction and rolling hills out to the sea in the other. Gertie struggled to get up the winding switchback road, but once up there we cruised together and saw the sights. After a quick stop at a tourist office I set myself up with an itinerary of hikes and waterfalls and the like that would hopefully get me down off the mount shortly before dark and back in Cairns in time to get a bed and do some planning for the last few days of the trip.  My first stop was Mount Hypipamee National Park to see a large volcanic gas vent crater and Dinner Falls nearby. I had been told it was a nice hike, which it was but it was only about 15 minutes total to visit both sites. Likewise with the curtain fig, a giant strangler fig that has created a curtain after its host tree fell partially down before the process was complete. I also did a short road circuit called the waterfall trail that stopped at three different sets of falls. In the end I didn’t do any longer hikes, but the sheer volume of shorter ones had my legs (still stiff from using diving muscles) whining a bit. 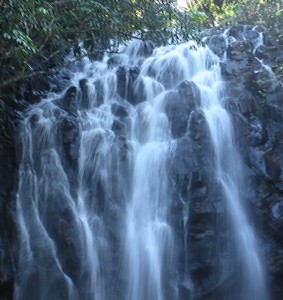 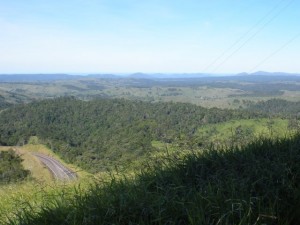 The road down from the tableland was a lot more fun than the road up since Gertie could handle it a lot better. I really really wish I had my Mazda over here though, it would be a blast on that road. The route down had a much longer section of heavy winding so it was getting quite dark before I pulled back in at my old Cairns hostel. Thankfully they had room so I booked in, grabbed a quickie kebab for dinner then settled in to plan.

Sadly Uluru would likely cost me 1200AUD for a short three day trip. Much as I want to see it, I think that’s money that’s better spent in Europe this summer. Melbourne sadly suffered the same fate which is rather crushing to me, I’d really wanted to check it out as I’ve heard it’s a fantastic city. I think the problem is the current roller coaster in gas prices  ending the really good seat sales over here for a bit. I’ve instead decided that next time I visit Australia I will just start my journey in Melbourne and head west and up to Uluru first before spending any time on the east coast. It’s sad, but I don’t want to be sitting in Prague in August wishing I’d saved that money. Instead I’m going to head back to Sydney and do a couple of the day trips I missed last time.