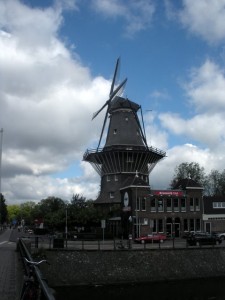 Much to my relief the weather improved the next day and I was able to rent a bicycle to do a proper tour of the city getting around the way the locals do. Thankfully the hostel had a bike rental service for 11 euro a day that included a couple ways of locking the bike and a reasonably comfortable seat. The bike rental guy was a neat old dude who was originally from Nigeria but had lived in Amsterdam for 30 years. He asked where I was from and upon learning that I was Canadian proceeded to tell me how much he respected Canadians and so on. As he was picking out my bike he started to tell me that his favourite Canadian was Celine Dion and just what was she doing these days anyway? I managed to refrain from saying “having babies with her grandpa,” not wanting to get a bike that would collapse and send me headfirst into a canal. Oddly enough this turned out to be a day of people glad that I was Canadian.

I actually originally just planned to explore a few sights I’d missed with the bike then head back for an earlyish night (my train journey to Prague was the next morning, 13 hours long and starting early) but I actually ended up riding across most of the city. I checked out a few of the sights I’d caught glimpses of from my trams and trains first, including a few rows of beautiful canal houses and my one and only Dutch windmill. Probably my favourite new sights were the gorgeous Vondelpark, a massive city park that reminded me a lot of Central park and which was almost as busy with natives and tourists enjoying diverse activities. My absolute favourite mingling with the locals moment was catching a street market that stretched for quite a few blocks. This was of course, time to sample local foods again so in addition to some delicious gouda and some slightly odd but tasty berries I tried some Porfetjes (will probably forget to check the spelling on this so forgive me) which were mini sweet pancakes served with a pat of butter and some icing sugar. Absolutely delicious. While sitting and eating them I was asked where I got them by a dutch girl about my age, when she heard my voice she asked if I was Canadian, when I said yes I got a hug. She said her grandfather told her to hug any Canadian she met because without us she wouldn’t be around. He’d apparently been in a camp that was due to be shipped east just as the canucks liberated it. As for the market I was hesitant to buy anything else due to the long ride I had ahead of me, but after I saw some freshly made Stropwafles (super tasty thing wafflecone-ish cookies sandwiched around brown sugar syrup) I gave in and bought some, along with some fresh grapes and a crusty baguette to go with the Pesto infused gouda I’d bought the night before. Some juryrigging with purloined plastic bags made me a basket of sorts on the bike and off I went. 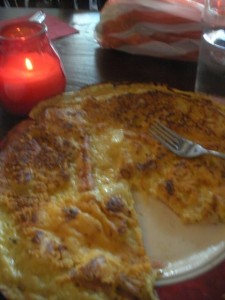 I ended up retracing some steps, crossing the museumplein again and getting a change to appreciate the Rijksmuseum with a more pleasant coloured backdrop. Back near Anne Frank House I rode around more of what used to be the city’s jewish neighbourhood before stopping for a proper (full sized) dutch pancake at a place that had a lineup out the door. They didn’t have an apple cinnamon one, or rather they did but it involved apples, cinnamon ice cream whipped cream and cherries and I didn’t really think I needed that as my only real meal of the day. Instead I had one with Ham and Gouda that was even better than the Giant Ham and Cheese back home at the pancake house. Despite having ridden across most of the city by that point I felt like I had to work off the pancake so I rode back to the central station and decided to check out the Newmarket and part of the red light district I had missed. This being Friday it was already packed with people in for a long weekend of debauchery. While navigating one narrow alley in hopes of getting a shot of the Oude Kerk that wasn’t wreathed in rain I had the most comprehensively icky moment of my stay in Amsterdam when two girls leaning out their doors were chatting and I overheard one of them excitedly explaining (while holding her belly) that she’d just felt her baby move. Yikes, that’s going to be a fun conversation in a few years when the kid asks what mommy was doing when he/she came along. After that lovely moment I sat down on a bench for a minute and was joined by a talkative homeless dude originally from south Africa, he asked if I had a light and started talking to me about Canada once he found out where I was from. He started talking about how he respected Canada, unlike the “damned Americans.” No idea about his views on Celine though. J Once I said goodbye I took a long zigzag back along the reclaimed docklands area and arrived back at the hostel quite tired. Sadly I’m realizing I didn’t take a picture of my bike as it was such a cheery bright orange and old fashioned shape that it brought to mind Pee Wee’s red bike in PWBA. After some email catchup while I still have free wifi I went out to the nearby park and picnicked with my goodies before calling it an early night.

Prague day dawned early, 6:30 again to be safe since I had no idea how long it would take me to get to Amsterdam Centraal station that early in the morning as I was taking the train from the “murderport.” It turned out to not matter since my first train actually came right back through Muiderport so I might as well have waited, but alas I had no idea. Thankfully there’s only two changes today but it is a long trip as I had to get to the edge of Holland, board a train for Berlin, then swap in Berlin’s massive station for Prague. Waiting for my slightly delayed Prague bound train I ended up sampling something called Currywurst as lunch, it turned out to be quite the experience. First they grab a boiled very german looking white sausage then insert it into a tube in the top of what looks like a drink machine. The server then presses a button, the machine makes a horrible noise and spits out chunks of chopped sausage. She then shakes a salty powder with a slight hint of curry flavouring over the sausage before drowning it in barbecue sauce and serving it with a tiny wooden fork. As a gastronomic experiment it was interesting, but I don’t think I’d dive in again. I may return to Berlin to visit (haven’t decided yet) but I saw a strangely large amount from the train itself. The victory column came into view nicely with the Brandenburg gate semi obscured in the background. On the way out of town a large section of the Berlin wall with two boarded up guard towers at a former crossing point right next to the tracks. Somewhat surreal, but also making me feel very old as two French girls sitting nearby  said “I wonder what that is?” as we passed it. Whole new generation of people old enough to be travelling around Europe alone that were born after the fall of the soviet union… yikes. The rails have gotten markedly worse as we’ve passed into the former east as well, they’re fine for large stretches of time then all of  a sudden you’re getting bounced around like it’s a stagecoach as it seems like you get to a section that hasn’t been completely redone since reunification. On the other hand, first class on the trains today has been nice with a spacious Hogwarts express looking cabin on the first long train and a nearly empty first class car in the second. I’m glad for the latter as I’m sitting in the stupid crossover point between the seats facing backwards and forward. Great if you know the person across from you, kinda awkward if you’re sharing legroom and basically forced to play footsie with someone you’ve never met. Hoping we don’t gain a ton of first class folks at Dresden. As I write this it’s actually gotten emptier as the two French girls were kicked out for not having a first class ticket. Not that second class looks too bad, it’s just nice to have legroom and be able to put my bag somewhere I can see it even if everything valuable is in my carry on backpack. Sadly I’ve got another 4 hours or so on this train as I write this so I suspect I may finish a third book for the day despite the occasional mininap.

Passing Konigstein Castle it looked gorgeous and must have a hell of a view (upon a Wikipedia check, wow… may have to stop there if I come back down the same line)

Later update: Actually getting into prague turned into a nightmare. The train manager came on the intercom and quite clearly said, sorry for the delay, we’ll shortly be arriving in Prague Central. So when the Train stopped a few minutes later I got off, thinking it was Prague central. The sign said Praha somethingelse, but since Central in Berlin had translated to Hauptbanhof I wasn’t too worried. I should have been. I ended up stuck in a far from mainline station where everything was closed and no Czech currency. Apparently prague isn’t modern enough for the public transit ticket dispensers to take credit cards either so I went out, took some money out, tracked down a mcdonalds and bought a drink just to get metro money. Not super impressed. Neither was I impressed by the hostel’s directions which due to an unclear section sent me in the completely wrong direction twice until I saw a nice cabbie.  Since I hadn’t gotten off at the right station I hadn’t been able to grab a proper city map from a tourist info booth or anything either and the Let’s Go book map is admittedly somewhat small given Prague is one of 40 odd cities covered. Still, things were forgiven once I got here as this hostel is essentially a 4 star hotel that happens to have 2 bunk beds in some of the rooms. I have a gorgeous large bathroom with a waterfall shower that felt amazing after the long ride and met a few guys from the states that took me along with them to an Absinthe bar for a quick drink before they went on to some underground club and I came back for the aforementioned shower and sleep. The hostel/hotel itself has a pretty loud club built into the lobby but the soundproofing in here is so good that I can’t hear a thing despite being directly above it. Time for sleep though, going to get up and catch the free walking tour tomorrow before doing some solo exploring.