Split was everything it was promised to be, a little slice of vintage feeling Mediterranean city. I got there fairly late and again had problems finding my hostel, this time because there was no street sign and the sign for the hostel was an etched piece of glass the size of a cue card invisible in the falling darkness. The broken A/C had eventually led to temps that had to be above +40 on the train, with the laptop eventually overheating to the point where I couldn’t use it anymore. I didn’t exactly smell pretty and it had been a long day by that point so I had a shower and a bit of a rest before taking a night time walk around and down to the water.

When morning came it was time for some more proper exploring. The town itself build up around Diocletian’s palace, built for the Roman Emperor’s retirement years right on the Dalmatian coast. In the years since a bustling little city has grown around it, the core of which is built into and around the palace itself. Many of the ancient roman walls now house shops and tiny flats have been built incorporating various ancient walls. Later merchant “palaces” have also been built within the roman palace making for an interesting mishmash of architecture. The whole area is a UNESCO world heritage site and certainly deserves it, but it can be hard to see the impressiveness of the structure as a whole with so much of it hawking souvenirs or ice cream. 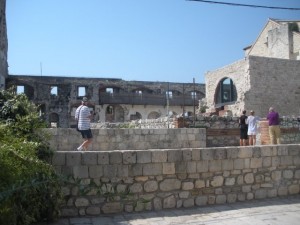 Just outside the palace is the large bay on which most of the town encroaches. I actually got a very Whitsundays vibe about it as it’s the center of a thriving party cruise trade around the islands. It’s also a busy ferry port with larger ferries crossing to Italy or sailing to Greece and smaller ones serving the offshore Croatian islands. If I come back I’ll definitely head out on a boat, but given the amount of time I want to spend in Italy and how long it will take to get out of here even a 2 day trip wasn’t a great idea. After spending some time in the local museum (mostly about the palace) I gave in to the sweltering temperatures and spent the rest of the afternoon at Split’s “famous sandy beach” conveniently near my hostel. It takes a lot of nerve to call that sand since it was a tiny stretch perhaps  50 paces wide of what could more accurately be described as gravel and mud, most of the rest of the beach area was a concrete breakwater. It was perfectly pleasant but I hope those people get a chance to see a proper sandy beach at some point in their lives. On the other hand even mud was a happy thing because apparently the coast is notorious for sea urchins and almost anywhere else it behooves you to wear rubbed water shoes when you’re swimming off the rocks. The bay itself was beautiful though, shallow out quite a ways with a resulting wave pattern so jumbled that you could never surf but you could float and be randomly swished around like inside a washing machine. The water was wonderfully warm and seemed especially salty and buoyant. It felt amazingly refreshing and I probably spent over an hour in my first time with a few shorter sessions as the afternoon wore on. I can now check the Adriatic off my “bodies of water I have been in” list.

Later that night I decided to treat myself to a nice dinner, but the Croatian people seemed to be obsessed with pizza and pasta (not helped by the large number of Italian tourists who cross) so finding something different was a little tough. Oddly enough my incredibly bubbly hostel host recommended a little bistro that specialized in Mexican and Indian. My hopes weren’t high but I was dying for something different that my diet the past week or so and Enchiladas fit the bill. Unsurprisingly they weren’t super spicy, but the flavour was nice, as was the strawberry Margarita I added on before realizing it was the equivalent of $8 cdn. It really never pays to not order beer over here. After returning to the hostel with a few beer from the supermarket I ended up watching old episodes of 30 rock with a couple of Canadians who were sharing my room before settling in to a fairly early night since it was a marathon train day the next day. 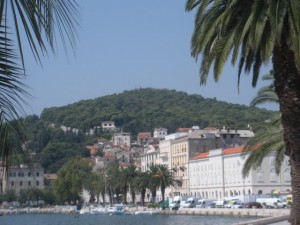 I really don’t understand the Croatian railway system. I’ve taken 4 different trains within Croatian borders now, all are daily scheduled trains so you think they’d understand the traffic patterns surrounding them but they’ve lost a mean of 48 minutes on  my journeys on them. I’m really not sure how one falls 70 minutes behind on a 6 hour journey with few stops and no catastrophic breakdowns. I’ve been warned by Chris/Jodi and others that Italy is just as bad, but at least in Italy if you miss a connection chances are there’s another train in no more than an hour. This afternoon trying to get out of here I hopped on my connection with only 5 minutes to spare despite having an 80 minute window by the schedule. Had I missed it I would have been waiting 8 hours for an overnight sleeper and would have been paying for a hostel room in Vienna that I wouldn’t be using. That said, I really loved the journey this time. Probably because I wasn’t in a heat induced coma with most of the shades drawn I noticed a lot more of the scenery this time. Sweeping mountain valleys, sharp peaks and quaint villages all featured in an incredibly varied landscape as we climbed quickly from the coast up into the central valleys of the country. Little towns blurred by the train (or crawled during our slow sections) yet everywhere there were unfinished buildings. Most of these were built of red cinderblock and most had the exterior walls done and often a slate roof as well but windows and doors were gaping holes into ruined interiors. In most cases it was clear they’d never been lived in. I’d put them down to houses that were abandoned during the strife around independence time and certainly some of them had decayed to a point where that makes sense, but others had clearly been built and abandoned quite recently, some even had scaffolding collapsing around them with plastic sheeting torn to shreds. It was quite the mystery and none of the Croats in my train car this time spoke English so I couldn’t even ask.

Overall I’ve really loved Croatia, it’s simply a great place to visit. The country is beautiful from Zagreb through the mountainous inner regions and the beautiful coast. The people themselves are much more happy and welcoming than some of the other Eastern European countries I’ve been in. The younger generation appears to be eager to learn English so making yourself understood is never too hard. Most importantly, though it has of course commercialized to some extent seeing a recognizable brand name is rare (outside of soft drinks of course) and though I did see a sign for a McDonalds on a train station wall I never actually came across any western fast food despite a fair bit of exploring. Better still, it’s cheap. Even living in hostel world I heard a few people talking while I was exploring and between lower prices and not being on the Euro they figured Split was half the price of some equivalent places in Greece. If you happen to be touring Europe and want a cheaper beachside or eastern European adventure I’d really recommend it (though I’d probably suggest grabbing one of the ferries from Italy if you can’t find a cheap flight… That’s what I would have done if I didn’t have a railpass to use. (and sadly none of these ferry companies honoured it like the Greek ones tend to.)

As I write this I’m actually watching a wedding under a big Marquee taking place outside a small station we’ve stopped at. People are dancing in traditional costumes and the bride (I think) is going absolutely wild with them. This really seems like a country where it would be a blast to pick up a Croat-English dictionary and just hit the road. Unfortunately it’s now been 10 minutes stopped here with no one getting on or off and another train also sitting right next to us doing the same so I’m wondering how long the delay will be this time. Likely just enough to keep me from getting to the hostel before the underground in Vienna shuts down for the night.**

*oh, and sadly… no I did not see a Dalmatian on the Dalmatian Coast so the Corgi in Wales is still the dog moment of the trip.

Europe, Summer 2011, Things that are hot