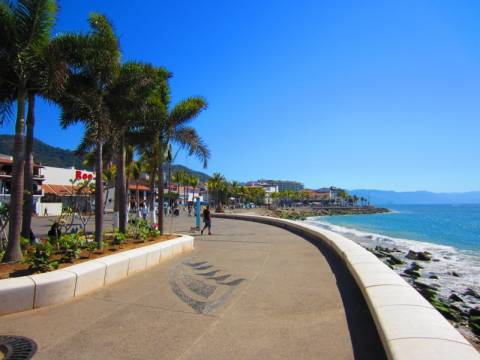 In 2002 Puerto Vallarta was hit by the edges of a fairly large hurricane. Though no one was killed a large chunk of the waterfront was severely damaged by the storm surge and the gorgeous malecon (seaside walkway area) had to be more or less rebuilt to be safe. Though it’s no longer new to the locals I was curious how the waterfront had changed compared to my memories from my first visit in the late 90s. The answer surprised me…

Yet I’d actually wondered if I was even going to get into PV proper during this visit. Once we’d all recovered from the lingering effects of the wedding our planning turned to maximizing our last couple days of vacation.  Eventually Chris, Jodi and I as well as old friend Geoff and his girlfriend Sarah were up for some exploration. Getting down to the old city was relatively simple. A walk up to the main drag and a short wait got us into the Marina Vallarta area where we sat at a bus stop in the shadow of three mammoth cruise ships to swap to a Centro bus downtown. All in all it takes about half an hour and makes staying out in Bucerias palatable even if you want to spend a lot more time downtown than we did.

Once we stumbled out to the coastline I was struck by a simultaneous sense of familiarity and confusion. Everything seemed much more concrete (both literally and figuratively) and what was familiar was still just different enough to seem wrong. The malecon itself was very very different. All the new concrete mostly served as a firmer sea wall to protect the ‘zona romantica’ from future storm surges. It’s all very beautiful though I miss the old tiles and some of the old store fronts. Happily in most ways it’s even better. The entire shorefront in this area is now a pedestrian only zone and being able to stroll leisurely along without having to dodge taxis and pickups full of militia or soldiers makes things a lot more relaxing. 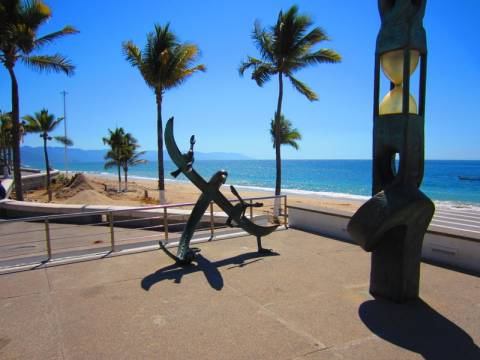 Public Art on the Malecon

Unfortunately I knew I was going to see a lot more americanization as well and sure enough almost every corner had some well known American brand be it Starbucks, McDonalds or Baskin-Robbins (or ScotiaBank amusingly enough.) Combined with a number of bars with themes/designs that seem to cater to the spring break crowd I think the new malecon has lost a bit of its old architectural/cultural spirit. On the other hand the public art is still fantastic, be it in bronze or sand. Many of the sculptures have a modernist bent to them and most have historical or nautical inspirations. The sand sculptures are intricate constructions and many featured political messages (and also almost universally have donation boxes and associated guilt-trip shouts.) 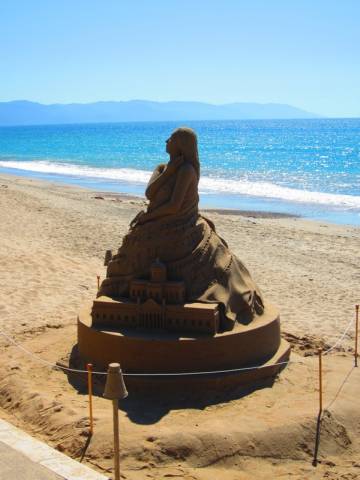 Sandcastles in the sand…

Surrounding the Malecon and highly visible in most directions there had also been massive condo development since my last visit. It seems as if an increasing number of North American and European ex-pats are living in PV these days including fairly large number of LGBT folks attracted to what some call the Latin American San Francisco. I can certainly see the attraction, especially if you head home during the summer months when the area can get unbearably hot for those of us used to colder climes. 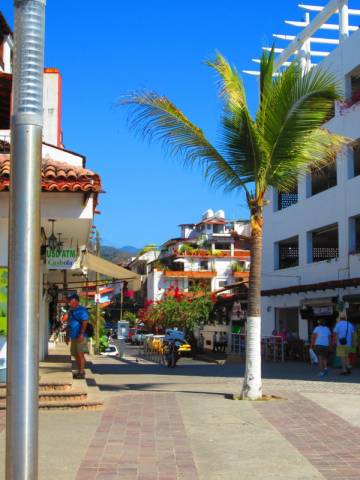 On our day in PV we ended up walking the length of the Malecon and down to the Boca del Cuale for Margaritas and Nachos. Given temps in the high 30s and a baby that was getting fussy I thought we did quite well though the drinks were an absolute necessity by then. After our snack at Restaurant Oscar we made our way up the island flea market. Other than the vendors hawking the usual nonsense Isla Cuale feels like a park. A number of open air restaurants and cafes sit by the riverside and pelicans are constantly zooming around the jungle-ish tree canopy that keeps out a lot of the city sounds. Most of the city  streetways pass overhead on bridges maintaining the atmosphere. Unfortunately given our late start and slow pace that was about all we had time for. If I head back again I will definitely spend more time in the zona romantic and seek out some of the back alleys and artsy things but this visit was a bit more dependent on baby stamina. 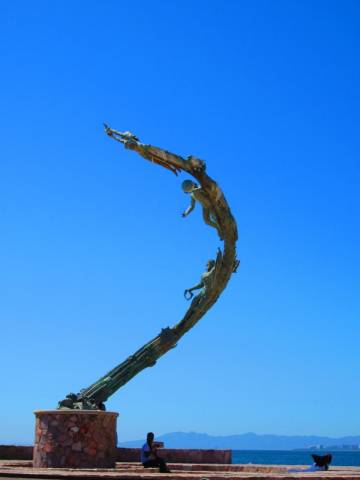 I realize that thus far in this travel narrative I’ve neglected to mention bus “entertainment.” Most often these folks are playing an instrument or singing and they are often but not always children. I think this was likely the peak in weirdness for this trip as on the way back to Bucerias we had several performances. There was a serious cultural barrier on the last group though as to us Canadians it seemed to solely consist of a lot of yelling. Two teens, one shorter and rotund the other older and rather bored looking clambered on board the bus at one of the main mall stops. Each wore facepaint reminiscent of a bad Mexican comedy show. Short round round would scream something in a shrill voice at the top of his lungs while occasionally battering a homemade drum.  The tall boy would answer in a loud monotone while looking around in boredom. We sat at the back of the bus all sharing rather mystified looks and honestly hoping each call and response would be the last. Finally they decided they’d subjected us to enough, jangled a money jar in everyone’s face and hopped off to scurry over to another bus. I’m sure it made more sense if you understood it but my limited amount of Spanish knowledge couldn’t keep up with the rapid fire shout ’singing?’

Sadly the next morning began our last full day.  I was fairly dedicated to the idea of using the last day as total relaxation. As usual I started with an early morning swim in the ocean, followed it up with a great breakfast (custom made chorizo omelette topped with salsa verde , a croissant and some pineapple cactus juice) I was really going to miss the place after a lovely week, I really wished  I was staying another. A second dive would have been nice, I would have loved to take a horseback ride up into the hills as well as I did back on my first PV visit. Still, I had no regrets about spending most of my last day on the beach and in the ocean. My only regret was choosing a beach chair so close to ‘Old Man Speedo’

I’d seen the guy around once or twice of course, it was hard to miss him. He was probably hovering in age somewhere around 70, though his ultra-bronzed, almost orange skin could easily just make him a sun ravaged 55. Seemingly his only goal while at the resort was to get everyone to notice how fit he was for his age. Truthfully he was pretty fit. The man was short-ish but his overall physique was quite toned and muscled though he unsurprisingly suffered from the sagginess of most older men. He honestly reminded me a fair bit of Jack Lalanne. I don’t want to sound as if I’m poking fun at this, in fact more power to him for being so fit at his age. What made him kind of pathetic was his desperate need for everyone to notice the fact that he was in shape. Every day he’d poured himself into a WAY too tight speedo and made his way down to the beach with his companion. Once there he’d pretty much refuse to sit down for any length of time, either standing near his wife’s palapa or pacing back and forth slowly along the beach nearby. If you were unlucky enough to be sitting in a row behind his beach chair (or really anywhere within eyesight) he’d always be in your line of vision. Even more pathetically he felt the need to constantly be flexing to keep things tight. He’d always have his arms slightly hulked out and his shoulders slightly crunched so you knew he was just constantly holding himself. Even if he went into the water it would be a slow strut, never going much over his knees and really just using it as an excuse to wet his torso again so he could glisten in the sunlight. It was easy to picture him some 50 years prior bulking up to make up for his diminutive stature and even now refusing to let that mental “I’m a big man now” picture go. That said… the dude is way healthier than me and will probably live 15 years longer (if skin cancer doesn’t get his Dale Winton-esque hide first.) If I was him thought I’d just enjoy it instead of feeling the need to preen for 4 hours a day on holiday.

After spending most of the day in and out of the water, reading my book and plowing through more or less every favourite frozen drink from the bar it was time to walk into town. Since it was our last night in Mexico and conveniently enough also the Mother of the bride’s birthday we walked to a beachfront seafood restaurant by the market where they’d prepared a long table for us with a view of the sunset. I ended up having a lovely but ridiculous meal of gargantuan pacific coast prawns, stuffed with cheese, wrapped in thick cut bacon then drenched in a creamy cheese sauce with a hint of spice. Washing it down was a margarita the size of a bucket. It was a very good thing that we walked back along the beach to work off some of the calories. During the meal we were serenaded by ‘Dave’ playing his guitar and singing along to backing tracks of mostly classic rock. He could play the guitar reasonably well, had a mediocre voice and a command of the lyrics that was… questionable. It wasn’t just his accent either, their were long sections of several songs where he clearly didn’t know the words and trying to understand his new interpretation of what they might be was often quite entertaining. Hotel California was a particularly adventurous performance and caused a few Eagles fans at the table physical pain. 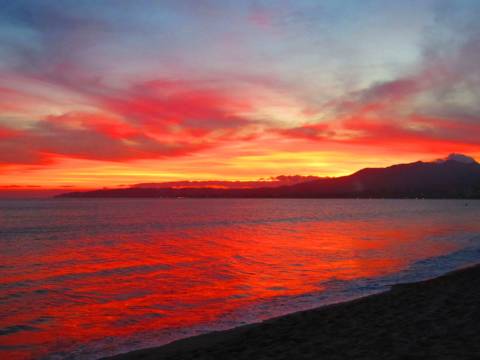 Sunset on the last night…

Sadly that was it… one last walk back along the beach. A few last drinks in the bar and a morning wakeup call to do final packing and head to the airport. In almost every way this was a great holiday. Old friends, new friends, ocean, drinks, food and fun. IT was particular welcome after working nine straight months at my new job without a holiday longer than a 3 day weekend. Oddly one of my biggest takeaways is that I’m old enough now to enjoy an all-inclusive a bit more than I used to. While I still likely wouldn’t do it more than one holiday in three it was a nice relaxing break from the ridiculously epic winter we had this year.

Previous Post: This is the rhythm of the night…