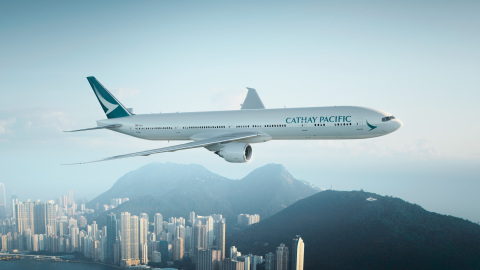 Arriving for an 8:45 departure to a mostly empty Richardson Airport and being able to leisurely go through security at my own pace was one of the last civilized things about the outbound leg of the journey actually that’s probably a bit strong, the first leg (YWG to YVR) wasn’t bad as I had a 2 person side of a row to myself. However, the next leg was the big hop… a twelve hour bounce from Vancouver to Hong Kong that I was happy I’d managed to snag on Cathay Pacific vs. an inferior airline…

…truth be told, it was still better than it could have been. The entertainment options were decent, the legroom adequate by modern airline standards and the plane itself on the newer side and not quite as noisy as the beat up old Air Canada plane I took on my last overseas trip back from rome. Unfortunately I’d been assigned a spot more or less at the back of the plane (only one row between me and the washrooms/kitchen prep area) on the outer aisle with the world’s most annoying seatmate in the middle. I got a bad vibe almost immediately from him as he simply stood next to me wanting to get in without even a gesture, and when I stood to let him in he immediately threw all of his junk on my seat and took roughly five minutes to get settled in as I kept having to dodge the flight attendants. Sadly things didn’t get any better when I sat down.

Now I get that I’m no one’s ideal seat neighbour on a plane. Though most of my ample frame fits in an airline seat well enough my shoulders are definitely too wide for more or less any compact seating arrangement (as anyone that’s sat next to me at GSAC can attest.) As a result I was at first quite happy that a relatively small asian man was next to me. That initial bad vibe was pretty immediately backed up though as my new friend dropped his tray table pre-taxi in order to spread out and read every newspaper he’d been able to grab from the front of the plane. He did not do as most people do on an aircraft and fold the paper so as to be able to read it within the confines of his seat but instead spread it out with his full wingspan so that if it had been in English I could have done the crossword. Eventually the flight attendant managed to get him to settle down a bit for takeoff but that behaviour was only a harbinger of things to come.

I have trouble sleeping on planes to begin with. I have to be very tired to begin with and even then mostly drop off only to wake up quickly again after a minute or two. I’d really prepped for this one though. The flight was late (taking off around 2am home time) and I’d purposely not slept in at all that day in hopes of being just zonked when I got on the plane. Mission accomplished on that, but I didn’t plan for Mr. Middleseat. We’d just finished the dinner they rather bizarrely served on reaching cruising altitude (at everyone’s relative 1:30am or later time?) which I’d eaten mostly for not knowing how long it would be til more food and most people were settling in to try and grab some sleep. We both stood to let the window seat woman out for a pee (and in the end we all went) before settling back in for what I hoped was a few hours of peace. Not so much, he took off the preposterously heavy jacket he was wearing and jammed it down between us rather than putting it under the seat or in the surprisingly empty overhead bin then proceeded to turn up his video system to the brightest possible level and volume and watch a kung fu movie with so many random flashing action scenes it was a good thing we didn’t have epileptics behind us. He snorted about every five minutes until I just knew I was going to get sick(er as I was already recovering from a cold.) I’m not sure where he was from especially as he was a wizened older dude but though he clearly read the cantonese on the menu as he’d point to things but then yelled at the attendants seemingly not understanding them so I’m guessing it was not his first language.

He jammed his elbows into me at every opportunity, had his foot down inside the well of the seat in front of me for a good half hour until I finally “accidentally” kick him hard enough he got the message. I’d recoiled enough from him that unfortunately it just meant that every time a flight attendant or bathroom person came by they’d bump hard into my shoulder and wake me up. Not that it really mattered in any case as he felt absolutely no shame in stretching and just random shoving his shoulder hard into my personal space (or the window lady as he once knocked her glasses clean off.) My only moment of hope came about 4 hours into the flight, his movie had ended and he was scrolling through the options for another before seemingly giving up and was facing enough in the other direction that his spasms were mostly missing me. I managed to fall asleep for about fifteen minutes (based on the songs that had gone on my soft playlist on the noise cancelling headphones) when suddenly I was smacked by a flight attendant yelling NOODLES! Yes folks apparently Cathay Pacific randomly serves hot chicken noodles on the plane, which is cool and all but honest to god it’s the middle of the night, can’t we save the hot food a bit longer and just gently toss people some pretzels or cookies if they have middle of the night munchies? I did not partake being still full from late night dinner but MiddleMan did of course, with as little courtesy as before, his elbows flying out so far that if I’d gotten noodles on my tray they would have been on my lap or the cabin floor.

He decided to up the ante after his snack and pulled out an ipad (full brightness of course) on which he proceeded to watch what I think was the previous movie in the series that he watched on the in flight entertainment system while still leaving the other screen on in full brightness as well. I had a movie on in low brightness mode which was easily the equal of most tvs in picture quality in the darkened cabin so there was no reason for it but alas. Sleep efforts were further hampered about an hour later by a woman bringing her screaming toddler to the back of the plane presumably so she could walk him around and wake up everyone back there rather than her husband in the equally uncramped midplane potty area.

Suffice it to say by the time we finally landed in a rainy/foggy Hong Kong both of us wanted to kill the man. I let him out of the row ahead of me to leave and window seat woman and I shared the weariest expression, but no words. At this point I’d probably managed about an hour’s sleep mostly in five minute increments over the previous 29ish hours and my head was feeling about as foggy as the view outside. Unfortunately of course I was only in Hong Kong and had a layover/flight left to go. Hong Kong International helpfully puts a giant “immigration paper” desk right next to the transfer doorway so there was a giant cloud of us buzzing around for a while before making it through the renewed security checkpoint (I don’t really understand why I need to be metal detected again.) Once into the terminal I was honestly very worried about sleeping through the flight so I plonked myself down right at the gate and didn’t move. As usual in a multiflight itinerary where you have ample layover time built in both the previous flights had arrived slightly early to extend the layover then the final flight departed and arrived late because otherwise it would be convenient.

Bangkok airport arrivals were further confusing though to be fair that might have been sleepybrain talking. You are pointed to “visa on arrival” which requires filling out a form and paying money etc. Now academically I knew Canadians didn’t require a visa for a shorter stay but there was no sign making it clear where to go otherwise. Thankfully while I was standing there trying to find my pen a nice airport official came up and directed me to standard immigration/customs. Thankfully the rest was a breeze, relatively quick customs line, easy baggage retrieval and a quick pick up of a sim card later I was on the freeway in a cab heading for my guest house and getting my first taste of the insanity of Bangkok traffic (much more to come on that.)

The guest house itself was recommended as cheap/clean/quiet by my friend Jodi (and Chris) and was as advertised, thankfully they were ready for me to check in and after a quick shower and a bottle of water I was snug in bed at 2pm for a solid solid nap before waking up for a quickie bite in the restaurant/walk and back to bed for a good twelve hours of sleep. I’ll save the initial impressions of this wild city for the next post.