It was tempting to take a boat from Phuket when I departed but in the end I decided to cheap out a bit and take the just as quick inland route as it gave me more flexibility of departure and was much cheaper (in the end I did about 80% of the boat route anyway when coming back.) Getting back to the bus station was the same level of extortionate taxi time but at least this time the man mostly knew where he was going. An hour or so later I was on an a/c bus for Krabi Town.

One of the things you notice hurtling through the countryside on one of these buses (aside from the deathwishes of people driving various motorcycle based contraptions) is the massive variety of dwelling. It’s rare (in this portion of the country at least) to go long without seeing some form of abode, but you’ll pass an ancient looking miniscule house obviously still in use… then immediately there will be a large almost western looking house on a perfectly manicured lawn… followed by a row of shophouses then a plantation of some sort. In some cases these clusters coincide with what you might call a town, others they appear to just be randomly at some point along a highway.

The obsession with gates and walls is a very different thing culturally from home as well. Pretty much every government building is surrounded by a (usually spotless) pale wall with a large concrete gilded sign advertising that it’s something like “Regional Court for Young Persons.” My guess would be that the government has gone on a building spree of late given the number of these similar structures around. The gate thing is definitely mystifying at times though. From talking to a chatty lady on the bus who wanted to practice her english I gather that it’s a combination of things. Gates are the first thing your guests see so they have a connotation of status as well as symbolism to many buddhists. I’ve got to say though, I saw a ridiculous number of schools (both in Bangkok and rural thailand) with elaborate beautiful gates that look like they cost more than had been spent in the previous two decades on the maintenance of the school buildings behind them.

The road to Krabi passed back through the costal flats and around Phang Nga bay then south along the coast between the various limestone karst mounts that seem to be looming gorgeously everywhere here in this part of the peninsula. Krabi Town (to distinguish it from its eponymous province) is a small city on an inlet that serves as a transport gateway to a good chunk of the lower andaman coast. Visually it’s not super exciting and the bus terminal is annoyingly far away from the town proper. Thankfully I knew I could hop a Sorng-taa-ou (pickup truck pseudo bus/taxi) rather than pay a cab though the bus driver clearly got a payoff as he made us get off at a taxi/travel stand 250m from the bus station. The others and I nearly immediately spotted a pickup though and so got into town for about 80 cents vs the $10 the cabbie wanted. A short (somewhat terrifying due to a very sketchy looking railing) ride later and I was in the center of Krabi heading for a cheap guest house and eager for a bite as I hadn’t had time to grab more than a bag of (delicious spicy basil) lay’s for the trip.

The guest house was more or less as advertised, around $20 for a single room with a giant (if not particularly soft) bed and shared toilets/shower (a reasonable and spotless tiled room with multiple stalls of each shared with 5 other rooms.) The wifi was strong (and free, something that continues to be a welcome change from the last big trip) and there was food downstairs if you wanted and a pseudo 7/11 on the next corner. More than good enough for a one night stop.

In the short section on Krabi my guidebook more or less said “you have to go eat at the night market” and boy was it right, especially given it was a 3 minute walk from the guest house. Essentially a large farmer’s market food court except every vendor is serving delicious thai specialties at ridiculous prices. Almost nothing over 3-4 bucks a dish for a single serving. It was ludicrous trying to pick a place and in the end it was more or less at random. I grabbed a giant fruit shake, ordered some Tom Kha Gai and arandom curry I hadn’t tried yet and was shown to one of the variety of tables on the riverfront. The book was right, this was clearly the place to eat. There were probably 100ish tables and the tourists were outnumbered by locals to fill most of them. Facing the row of carts were a nearly constant stream of Sorng-taa-ou, taxi, delivery and tuk tuk drivers all stopping for a brief dinner before continuing their shifts. 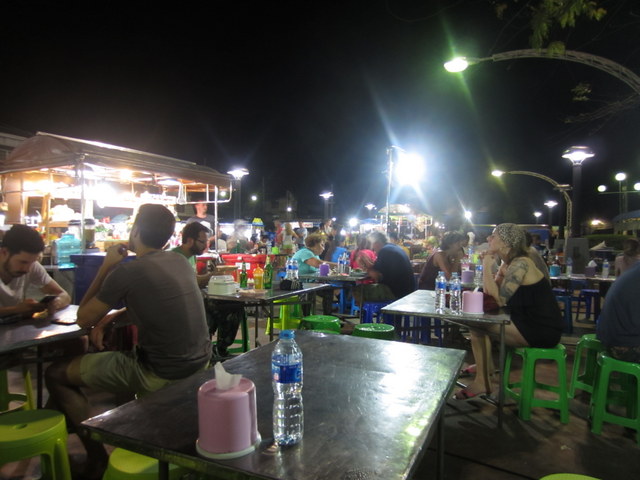 I have no idea how they kept track of who was sitting where and who owed what but I didn’t have to pre-pay. Eventually a different woman from that cart/kitchen came and found me in the warren of tables and deposited my first dish before eventually returning with the second. Incidentally that’s definitely one thing you have to get used to at the more local places here… courses some more or less randomly and never all at once. The more western places may try and have things arrive semi simultaneously but it’s rare elsewhere. If you want your spring rolls first best order them and wait to order the rest for a few minutes as well. The food was amazing and the atmosphere even better. It had finally cooled down a bit and the breeze off the inlet/river at my back was carrying the smells from other tables over to me. Every single dish I saw carried by looked better than the last and if I hadn’t been so completely stuffed I would have ordered another one. The one mystery to me was how one paid as I wasn’t really in eyeline of the cart but also didn’t see anyone wandering up to carts to pay (though I did later find out that’s acceptable too.) Eventually though the woman who had sat me down brought another person over in my direction and I flagged her down and got everything settled. 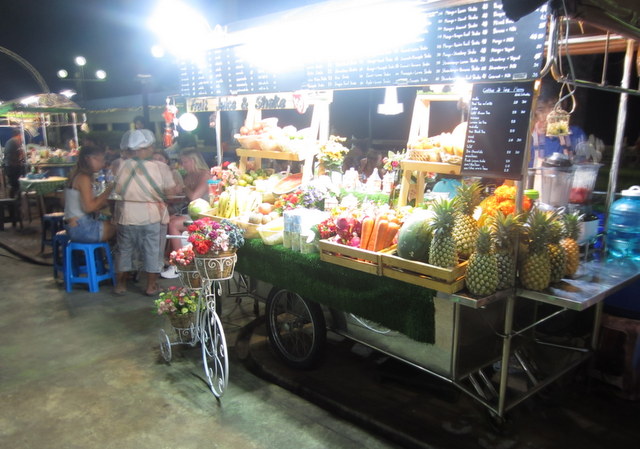 At that point I decided to go for a walk along the riverfront, found the dock from which I’d be leaving the next morning then walked a bit farther up in the other direction and grabbed a beer at a quiet bar and just enjoyed the change in scenery. On the way back to the guesthouse I passed the night market again and decided I’d walked off enough of dinner to indulge in what they called a banana pancake with nutella (or roti depending on the cart) which was more of a crispy pan fried crepe with sliced banana topped with a bit of nutella and chopped into bite size pieces. That finished me off for the night and after a long shower I fell asleep reading in bed not long after.

Next Post: Life is much better, down where it’s wetter!