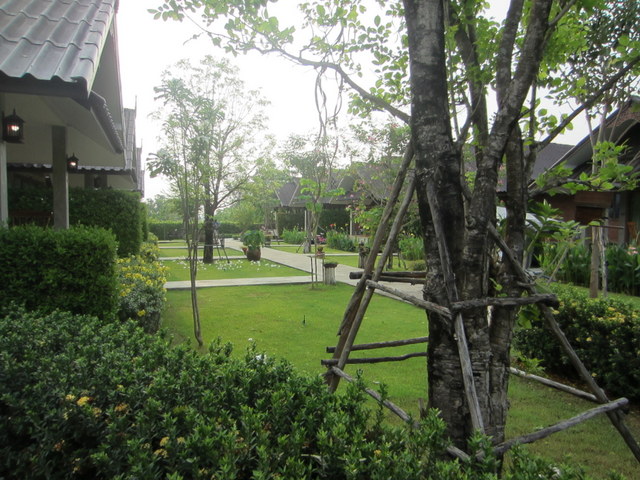 Sukhothai sounded like an interesting place to visit. It’s an ancient thai capital of which many ruins remain in a park you can cycle through. Add on the fact that it’s conveniently about halfway back from Chiang Mai to Bangkok and I was sold.

The bus trip was mostly eventful from Chiang Mai to Sukhothai, definitely less pretty than the train ride had been but pleasant enough by long distance bus travel standards. Arriving in (old)Sukhothai (New Sukhothai is about 15km and is a modern town) I was dropped off right at the historical park gate and of course I was immediately set on by a tout who tried to get me on a tuk tuk for the equivalent of $15CAD to my hotel all of 2km away. I said hell no of course, but I should probably have sought out another tuk tuk farther away as the next couple hours were just awful.

I’d booked the small resort recommended by the spanish couple from my elephant adventure. Unfortunately for me my travel phone has been acting up and not connecting properly (though it seems better now) so I wasn’t able to GPS my way there. Complicating matters as I walked with my heavily loaded bag was the current temp was somewhere around 38. The local tourism folks have placed maps on signs in various places showing the location of various ruins… however they’ve neglected to place “you are here” markers on them which makes them less than useful. Eventually I reached a corner with a number of signs pointing to hotels but sadly mine wasn’t among them so I kept walking, slowly getting worried that I was going to walk all the way to New Sukhothai. I eventually reached another corner with a hotel sign and knowing my hotel was on this side I decided walk down to see if I could see anything… zip, except for a very nice ruined spire off on its own. BUT, upon returning to the road I was able to find a different kind of sign showing hotels including the one I’d just passed which told me I’d gone way too far for mine.

I asked at a local hostel but unfortunately no one spoke English so I gave in and walked back to the original corner I’d thought seemed like a likely destination. There, on a sign completely invisible from the main road (and only facing the direction I was now coming, nothing towards the bus stop) was a sign with an arrow pointing to my hotel. Unfortunately it also said 750m. By the time I finally reached the check in desk I was an absolute puddle and the check in lady took one look at me and handed me some iced tea. I haaaate iced tea but happily downed this one and a subsequent glass instantly. I’m not going to lie, I was predisposed to hate the place with the mood I was in but it was gorgeous, especially for the price.

I quickly got settled in a sparkling clean bungalow with a porch w/ rocking chair. Showered off and threw on my swimsuit to dive into the gloriously large pool for a resort with only 13 rooms. Between the main pool and the partially seperate cold jacuzzi I think I was in there a solid hour and honestly it was only thunder rolling in that made me get out for a bit of a nap.

Finally feeling refreshed I followed the check in woman’s advice, rented a bike from the resort and rode down to the night market on the fringes of the historical site. Bit of an adventure of course as just like elsewhere in Thailand lane keeping is iffy at best, people see the sidewalk (on the rare occasion there is one) as an excellent place to plonk their car/motorbike/table/garbage etc. Thankfully the hotel’s bikes included a flashy taillight (quite good) and a generator headlamp (always aiming well off to my left but better than nothing.) Sukhothai in general was the least western visited place I think for the whole trip and the night market in particular only had a couple other non-thai tourist faces around. I enjoyed the boisterous stage show for a bit then grabbed some Sukhothai pork noodles (tasty but a bit too sweet for me for a ‘dinner’) as well as some chicken satay and a bowl of soup. All together (and with some fresh squeezed OJ) it cost me a whole $6. 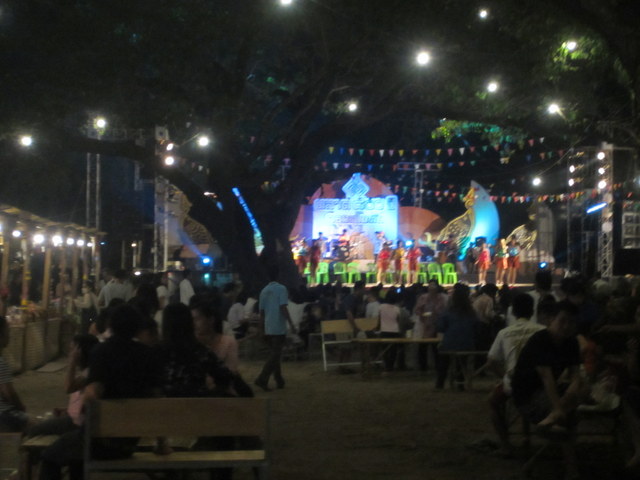 Old Sukhothai (and new from what I heard) is definitely not a party spot otherwise. After a quick spin around town to confirm not much was happening I headed back to the hotel to write a blog post and watch a movie. Since I wanted to be up reasonably early to bike around the ruins before the worst of the heat hit that seemed prudent anyway.

For the first time in thailand my hotel included breakfast. It wasn’t anything special (they weren’t big on keeping things that should be hot hot) but it was bizarrely satisfying to be able to make myself a piece of toast, grab a bowl of golden mango and have some little mini pancakes with syrup and just relax in the morning. Of course not for too long as the ruins beckoned… 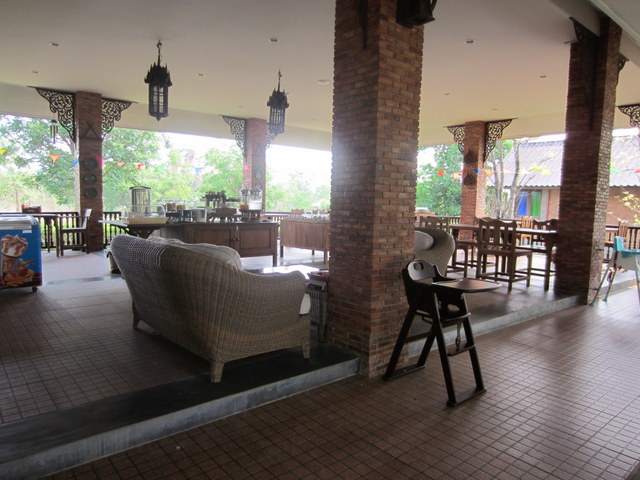 There’s a small extra charge for bringing a bike into the historical park but it’s definitely worth it as many of them are quite far apart. Somewhat bizarrely they charge seperately for the large central area and the smaller surrounding areas outside the main park. There were definitely more westerners around at this point, particularly the giant russian family that felt the need to constantly walk around stretched out across the entire path. After my third time encountering them I just stopped and made them go around me.

There were also a swarm of students from a Thai university in a business and communications course. I got stopped by them a number of times asking for “interviews” and after it became apparent it would be an ongoing thing I agreed but used a different name and accent every time. I hope they all watch the videos together in class one day and get very confused by my dopplegangers.

I did a full tour of the ruins during the day, then after another swim and some dinner returned again as I happened to be there on a day they lit up everything after dark with a combination of floodlights and flame bowls. Very few people were there for the nighttime visit and everything felt more ancient as a result.

With that it was time to get back to the environs of Bangkok for the flight home though I have one more side trip planned for my last couple days to get my WWII history on.

Next Post: The Death Railway and the Canadian Fish Buffet