So colour me shocked but again I’ve had a number of questions about whether I’m posting a travel blog for this trip. I honestly wasn’t sure as this is a bit more of a conventional holiday (I’ll be spending roughly half of it in resorts.) But as I always like to make notes about my travels and there seems to be demand I guess here we go again! 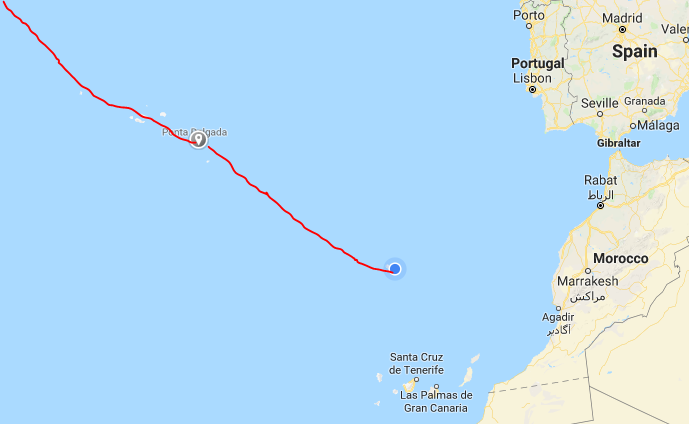 Our route (sort of?)

The morning we were leaving for Madeira my mother called me and asked, what time do you think we should leave for the airport? I couldn’t help but reply “it doesn’t matter what I think, Dad is going to get us there when he thinks it’s necessary regardless…” Sure enough, I was told 12:45 and in fact he was there closer to 12:30 as we set off on the 20m max trip to the airport for a 3:45 departure.

That was unfortunately the last bit of smooth sailing for the day. Does anyone remember when WestJet was about good service at a good price? At this point I can’t remember the last time I had a flawless experience with them and this time was definitely far at the other end. Unfortunately for us our flight had a fairly tight Toronto connection time of 1h30, but since we would be in the same terminal and the airport person confirmed our luggage would flow directly to our final destination we were feeling ok…

Toronto apparently had a minor amount of snow overnight so the plane taking us there was late arriving from TO. We were supposed to board at 3:45, ended up supposedly boarding at 4:10, only actually got away around 4:25. Our pilot tells us we should easily make up time in the air and sure enough he’s right, we arrive in Toronto only about 15-20 minutes behind our original time. In the meantime, our friends at WestJet have routed another plane into our gate. God forbid we just take the next one that’s open so we sit on the tarmac for another 45 minutes, by the time we sprint off the plane there’s 25m at most left til takeoff and they are usually closing the gates for good around 15 minutes beforehand. The supposed “gate agents to assist with connections” are nowhere to be found either.

I quickly scanned the board, found our gate (thankfully not the furthest end) and began powerwalking that way with mom trailing behind until I heard the robocall for final call, all passengers should be on board and basically began sprinting. I’m fairly sure I reached the gate just as they were about to offer our tickets to some standby folks and waited for mom to catch up as they told me our luggage was unlikely to make the flight (thanks WestJet!!!)

So hooray, we made it by the skin of our teeth but obviously had no time to buy a drink or any more food or, more importantly, use the restroom after ~30m of landing time and ~45m on the ground stuck in our seats. We were now on Azores Airlines which seems to have the lowest tolerance for turbulence of any airline I’ve ever taken so they seemed to take forever to turn the seatbelt signs off and unlock the restrooms. We both more or less sprinted the moment it dinged off. The flight was relatively uneventful otherwise despite some long “turbulence” times and more or less no service from the cabin crew after the meal (definitely wish I’d had a chance to buy some water.) Uneventful that is… until we arrived. 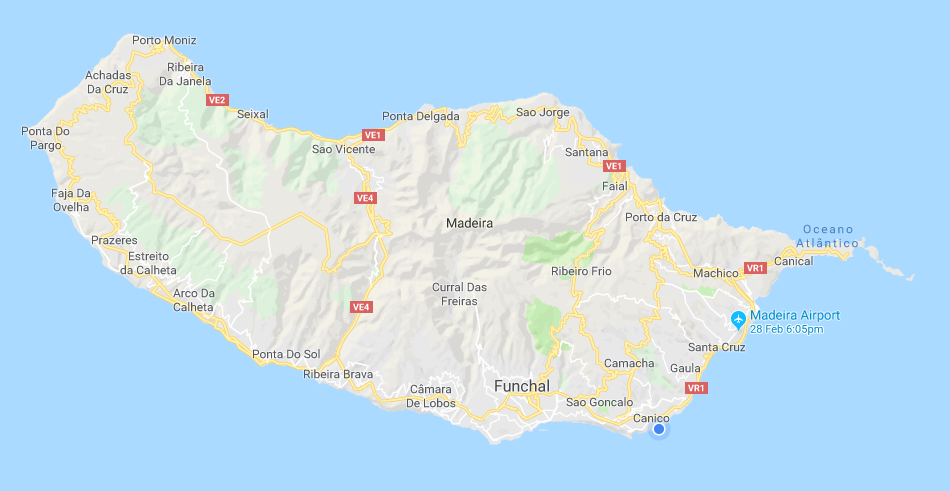 Madeira Island: A semi-autonomous region of Portugal (though actually closer to Morocco)

This second leg was Toronto to Puerto La Planchada in the Azores. We caught a healthy tailwind into/through the jetstream and arrived at the Azores around 5:30am local… at which point the airport was wait for it… NOT OPEN! So yes, we got to wait for around ~45 again, this time in the air, before we got landing clearance and landed at the teeny but modern airport. Deplaning directly onto the tarmac we got hit by a gale force wind coming off the open Atlantic and scurried inside for a brief passport check and a shortish wait for our flight to Madeira proper.

This time it was a Dash 8 (a smallish turboprop plane) and the two of us were surrounded by members of a soccer team. I don’t know about you but I have unwanted associations with travelling on a prop driven plane surrounded by a soccer team but we thankfully landed un-eaten at Christiano Ronaldo airport on Madeira just before noon. Shockingly enough, it was even a fairly gentle landing. (Do yourself a favour, don’t be like me and accidentally watch a youtube of “crazy landings at Madeira Airport” before you go.) It’s known to be windy and part of the landing path is out on pylons over the sea.

Not surprisingly at all there was no luggage waiting for us at the carousel so we registered our hotels for eventual (as I write this hopefully today*) delivery. Our luck finally turned as we emerged into a bright sunny day with a nice sea breeze, as views from an airport go I think it’s pretty hard to beat. Some preliminary research had made it clear the aerobus into town was the best way to go so we hopped on board and proceeded to marvel at the driver maneuvering the giant bus through the narrow cliffside roads heading off the highway into the capital of Funchal.

For those who may never have heard of it Madeira is a volcanic island off the coast of Morocco that is a semi-automonous region of Portugal. It’s known as the ‘Island of Eternal Spring’ and has pleasant if not particularly hot climate overall with heavy variation depending on where you are on the island. The south end of the island where Funchal is located has most of the population nestled in the varied valleys that form a sort of ampitheatre leading down to the coast. 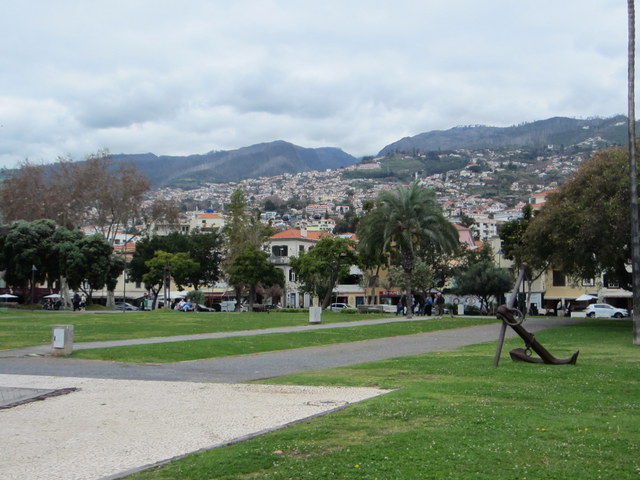 Funchal from near the harbour. The city core is quite small but the residential neighbourhoods sprawl upwards where ever a flat enough space for a house can fit.

Our first impressions were quite pleasant. I had a vague idea of where our hotel was and we started heading in the general direction when we found what seemed to be downtown’s central boulevard. Doing so we stumbled across a band of musicians playing various jazzy numbers with a bunch of folks flanking a bizarre creation of tubes. It looked and sounded like something the blue man group would play but their percussionists took turns getting some pretty amazing driving baselines out of the thing with their wide flat mallets. We ended up watching them for quite a while as we heartily enjoyed a bench and some peoplewatching at the same time. 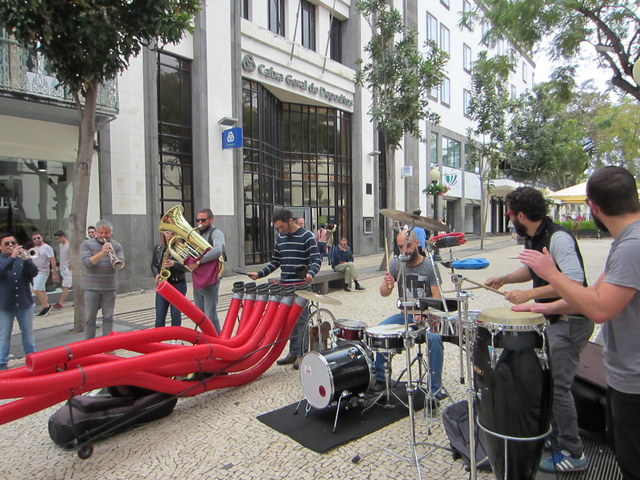 Impressive sounds out of that collection of tubes, all mounted to wheels too.

Eventually we stumbled wearily towards our guesthouse, eventually finding it up a side road that was seemingly taking 50% of the traffic exiting downtown despite being at first glance only wide enough for a vw bug. Our plan for Madeira is to spend a week at a resort we got an exchange for via my parents’ time share, but that wasn’t until thursday so we thought we’d get some simple digs in the city in the meantime. It was tiny, very basic but utterly spotless and as we had no plans to really spend any time in the room at this point more than good enough. Only complaint was facing that same busy road but thankfully it quieted down almost completely after about 8pm. 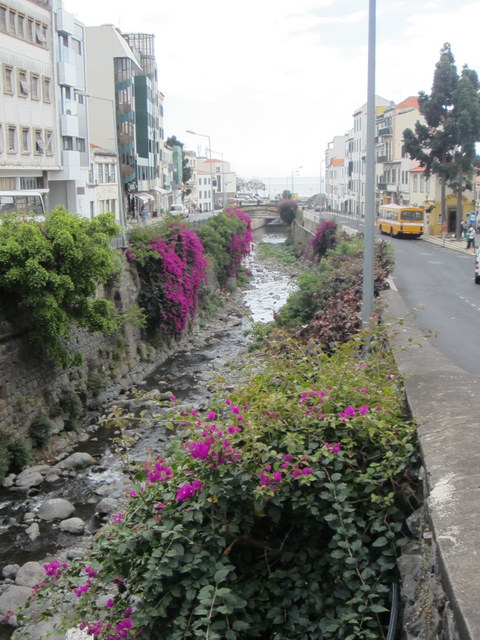 Awake time at this point was roughly 23 hours so after squeezing in turn into the postage stamp sized shower we succumbed to the urge for a short nap. Unsurprisingly this turned into a longer nap but eventually we rousted ourselves, put on our only fresh clothing and managed to walk down towards the waterfront (with a quick stop for toothbrushes.) A second medium sized cruise ship had nestled in during our nap and the streets were fairly lively. I’m pretty good at quickly getting the hang of navigation in a new town (something about being able to mentally translate a map well) and figured out we were heading toward the large market. It was about to close but we had a quick look around at some of the flower stalls (the sellers required by law to wear traditional dress) and made a note to come back later. Thankfully the market also serves as a gateway to the old town. 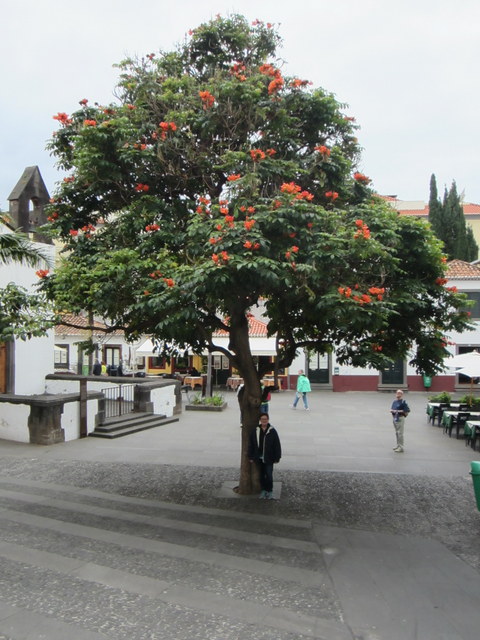 Funchal’s old town has apparently undergone somewhat of a transformation of late with an area that was formerly somewhat rundown with many abandoned buildings. Not long ago all commercial shipping left Funchal proper and with it many of the residents. Thankfully unlike you might expect it wasn’t all torn down for a few giant hotels but is now filled with small restaurants and bars, art galleries, hostels and guesthouses (I would stay here next time.) Also notably, an art project was started to convince people to make and preserve art in the area that involved people painting the derelict (and non-derelict) doors with vibrant colours and murals. Some are great, some are just hilarious but they all combine to give the district a distinct vibe. 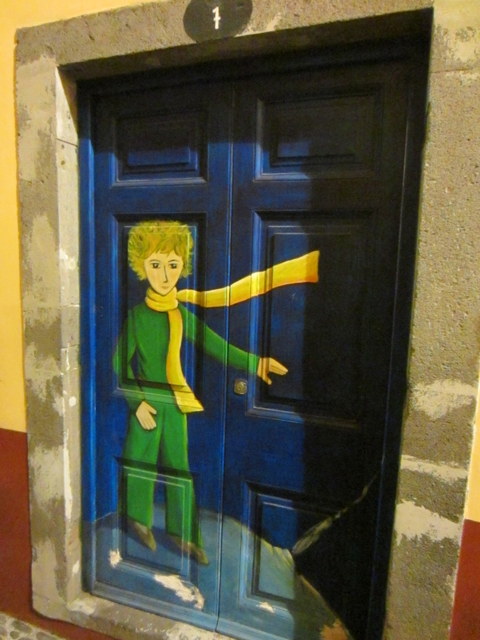 How could I not take a photo of this one (Doors of the Old Town, Funchal)

We eventually chose a Madeiran restaurant that was also hosting a Fado performance for a show while we ate. Fado is Portuguese folk blues, traditional music with a history of being about longing and melancholy. In practice it’s usually very dramatic sounding songs sung with much seriousness and accompanied by Portuguese guitar and an acoustic base guitar looking thing. Our group was 4 singers trading off and they were really quite talented despite my Portugues being essentially limited to yes sir, no sir, thank you, hot dog. By the time we finished our meal and show however we were absolutely done and headed back to our guest house ready to crash. 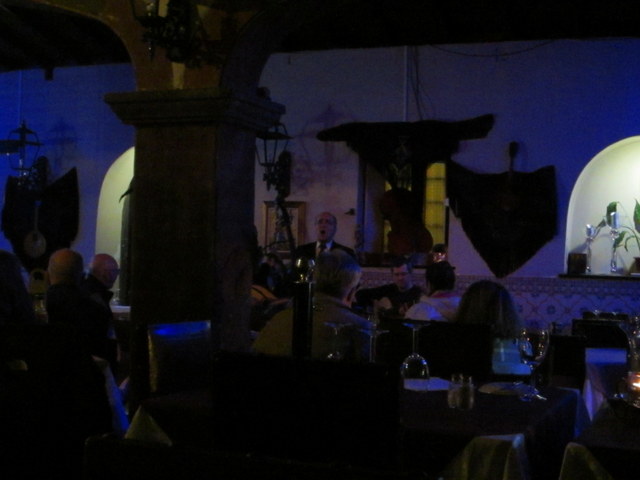 Edit note: More to come soon, it took me a few days to finish this post as morale lowered a bit/other concerns overtook writing over the next bit.