The stress letdown of finally having our bags, our clothes, our toiletries meant we finally slept soundly that night. Saturday morning we even had a solid sleep in and fairly quickly decided to just have a relaxing day (the courtesy bus wasn’t running but we later discovered that the city buses worked pretty well for the area.) After some toast we headed down to sit by our pool (and overlooking the cliffs) and relaxed with our books for a couple hours. It was gorgeous and sunny (around 23c I believe) and we ended up trying the (outdoor) pool but it was completely unheated and was sitting a a temperature closer to the normal ‘winter’ temps for Madeira so it was pretty much West Hawk on May Long/Lake Superior type cold. Had a quick swim to stretch out my hip that’s been giving me problems again since my tailbone accident but didn’t linger in there super long.

We’d noticed on google and on our bus ride down that there was a german restaurant up the hill and we thought some schnitzel might be a good ‘different’ dinner. Unfortunately after huffing it up a few levels we found the place was closed (we saw activity later so it seems like they likely open March 1st like some other things here.) In the end we ended up at another Madeiran/Portuguese place close to the hotel. It was in the Garden of an older small hotel and seemed in fact to partially built into the oldest part of the hotel. The kitchen seemed to be in two converted rooms and the bar could easily have been a former lobby. Though we didn’t have anything that required it, many of the meat came on giant skewers where the waiter would come to your table and set up a stand then hang your meat from it. It was sort of halfway to the Brazillian steakhouse method. Our choices ended up being tasty and after a lovely meal (and mother indulging in her 2352nd fancy coffee of the trip) we retired for some cards. It was a nice recharge day after going hard since arriving. 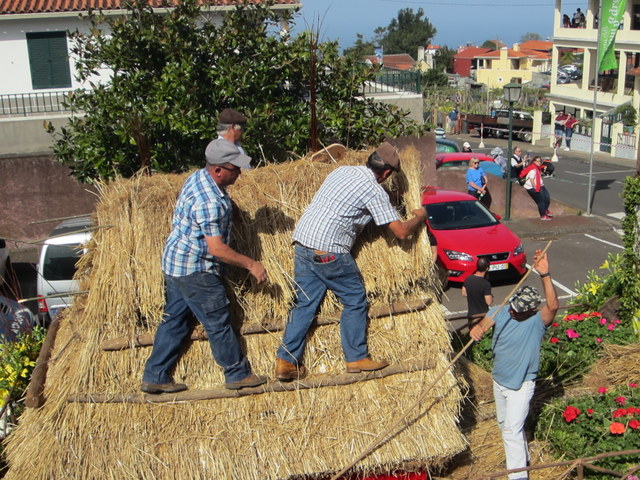 This period (it seems to vary by the individual town) is the start of Carnaval here on the island. We’d booked what was called a tour but ended up mostly being a mildly guided shuttle to one of the more traditional towns on the Northeast part of Madeira to see one of their events. Apparently their festival is sort of a local thing adapted into a carnaval thing once that became a ‘thing’ so it goes by a few names. The highlight was what we were told was a ‘children’s parade’ that was actually just an incredibly slow moving parade of bands, children’s dance groups, floats with local pastoral scenes (an active building of a teeny a-frame traditional house for one) and agricultural things. 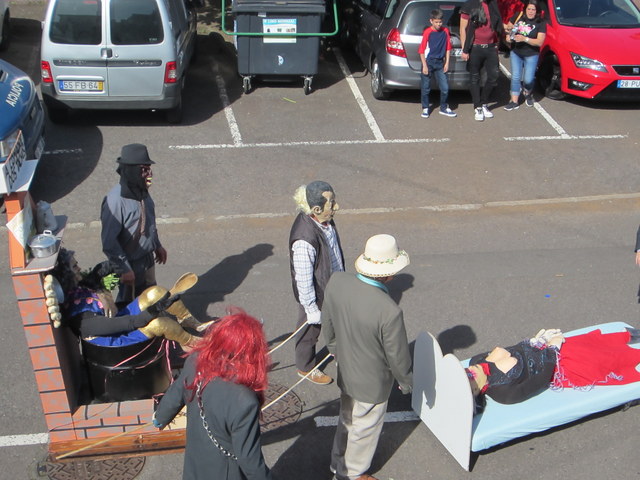 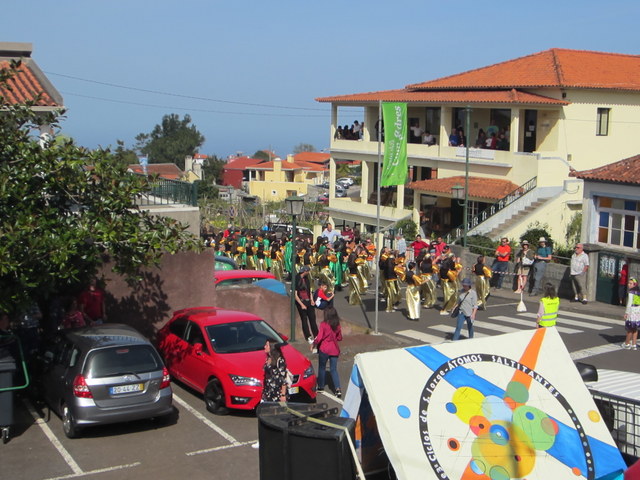 We enjoyed the wackyness for a bit then as the parade finished explored the town square which had some sort of entertainment going on (it seemed very talky but people were enjoying it.) Everywhere around the square there were booths with food and drink, almost exclusively Poncha, Bolo de Caco (portuguese flatbread wrapped around various meats/cheeses/garlic butter) and skewers of beef pork or chicken cooked over embers. As is the norm in europe you could carry your hooch around so we sampled a few things then made our way back up to the bus and town. 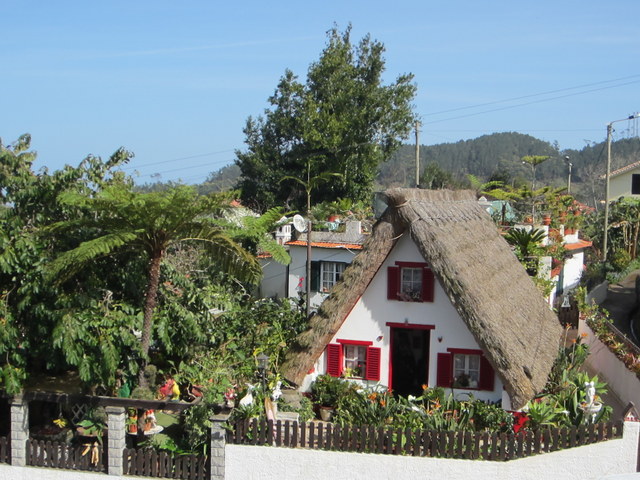 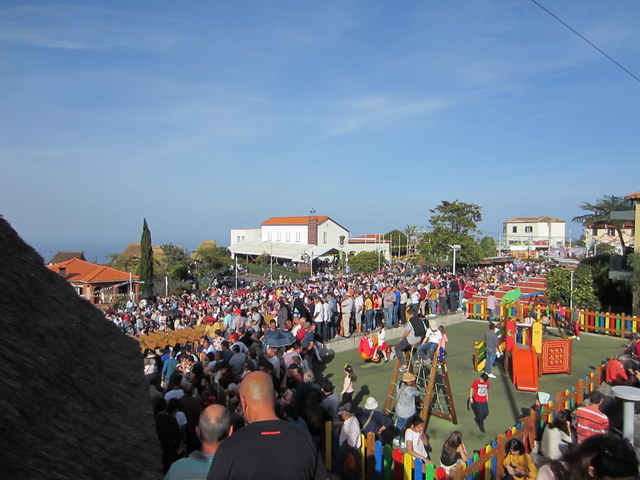 Going to and coming back from Santana we got our first good look at the far end of the airport from the ground and it’s absolutely incredible. Tons of concrete pillars holding up the entire runway extension most around 70m high according to wikipedia. Between the limited space and the winds here it’s easy to see why it’s in the top 10 most dangerous airports in the world. 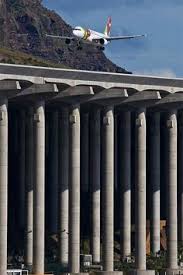 Not my image but you get the idea…

Settling back in at happy hour we ran into the same couple that had commiserated with us on friday night and got a recommendation for a different tour company/made a booking. I also scouted out what looked like an interesting russian run cafe nearby while snagging some drinks/chips for the room.

Monday was another day of gorgeous weather and we were thankful as we had booked a tour to go up to what’s called Curral das Freiras or the Nun’s valley. Though we actually started the day popping into Funchal and having breakfast back at our favourite bakery and stocking up on bread for back at the suite. We also explored the absolutely gorgeous Se Cathedral in Funchal which is simulaneously grand and impressive while still maintaining aspects of being a fisherman’s/working man’s place of worship. 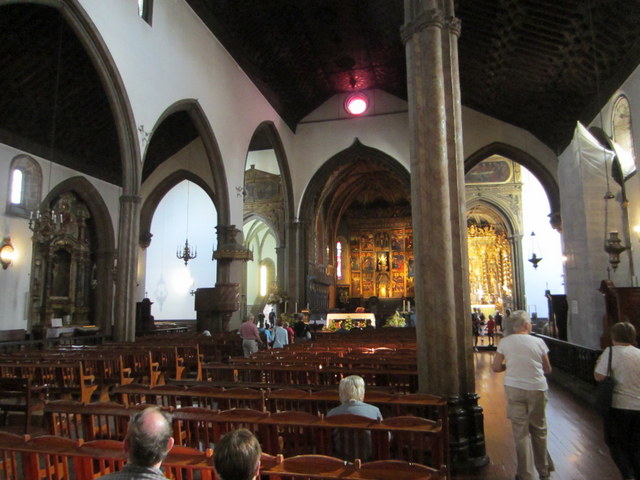 I’ve been to plenty of hilly or mountainous places in my time but Madeira is definitely the most ridiculously and suddenly up and down. The relatively recent volcanic origin seems to be to blame for the incredibly sharp ridgelines that appear in certain areas. Nowhere we travelled was this more evident that the way up to Nun’s valley. Overlooking the town itself is a hotel and overlook high high up on a ridgeline and accessible by what used to be the main road into town before one of the major tunnel projects of recent years created a giant ramp tunnel. It’s absolutely amazing how sudden and severe the dropoff is and it was odd to climb up to the lookout then look down on birds soaring high above the town but still hundreds of feet below us. 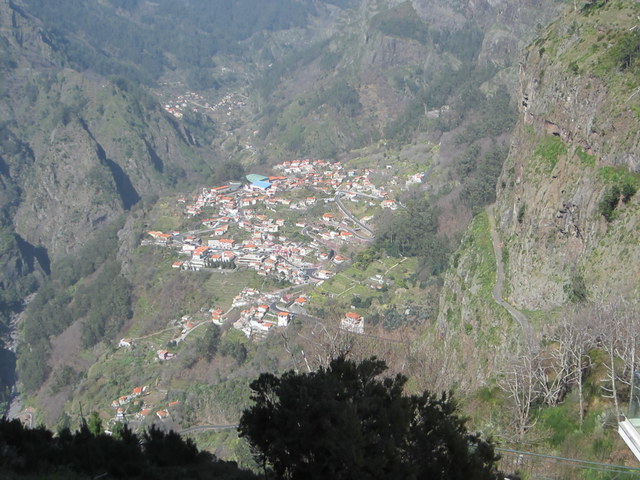 Curral das Freiras from the overlook

The town itself is best known as a cultivator of chestnuts on the island and they produce chestnut cakes, chestnut liqueurs, roasted chestnuts etc. There is even a chestnut museum and a festival at the end of summer. It’s not a particularly exciting town other than it’s picturesque location so after a quick look around we grabbed a drink and a slice of cake (without checking the prices) and I had a bit of a heart attack after as I realized it had cost us the equivalent of $27.50cdn. Ah captive tourist pricing at it’s finest (though desert in general is quite pricey at restaurants here, part of the reason we’ve mostly stuck to bakery treats like our fave custard tarts.) 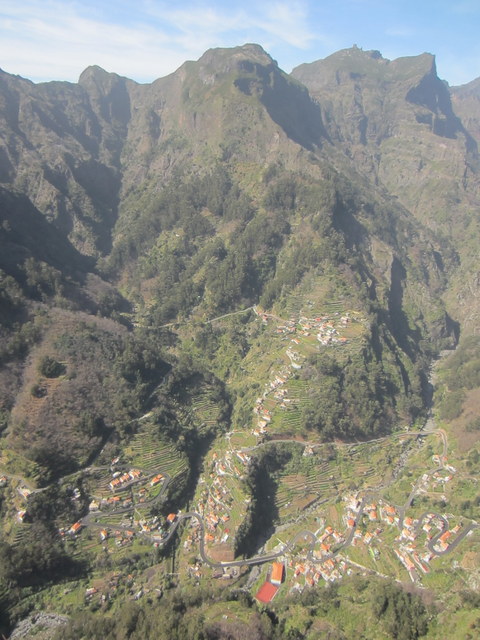 The valley road downward from the overlook

Arriving back in Funchal we managed to just make our transfer and got back to the hotel to realize that we’d never had lunch other than the cake… but also weren’t actually that hungry. I suggested we try one of the restaurants down the hill towards the water and we ended up wanting something light. We ended up at the place I’d bought drinks at the other night. Though presented as a “snack bar” and having aspects of a minimart/liquor store too, the cafe portion was fantastic. I spotted something called “russian ravioli” on the menu and asked the owner if they were Pelmeni. He seemed instantly enthusiastic that I knew what they were and told me they were handmade in house as was his sour cream (something I imagine would be difficult to find in madeira otherwise.) They were in a word… heavenly. Ultrathin dough, mix of beef and pork and spices, juicy and flavourful and served in a little clay pot. The place is owned by ex-pat Russians (mother and son) and it showed as they were the best pelmeni I’ve ever had in Portugal of all places. Alex (the son) insisted on giving me a free (very large) shot of vodka that I ‘HAD TO’ drink before eating the Pelmeni.

After our meal he also insisted we take some free dessert treats home and invited us to his friday violin concert which sadly we couldn’t make as we leave thursday. One of the local soccer teams was playing against Sporting Lisbon while we were there and a number of locals were enjoying the game which somehow lead to Alex and I talking about hockey. Turns out he’d seen Calgary touring in Russia as a younger lad and had loved my all time favourite player Theo Fleury, small world.

Previous Post: The Wicker Man and the Vengeful Winds