Our flight out of Madeira was unfortunately not until later in the day (I would have enjoyed getting the full day in Lisbon) but thankfully we were able to make the most of it and not just sit around with our luggage. After bopping into town we had quick breakfast at our fave bakery then walked down the seafront to where we could catch a bus up into the hills to the Botanical Gardens. Once we found the right departure stop the ride was easy and we were deposited right outside the gates of the sprawling park. 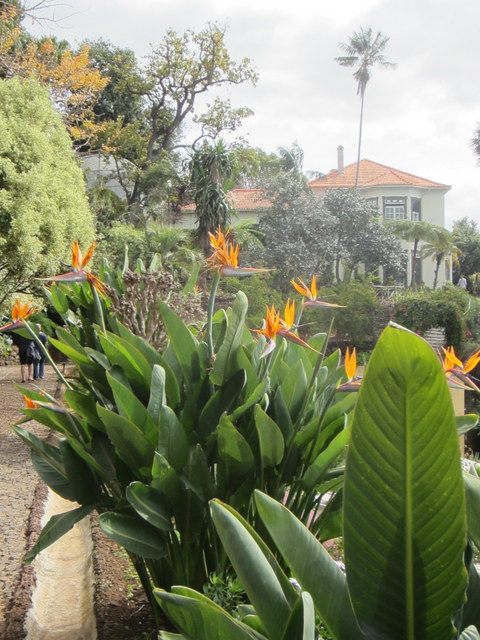 Created in the 60s out of the plant collection/studies of one of the religious orders which was expanded into a full scale municipal garden at this location. It’s a really diverse collection and designed to be flowering pretty much constantly (though the whole island does that.) There are sections for endemic Madeiran plants, wide variety of palm samples, topiary, orchids, other flowers from around the world as well as a sample of agricultural plants and herbs from the collection. 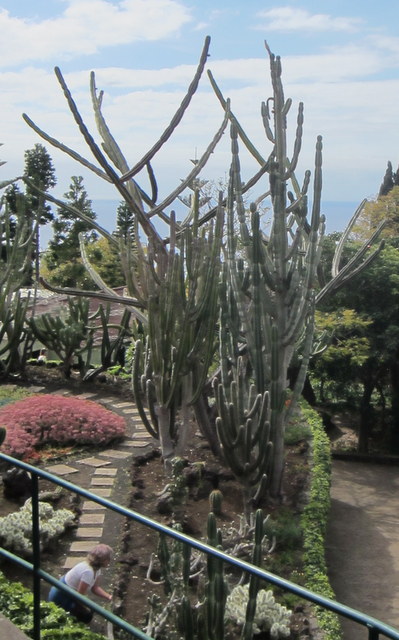 Some of the sections are really sculpted, others are left a bit more freeform and wild. It was worth the trip for the views alone as it’s up at the same height as Monte (which we visited previously) but hangs over a much sharper cliff looking down into Funchal. There’s also a water feature that is perhaps more vibrant in summer but at this time of year was basically just the home for a symphony of croaking frogs with one of the resident cats occasionally looking down and trying to decide if he wanted frog legs for lunch.

After a quick drink and a visit with a local dog who roams around looking for friends (we saw him hopping in a fountain in the gardens to cool off) we hopped the bus back down, said our goodbyes to Funchal and headed back to the hotel. Thankfully the wind wasn’t too crazy and flights were landing as normal, being somewhat of a plane nerd (not to mention curious about this weird airport) I was happy to see an old school observation deck after security. Nominally it was the smoking balcony but it overlooked all the runway operations. Eventually we headed off on our short hop to Lisbon (direct thankfully and not back to the azores first.) It was somewhat of a wrench saying goodbye to our bags so soon after actually recovering them but we crossed our fingers, walked out to the plane and boarded by the rear door.

Madeira turned out to be pretty great for somewhere I’d never actually given much thought to visiting. It’s gorgeous, very different and everyone is incredibly friendly and welcoming. I think we did a pretty good job at exploring but I think if I returned I’d probably rent a car and spend a bit more leisurely time exploring some of the outer towns.

It was a quick flight to Lisbon followed by a trip via subway to the old part of Lisbon. We eventually surfaced in a darkened square and began making our way towards our b&b dragging our (thankfully present) bags across Lisbon’s slippery cobbles. At first glance things seemed a bit seedy as I was offered hash twice in the first couple minutes of walking. Lisbon is also a fairly hilly city and our newly trained calves got put to work hauling our luggage upward and onward. Looking at some reviews online as well as a note in the Rick Steves book for Portugal had directed us to a series of rooms run by a fellow called Luis. We were in the Zuzabed B&B which we later learned was the owner’s former house. It was the top two floors of a narrow building, another 3 narrow staircases up to our small but cute and clean room with a view of the castle hill. 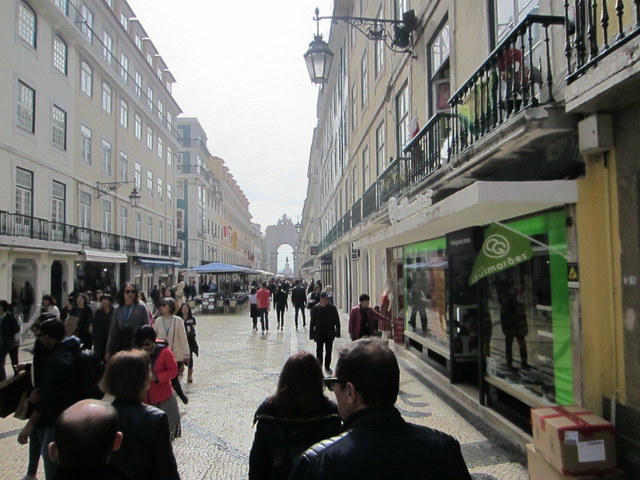 After getting us settled in Luis recommended a restaurant for a late dinner but unfortunately they were already closed for the night before we got there. We ended up following his alternative advice and heading up into the neighbourhood called Bairro Alto which was more or less just up a couple more flights of stairs. This bohemian maze of twisty cobbled streets was still quite busy with people at the dozens of bars and restaurants. We eventually ended up at a dinner and fado show restaurant again which seems to be turning into a first night tradition for us. Dinner was good but we were pretty ready for sleep not long after in hopes of coming out strong the next morning.