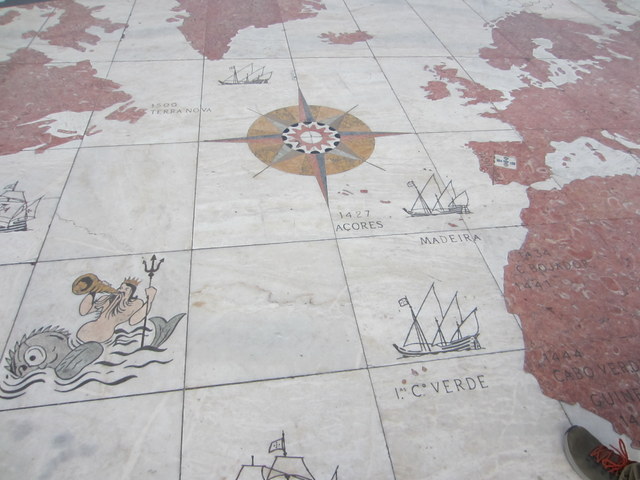 Here there be monsters

Lisbon is NOT a flat city. It’s the kind of place where if it was SimCity I’d edit the map because there are too damned many hills.

Our host Luis joined us at the B&B breakfast table (a buffet of various things and freshly made eggs and bacon if requested) and while chowing down he helped us make a plan of attack for the day. Luis is a vibrant little man who seems to be building up a small empire of mid priced guesthouses here in the trendier old neighbourhoods of the city. Even so he seems genuinely delighted to greet every guest personally and help them learn about the city that he clearly loves. If you’re ever heading to Lisbon his places are heartily recommended.

First up was pre-buying our tickets for the train to our next destination and then dropping off our laundry. I managed to convince mom that we should just use the service as that was easiest both in terms of location and not waiting around all day during some of our lisbon time. Getting our tickets came first though but that was thankfully easy due to the train station nearby having a long distance office despite being mostly for local trains. That didn’t stop the lady in the office from being grumpy about us making her work, though she lightened up at least a notch once she realized we didn’t want tickets for Sintra (having passed at least 3 posters that said Sintra upstairs not here.) The laundry wasn’t much farther away then we were able to explore the Baixa for real.

In 1755 Lisbon suffered a devastating earthquake (somewhere offshore, estimated at about a 9.5) and subsequent tsunami that destroyed large sections of the city. The tsunamis even reached Cornwall, Barbados and possibly Brazil. The quake also had the misfortune of hitting on All Saint’s Day when thousands of candles were lit for masses everywhere in a very catholic city igniting a massive firestorm. The resulting devastation left the center of Lisbon essentially non-existent and a now earthquake paranoid king fled the city and set up the world’s swankiest campsite a few miles outside town leaving a minor noble in charge. He (The Marquis de Pombal) eventually became a pseudo dictator under the King but in his early days he set about rebuilding the Baixa district (a flat valley between two large hills) to exacting specifications. Portugal was reeling financially from the aftereffects of the quake but the rebuilding needed to be done. The resulting construction was an early example of a planned city and has a very strict grid pattern, uniform heights and facades that are mostly uniform. Pombal didn’t rebuild many of the churches that were destroyed, but those he did rebuild also use the similar facades in most cases. It’s really quite the effect and apparently most of the buildings also contain innovative anti earthquake/fire methods for the time as well. 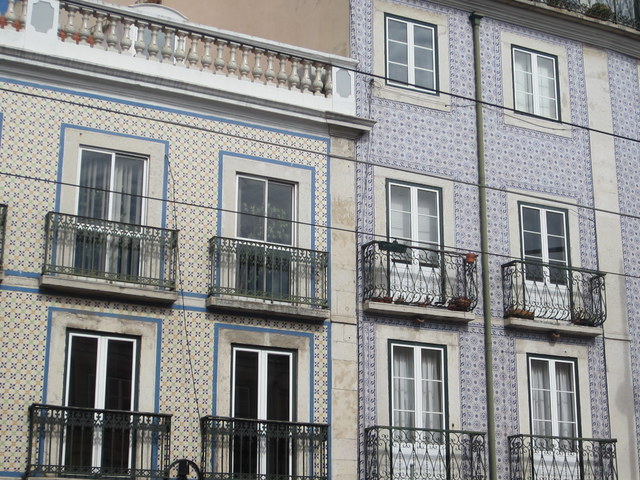 Some of the tile facades

It’s really quite impressive, though a closer look reveals a lot of abandoned upper floors. Apparently rent controls have been in place for 50+ years and many landlords no longer maintain anything and some of the buildings are just rotting out other than the stores/cafes on the main floor. Hopefully that can be turned around before it gets out of hand. The other effect of the earthquake of course is that though Lisbon is one of the oldest cities in Europe (it predates Rome apparently) there is little evidence of that in the tradition city center. While these buildings are old from the perspective of someone from our part of the world by Euro standards they’re barely teenaged.

The large plaza where we first emerged from the subway is known as Rossio by the locals and may once have been a roman racetrack, now though it’s our starting point as we head slowly down to the waterfront and the giant Praca do Commercio (originally designed to be the commercial entrance to the city.) On the way there we travel through the Arch of Triumph, one of the few really extravagant bits of arty architecture Pombal allowed as part of the original reconstruction, ever so shockingly there is a representation of him on it. The plaza itself is vast but so full of sunglasses sellers and other nonsense that I put on my shades just to deflect them. 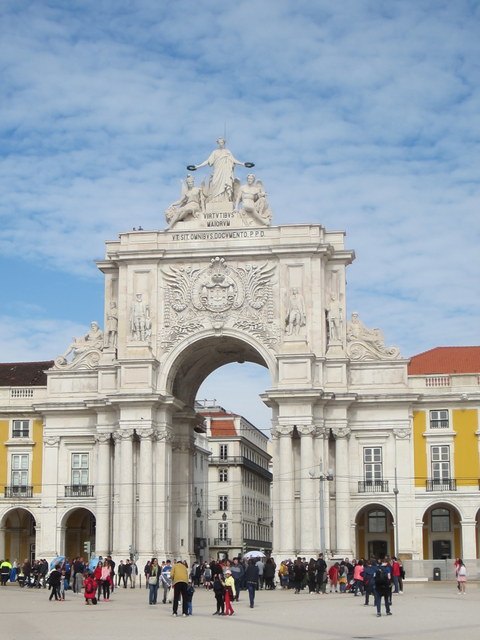 At Luis’s suggestion (warning us that the Castle hill would be more interesting the next day when we could also see the flea market) we decided to do the sights of Belem that day. We had originally planned on taking one of the city’s historic trams from the plaza to what is essentially a suburb of Lisbon (it’s where the King’s tent city was set up as mentioned earlier) but they were so incredibly packed that I called an audible and we took a regular city bus instead. As much as I loved the look of the trams I would have been standing packed like a sardine and unable to see out the window anyway at my height. From the bus we got an interesting view of public art projects and a seafront (well riverfront but the mouth to the Atlantic is very nearby) with hundreds of old warehouses/shelters re-purposed for more varied uses such as sports complexes, restaurants or art galleries. The river itself is still teeming with boat traffic large and small and if you squint a little bit you can imagine what it must have looked like during Lisbon’s maritime explorer heyday. 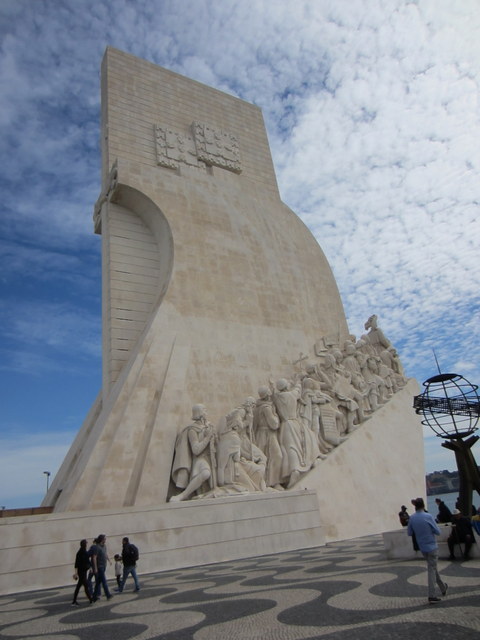 Monument to the Discoverers

We started out by walking to the riverfront to see the Monument to the Explorers which is a large sail like tower with a Caravel prow mounted by the leaders of Portugals. Lead by Prince Henry the Navigator (since his obsession with exploration and missionary work kickstarted the whole thing) and covered by others such as Vasco de Gama it’s a pretty monument commanding a view of the entire harbour. 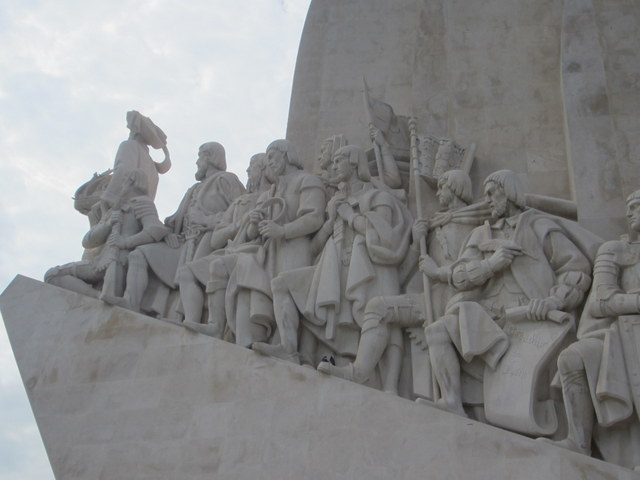 Henry, Vasco and the Gang

Also on the waterfront is the Belem Tower, an elaborate and gorgeous harbour defense fortress built on a small island just offshore. It was apparently once farther out in the water before changes made it now only separate by a small tidepool. We didn’t feel the need to go inside but it was quite impressive. 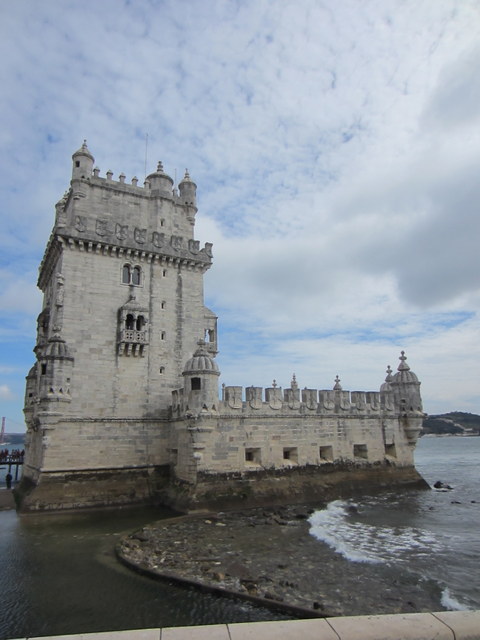 The Jeronimos Monastery (Order of St. Jerome, sadly not Geronimo 😉 ) is a ridiculously elaborate church and monastery built on the site of one of the small chapels visited by fishermen and explorers to bless their coming voyages. It got steadily more elaborate during the age of exploration as the Kings taxed the spices coming back from the new discoveries and kept building (Most of Portugal’s wealth from its heyday went to churches and elaborate homes for the wealthy patrons.) It now incorporates several museums in the old monastery spaces and the church is truly massive and impressively ornate. 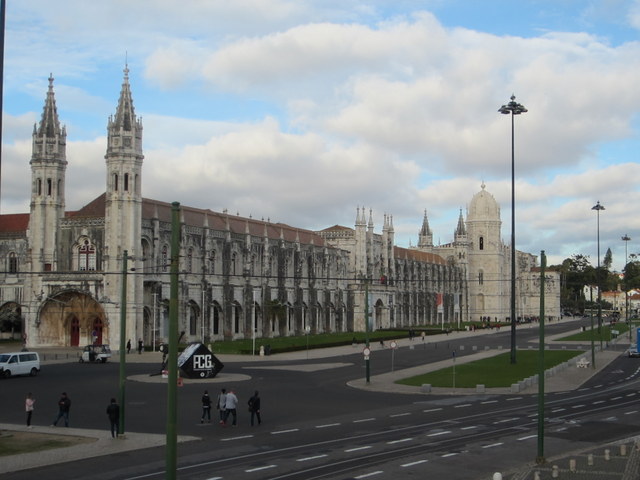 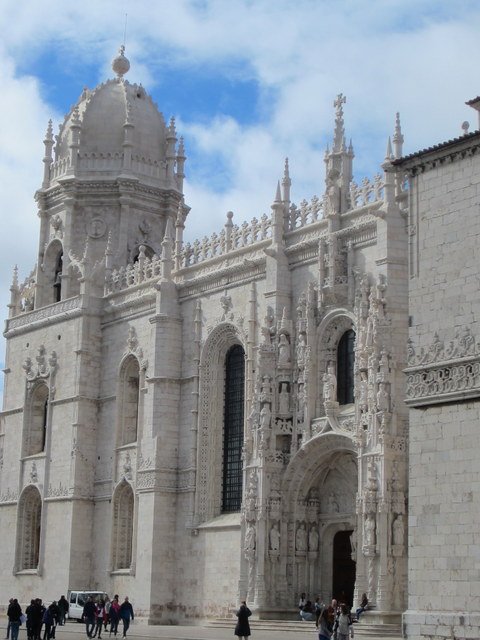 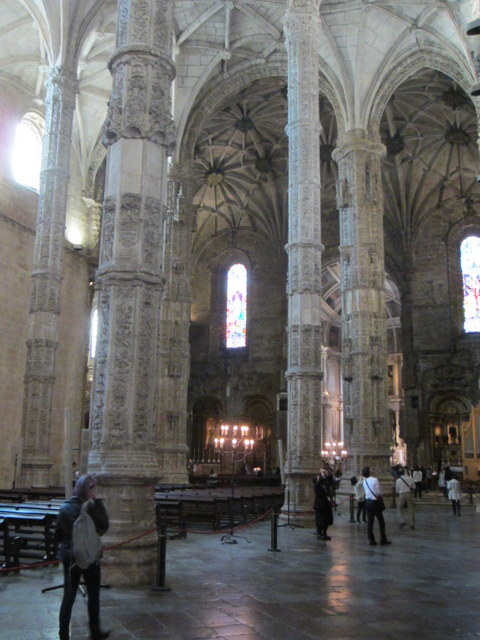 In addition to the ones in the monastery Belem has a cluster of other museums. Slightly misled by our guidebook as to the cost we checked out the modern art collection at a museum within a sprawling arts complex on the shoreline created by a Portuguese billionaire/art patron. As with all modern art not everything was to my taste but the collection is diverse and truly impressive. I thought of my cousin Stephanie checking out a Calder and some Rothko works.

Last but not least Belem is home to the ‘original’ custard tart of Portugal where it’s known as a Pastel de Belem. A place that churns out tens of thousands of them a day and gives them to you hot after you make it through the line. They were worth the wait though we later had one in Lisbon that was at the same level. It’s certainly not worth the trip to Belem just for this specific version but if you’re there anyway….

Since we had somewhat of a firm deadline on getting back to the Baixa in time to get our laundry we had to say goodbye at this point (though most of the museums were shutting anyway.) Hopping back on the bus we ended up at a Plaza near Rossio (Praca Figuera) that had a large and hopping night market underway. Deciding that the laundry could wait a few minutes we sampled various goodies, bought some cheese and nuts and regretfully decided to wait for proper food a bit later. 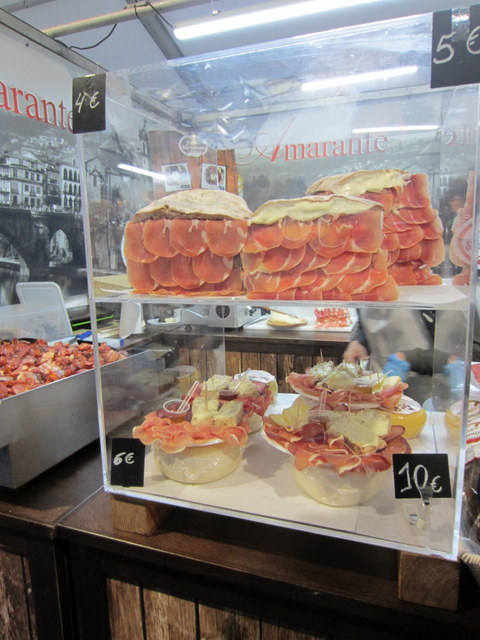 Once the laundry was stowed we set out to find some dinner. Though we thought about eating where Luis had recommended but to be honest both of us were a bit tired of ‘typical Portuguese’ as most of the restaurants insist on calling it and we went back exploring the Bairro Alto. This pretty quickly paid off though as we found another night market on an upper hill lookout that had an amazing view of the city lights. Oddly we ended up ordering some sort of tasty pork sandwich from a stand that offered a large amount of Madeiran food but ours was apparently a Porto specialty. Two Ciders, some hot Sangria and a local band later we were pretty ready for bed after a long day, especially since we had another heavy day planned. 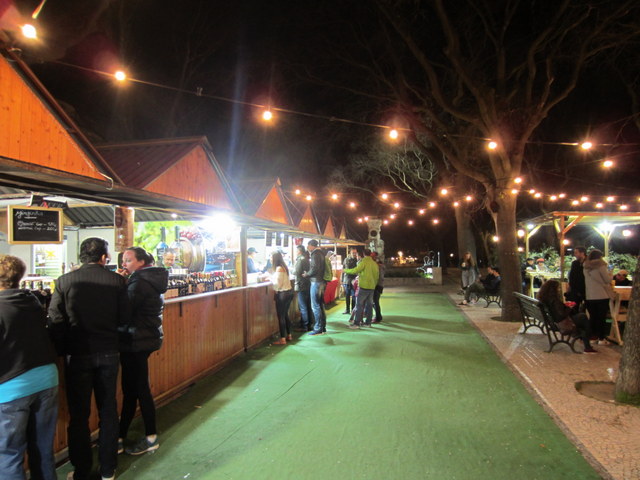